Puerta del Sol – the Place Where All Spanish Roads Start 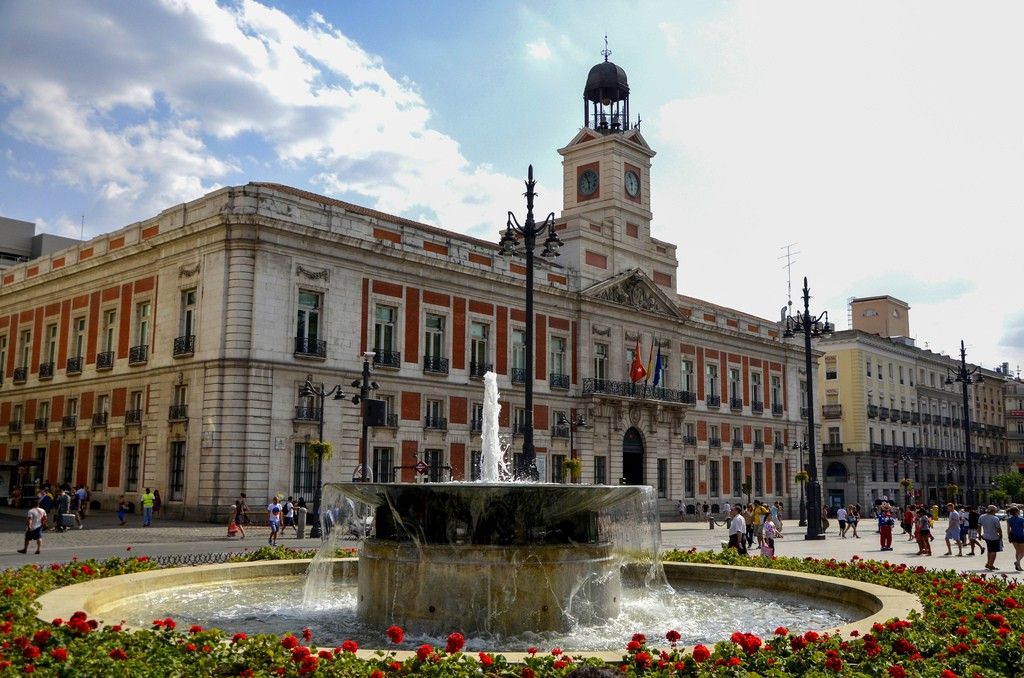 All roads lead to the Puerta del Sol. When you walk around Madrid, it’s just impossible to dodge it – sooner or later, you come to the square. The main square of the capital, whose name can be translated as “Gate of the Sun”, is situated in the heart of the city and is a meeting point of eight streets. It is considered km 0, a geographical centre of both Madrid and Spain. A bronze Km. 0 plaque is built into the pavement before the House of the Post Office. They say if you step on the mark and make a wish, it will certainly come true.

The Puerta del Sol is a special place for Spaniards, because almost all uprisings and revolutions in the country’s history began here. The square is still used as the main venue for demonstrations and protests.

Fortunately, the rallies are not held every day, so we could walk around calmly, rest by the fountains, and have fun with the kids. In the evening, the square is illuminated by three hundred spotlights and looks really magnificent. 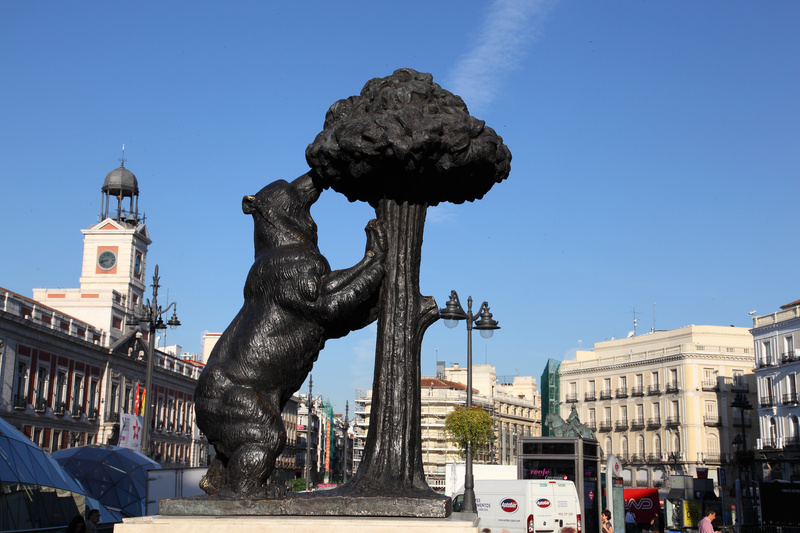 By the way, that’s where the Statue of the Bear and the Strawberry Tree – the official symbol of Madrid – is located. 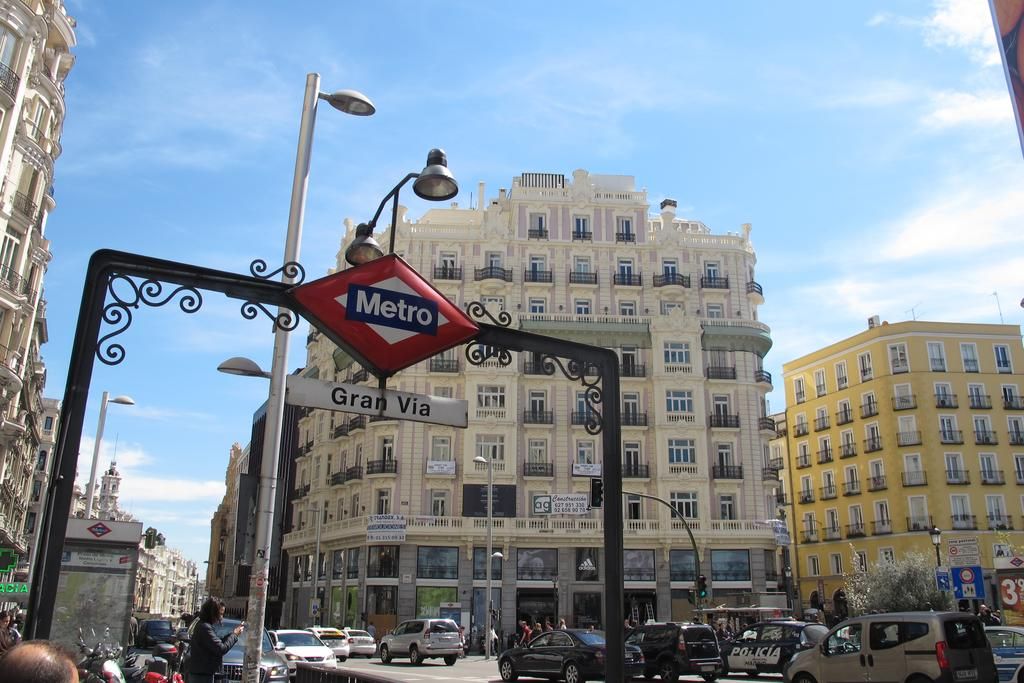 It’s easy to move around the city thanks to the well-developed transport infrastructure. We had no difficulties travelling by bus (low floors, wide doors, a special area for prams inside), but it wasn’t so hassle-free in the metro. Old stations in the historic centre are not equipped with either ramps or other facilities, so we had to bring both the pram and the kids down the stairs ourselves. By contrast, new metro stations have lifts which made our trips much more convenient. By the way, these stations are marked with special symbols on the map.

In Madrid, Uber is less developed and more expensive than in Porto. Moreover, most drivers refused to drive the boys without child safety seats. Thus we usually opted for the services of local taxi drivers (there’s a special app for calling a taxi) which was faster and more convenient. 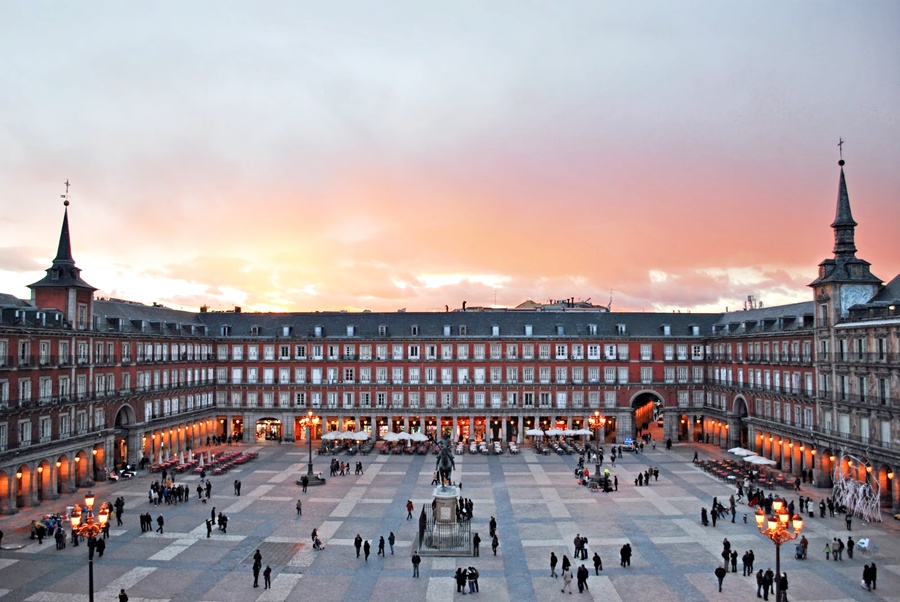 We spent a lot of time in the Plaza Mayor, one of the most popular places in the Old Town. The square was built on the site of a city park and has a curious layout – its perimeter is made up of three-storey buildings connected by passages.

There were times when the Plaza Mayor was the place where many important city events were held – duels, military parades, inquisitions, public executions, and celebrations. The balconies of the buildings (there are over 450 of them) served as the stands for nobles and could hold up to 50,000 people.

The square is constantly humming with activity. Some cafes are open 24/7. Live music is playing here, and “live statues”, which Robert and Michael Jr were so fascinated by, are organizing short performances. 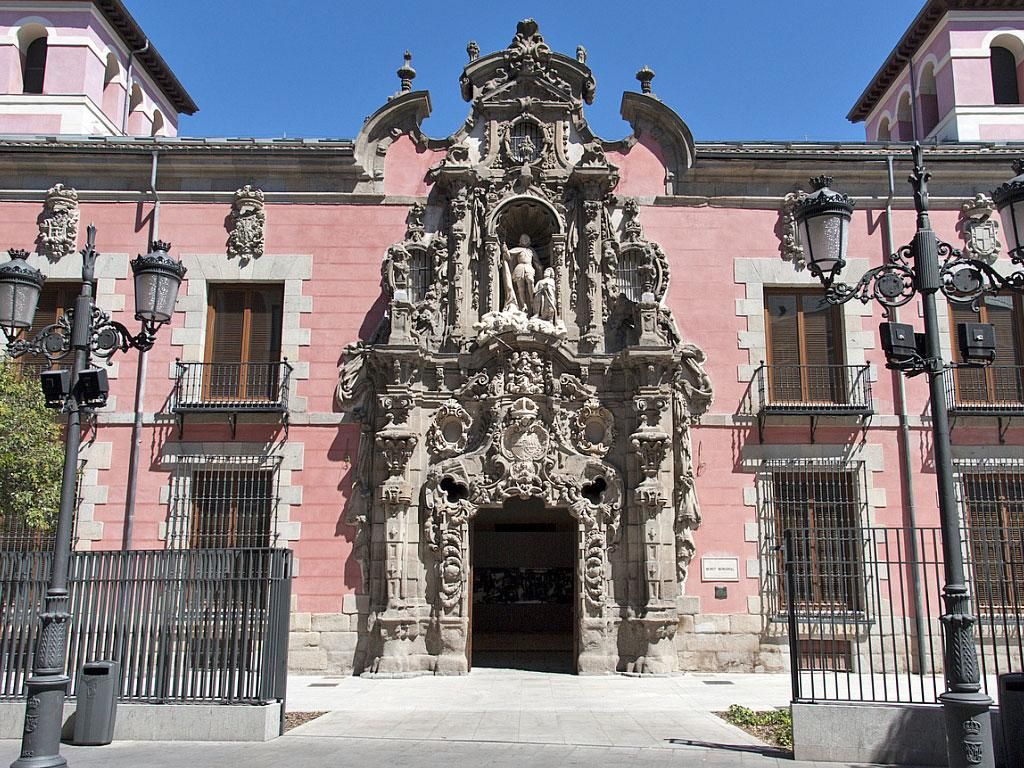 The History Museum having a large collection of old maps, topographical city models, drawings, documents, and photos showing the stages of the capital’s development deserves a special mention.

We spent only about an hour there, but we were able to see what the familiar streets and buildings were like many centuries ago. 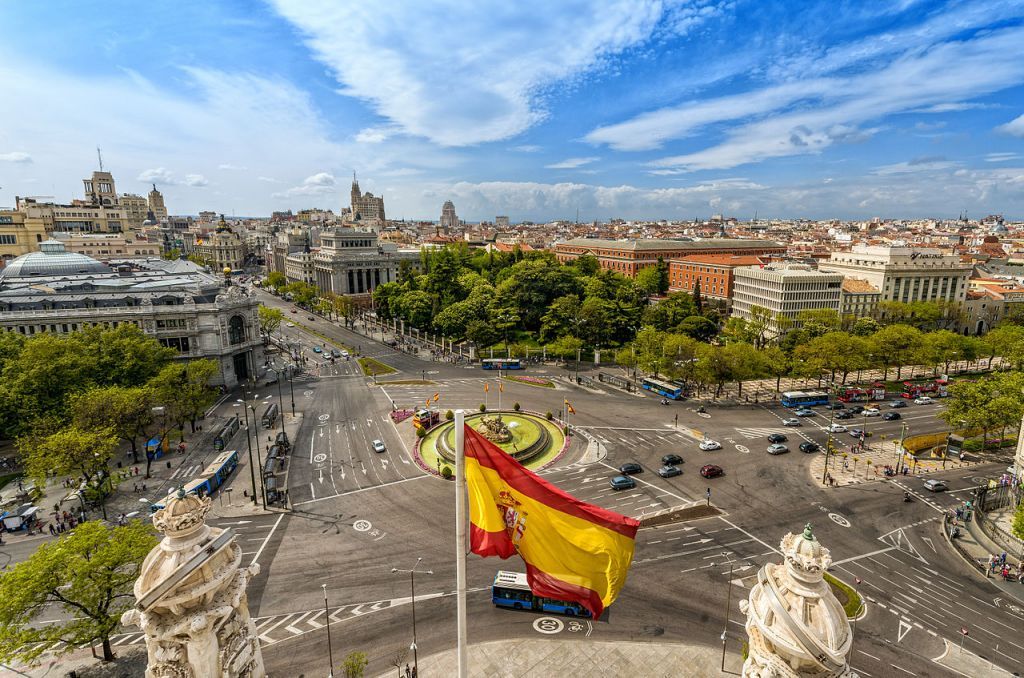 The Plaza de Cibeles located at the intersection of four streets is considered one of the most beautiful places in Madrid. The elegant fountain of Cybele named after an Earth goddess is definitely a nice decoration of the square.

We generally noticed that an abundance of fountains is a distinctive feature of Madrid. They can be found at intersections of almost all more or less significant streets. Not only are they a gorgeous adornment of the city, they also serve an important purpose of freshening up passers-by when it’s hot.

The square is surrounded by sophisticated elegant buildings. The Bank of Spain (1884), a real architectural masterpiece decorated with stained glass windows and a huge glass dome stands out among them.

The Palace of Linares is another landmark of the Plaza de Cibeles. There used to be a prison once, but the Marquis de Linares bought the land in 1872 and turned the grim construction into his own residence. Nowadays, it often hosts various cultural events and exhibitions dedicated to Latin American art.

One more prominent building in the architectural ensemble is the Palacio de Buenavista wrapped in sculptures, ornaments, turrets, decorative figures and surrounded by a picturesque garden. It was erected in 1777 for María Cayetana de Silva, Duchess of Alba, who was the painter Francisco de Goya’s muse. The place had long been the residence of the Dukes of Alba. Today, the headquarters of the Spanish Armed Forces are located here.

But the most famous palace is Cybele Palace built in the Art Nouveau style. It was nicknamed “the wedding cake” due to the abundance of elegant stucco moulding. 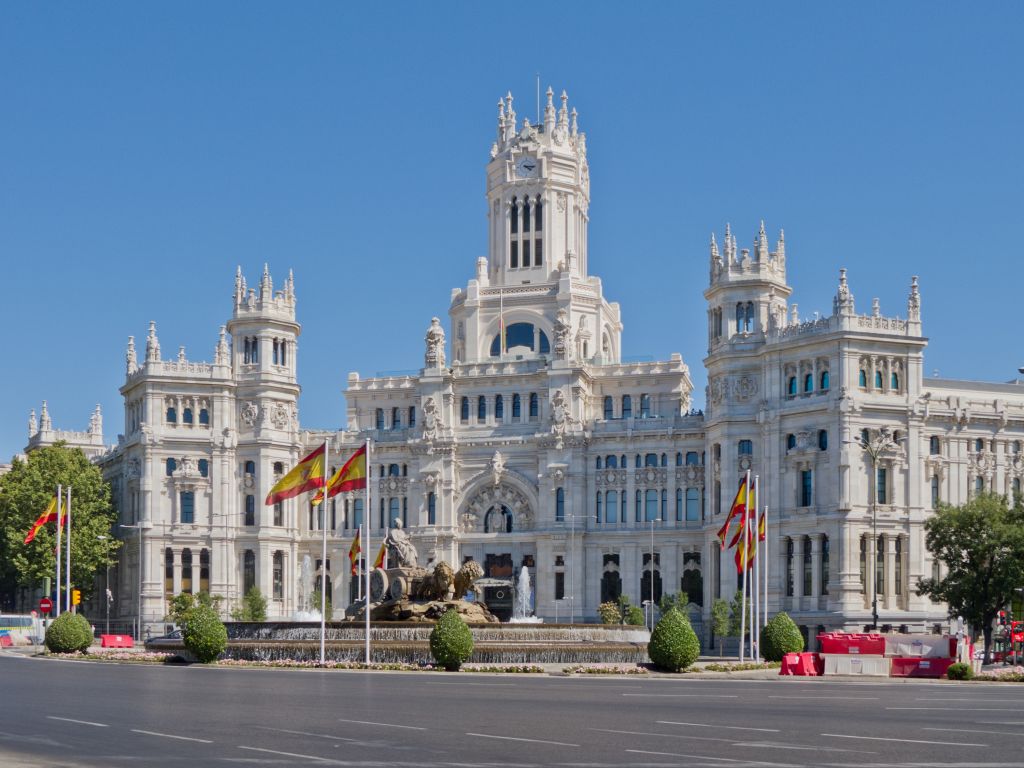 Today, the palace is occupied by the city council, but tourists are allowed to climb to the observation platform of one of the towers. There’s a community centre in a large hall with exquisite columns and arches.

Free Wi-Fi and lounge areas are available here. They are used not only by tourists but also by local students who often drop in here between lectures to get ready for the next class or just take a nap.

The Plaza de Cibeles is a popular venue for city events and celebrations. One day, we were walking near the square and got to an interesting event for children intended to improve the image of the fire service.

Beautiful installations and fully equipped fire fighters pouring kids with foam really thrilled and exhilarated little spectators. Children could get inside a fire engine, play with buttons, pull various levers, try to understand how this or that mechanism worked.

At the same time, there was an educational area with several mini-crossroads, traffic lights, and road signs nearby where older children could learn the traffic code while riding bikes and having fun.

It’s at the very same spot that a firemen band was playing AC-DC covers. Boys were even allowed to play the drums once which made them so elated.

While the musicians were prepping for the show, the boys were warming the crowd

While staying in Madrid, we rarely went to restaurants. We could always buy fresh groceries at city markets, had a fully equipped kitchen in our flat, and Helen had a desire to cook, so we usually ate delicious home-made food.

Nevertheless, we didn’t miss the opportunity to try local delicacies. It was in Madrid we tasted ceviche – a dish from raw sliced fish cured in lime juice – for the first time. Later, however, travelling around Latin America, we realized that the original ceviche was far from the Madrid version, but the dish had still been good. 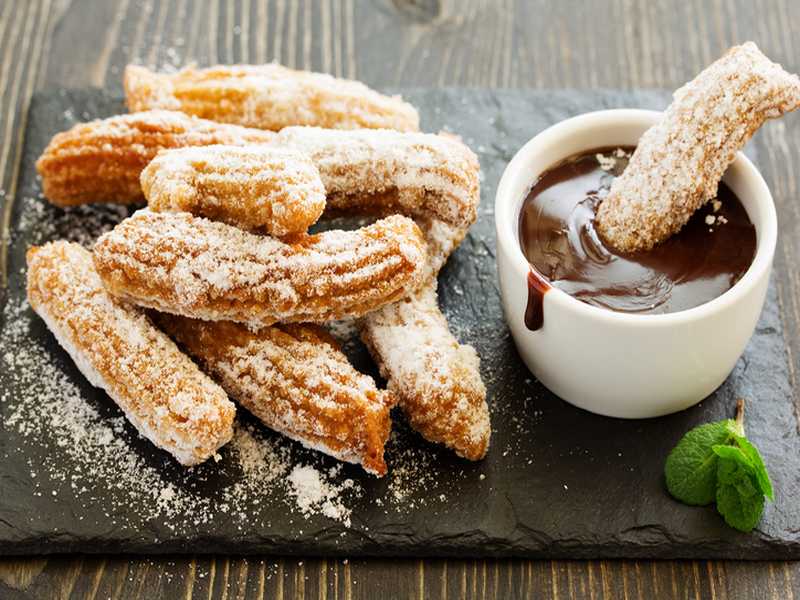 We also had a chance to visit Chocolatería San Ginés, Madrid’s oldest café, working since 1894. We ordered traditional churros, which are tasty choux pastries fried in sweet syrup and served with a hot chocolate dip. The dessert turned out to be very rich and delicious. Even the boys liked the pastries, though they ate churros without chocolate.

An evening stroll before sleep