The weather in Porto got worse by the end of September. North winds brought the real cold, and we were afraid that it would be as cold in Madrid. However, to our delight, the capital of Spain welcomed us with a bright sun. We were enjoying the lovely summer-like weather till late October, which let us explore the city to the fullest.

We’d been dreaming of visiting Madrid for many years as it’s both the historical and political capital of the country. The flat we were renting was very cosy and located near the city centre. It was a good apartment in an old but fully renovated house. The place was very convenient and suitable for living with children – even the balcony (though small and not particularly useful) was all covered with a safety net.

The hosts arranged an area for kids with various toys and furniture. While we were unpacking our stuff and settling in, the boys immersed themselves completely in playing and studying new entertainments.

The location was another undeniable advantage of the flat. Madrid’s most interesting landmarks were within walking distance.

The earliest historical records about the city date back to the 10th century. Moorish Emir Muhammad I built a fortress called Magerit as another way to protect Toledo. A small settlement grew around the fortification and was conquered by King Alfonso VI in 1085. That’s how the area of the present-day capital became part of the Kingdom of Castile and then the Spanish Empire. 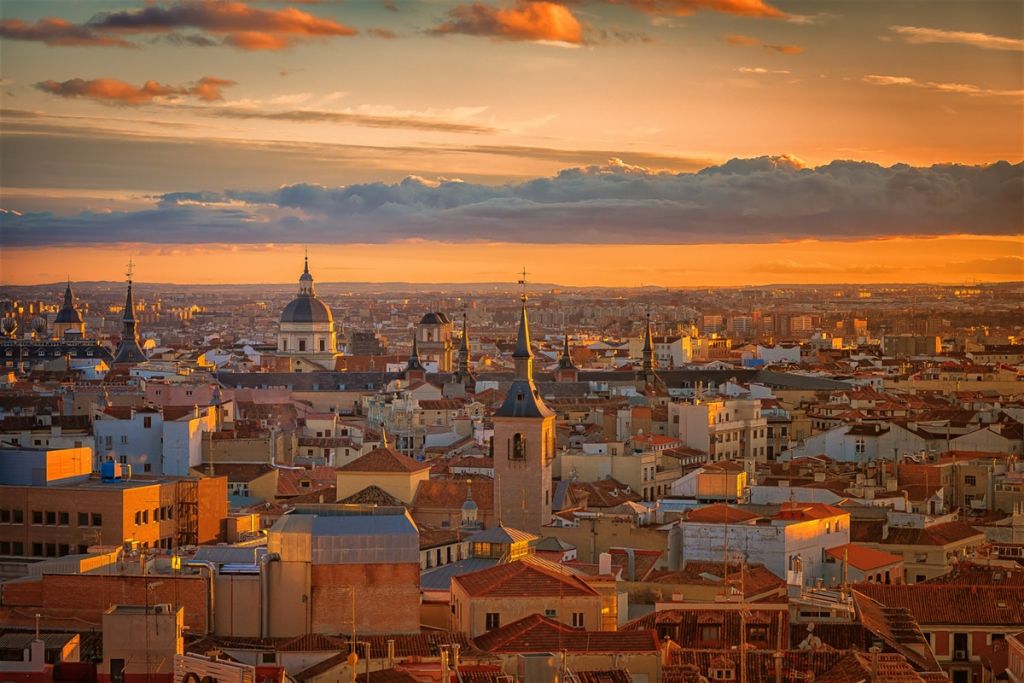 The city had remained unknown and insignificant for five centuries until King Philip II decided to relocate the capital of Spain from Valladolid to Madrid in 1561. Over the next 50 years, the city was growing and developing. King Philip himself took an active part in designing new buildings. A huge architectural complex and former residence of the El Escorial royal family located within only an hour’s drive from Madrid still reminds of the reign of King Philip.

The Golden Age of Madrid is considered the time when King Charles III was on the throne. Renowned architects from all over Europe were invited to the city in the second half of the 18th century. Thanks to the monarch’s skilful rule, medieval Madrid turned into a neoclassical one with paved streets, elegant mansions, and illumination.

The city’s growth temporarily ceased due to the Spanish Revolution, however, in the mid-19th century, the development of the capital was renewed thanks to Queen Isabella II. The next building boom occurred in the early 20th century. Hundreds of new Art Nouveau buildings arose in Madrid changing the city layout to a more modern one. 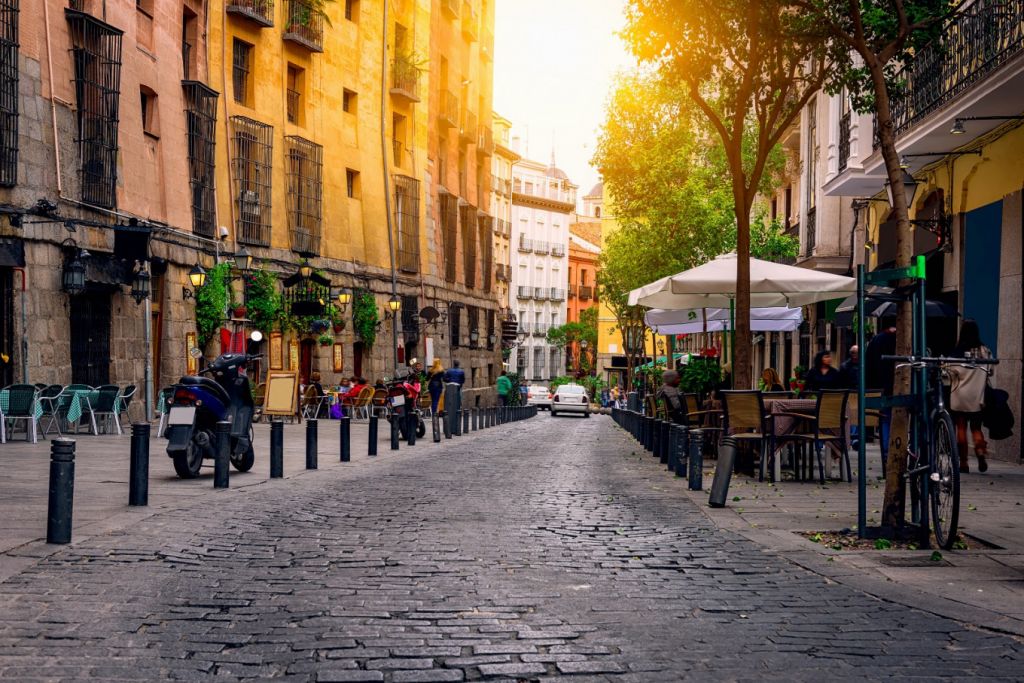 You can still trace the natural gradation of centuries here. Walking around the city, we noticed how medieval constructions were gradually being replaced by luxurious facades of neoclassical houses and then more modern blocks of flats and office buildings, how narrow streets were changing into broad avenues and huge squares.

At the very beginning of our journey, we tried to come up with a convenient schedule. Mornings were cultural – that is, we visited museums and interesting landmarks. We tried to come back home by lunch as the boys slept better and longer in silence. If the tour or trip we planned was going to be long, we put the babies in the pram and covered them with a warm blanket. While we were studying pieces of art in the museum hall, the boys were able to have a good sleep.

As for evenings, it was always the time entirely dedicated to our kids. We spent time at playgrounds (Robert and Michael Jr enjoyed the variety of physical activities) and treated the babies to tasty local dainties.

Our babysitter travelled together with us again and looked after children at night, which gave us the opportunity to have a good sleep and “charge up” for the next day.

We fell behind schedule only once – when our parents came to visit us. The grannies were happy to take care of the babies, so the babysitter had almost no responsibilities during the time. Later, she wasn’t able to get back to the usual working routine and generally seemed detached from the care of the children. She stayed in her room almost all of the time getting out only to have a walk or when we were not around. She continued looking after kids at night, but we didn’t see her in the daytime anymore. Then she said she was ill and didn’t do any work for almost a week, after which she told us she didn’t want to continue working with the boys and was going to come back home.

We hadn’t expected our babysitter to leave us like this so suddenly. We were shattered as we primarily needed a babysitter for our journey around Latin America. We had no time to find a responsible trustworthy person who would get along with the boys, so we realized we would have to look for a babysitter in Mexico already. Meanwhile, we were going to continue walking around and exploring Madrid. 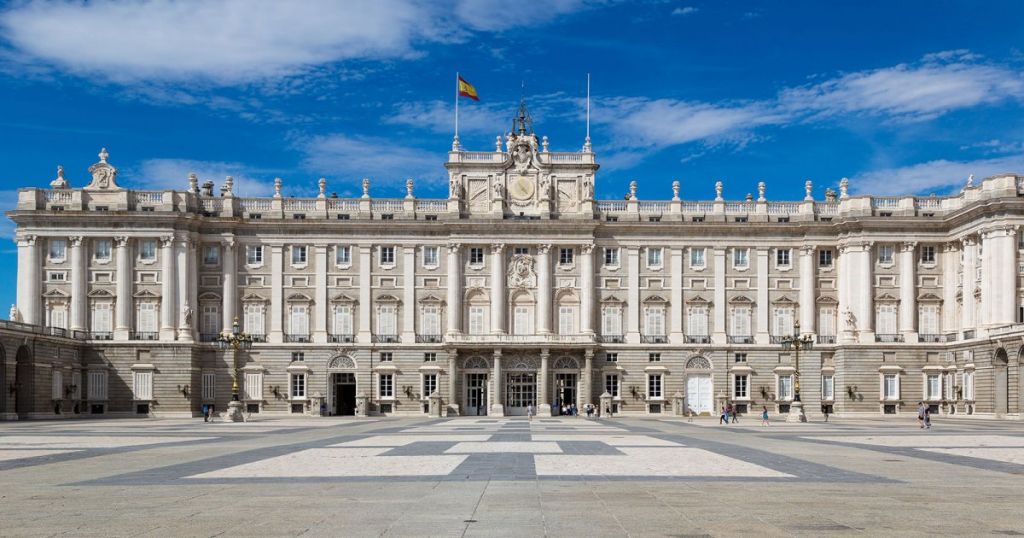 The Royal Palace of Madrid located by the Manzanares River is the most famous landmark of the city. The huge building with a majestic facade faced with granite and marble is a typical representative of Baroque architecture.

The interior of the residence is as impressive as its exterior. The walls and ceilings are adorned with frescoes by Luca Giordano, Caravaggio, Diego Velázquez, Francisco Goya, and other talented artists of the 18th century. Gilded furniture, large crystal chandeliers, paintings and Flemish tapestries, porcelain items, a collection of Stradivari’s violins, unique old weapons are the things that make the palace one of the most interesting museums in the capital. It’s quite a challenge to get inside. There’s always a queue of tourists that you can stand in for about half an hour. It’s much more convenient to book tickets online on the museum’s official website. 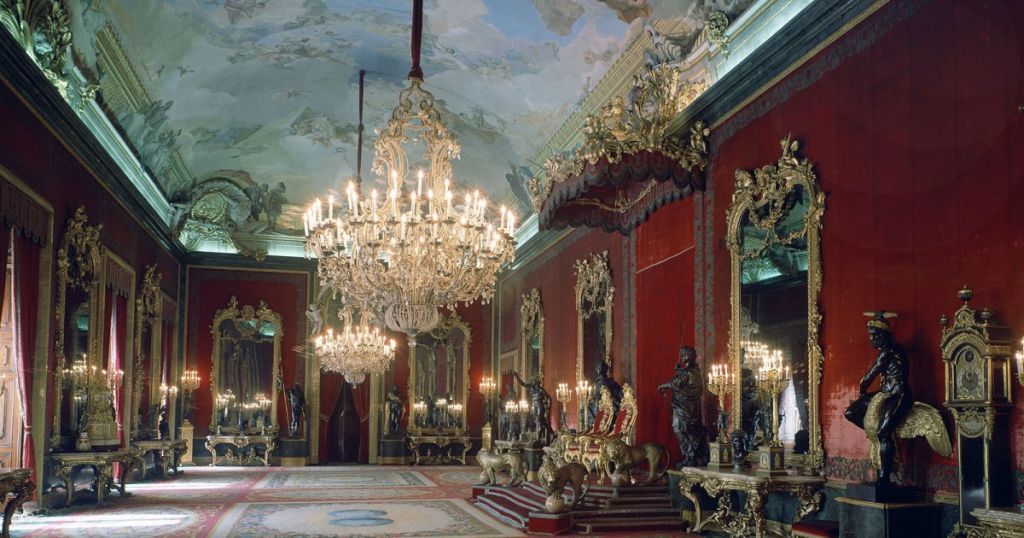 A picturesque park called Campo del Moro was created around the residence in the 19th century. Our flat was a few minutes’ walk from it, so we often strolled along its tree alleys admiring beautiful fountains and flowerbeds. The babies loved spending time by a small lake watching ducks, swans, and almost tame peacocks.

The northern part of the palace faces the Sabatini Gardens. The park was made in the French manner. Geometrically shaped flowerbeds, neatly clipped bushes, fountains, and a small lake surrounded by sculptures look truly magnificent. 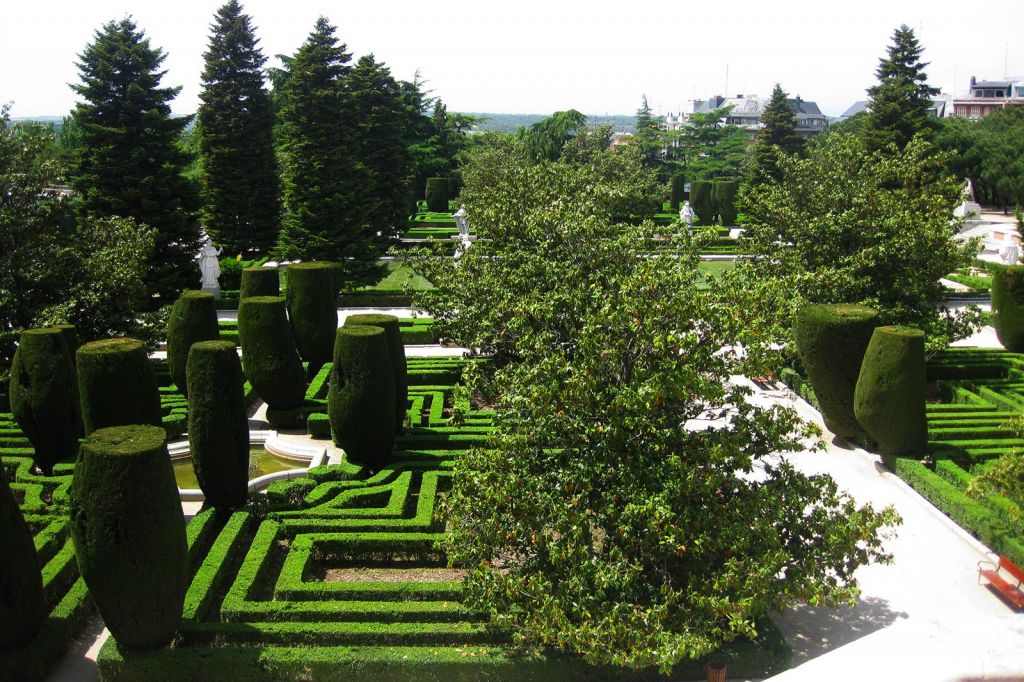 A square before the palace is another popular venue for different activities. We often saw youngsters riding road bikes and learning extreme stunts there. 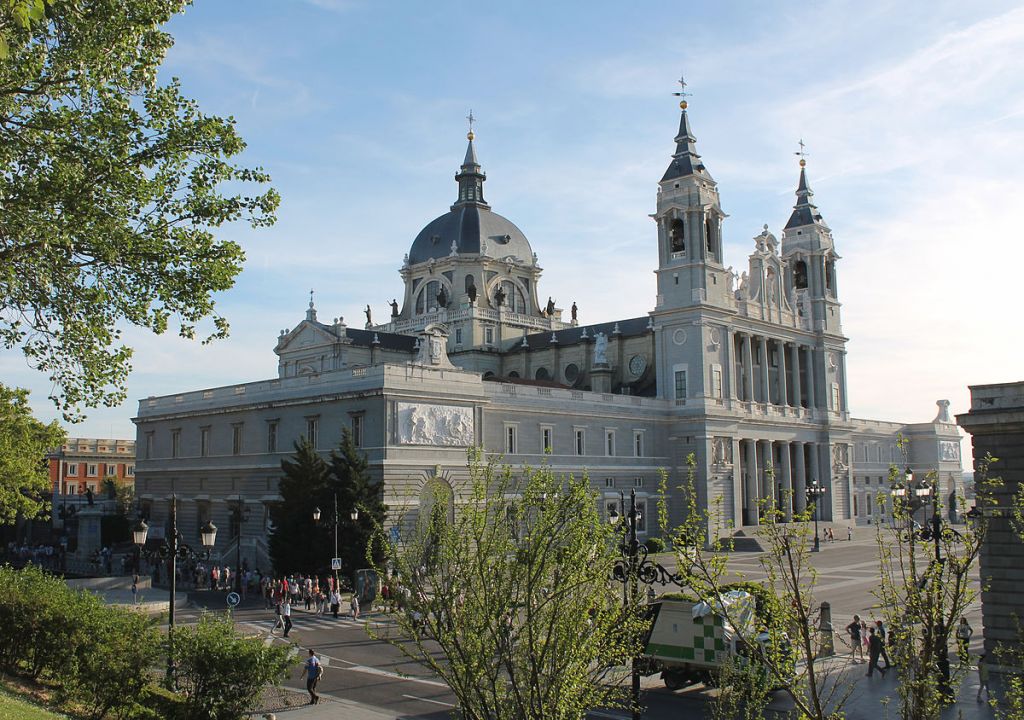 It’s hard to imagine the capital of Spain without Almudena Cathedral, an impressive building rising next to the Royal Palace. It took over a hundred years to erect the church, but it’s a special place for each Madrilenian. According to legend, the cathedral was built specially for preserving a treasure – the statue of the Virgin of Almudena brought here by James the Just in the 1st century. Indeed, one of the crypts of the huge church contains a sculpture of the patroness of Madrid, though it dates from the 16th century.

The construction is modern, especially its interior. We didn’t feel the spirit of old times there. Nevertheless, despite the simplicity of the interior decoration, the church impressed us with its size. There’s an observation platform in the dome of the 73-metre-high cathedral which has a bird’s-eye view of the city.

We were pleasantly surprised to find the capital of Spain had an abundance of playgrounds. They can be found in almost any park and yard. Whichever part of Madrid we were exploring, we came across a new playground in a few minutes. There were sandpits, slides of different sizes, chain bridges, swings. The boys were really thrilled, and we were glad we could constantly offer our children new entertainments. Sometimes they managed to play at several playgrounds within an evening. 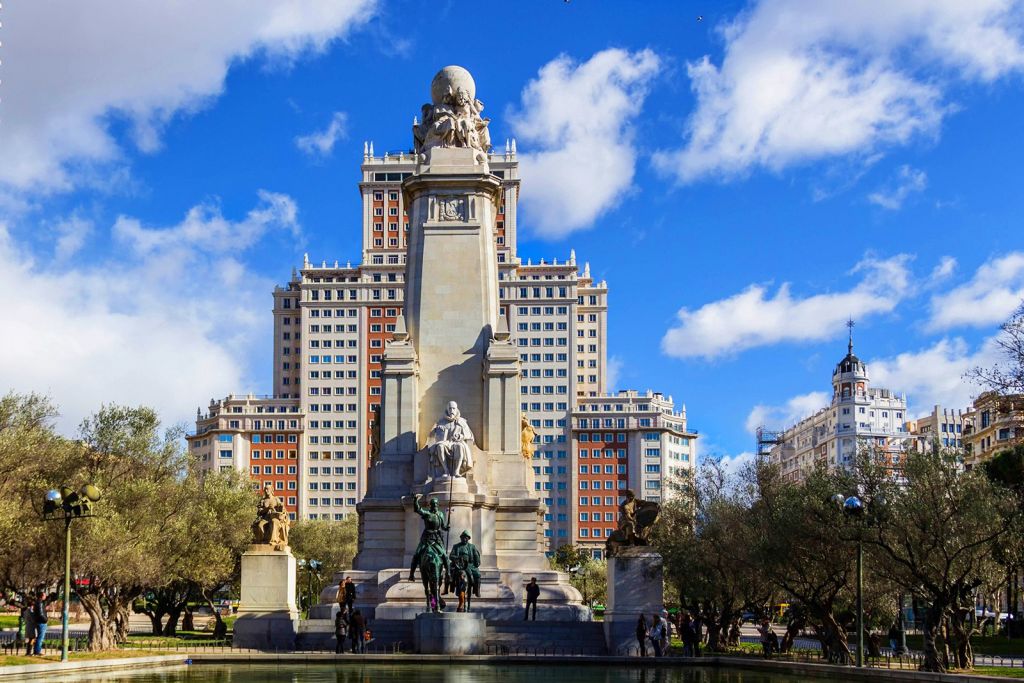 Plaza de España – one of the most remarkable places in Madrid – is located near the Royal Palace. There used to be a park several centuries ago which was later replaced by a monastery. However, no monk had ever actually arrived here, and the place ended up being inhabited by Napoleon Bonaparte’s soldiers. The barracks were demolished in the early 20th century which was followed by the construction of a square started in 1911.

The square always swarms with pigeons that everyone enjoys feeding.

You can’t help noticing two skyscrapers built in the mid-20th century – the 30-storey 142-metre-high Torre de Madrid and the 125-metre-high Edificio España. The Torre de Madrid was nicknamed “the giraffe” as it had been the tallest concrete building in the world for several years. 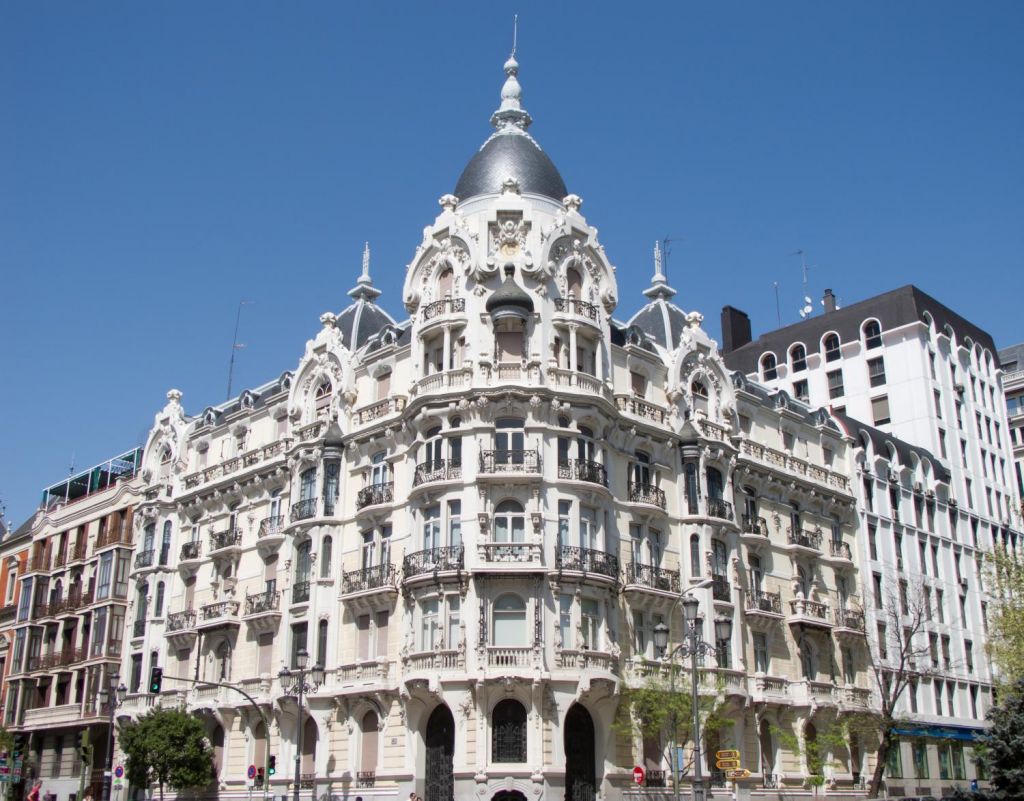 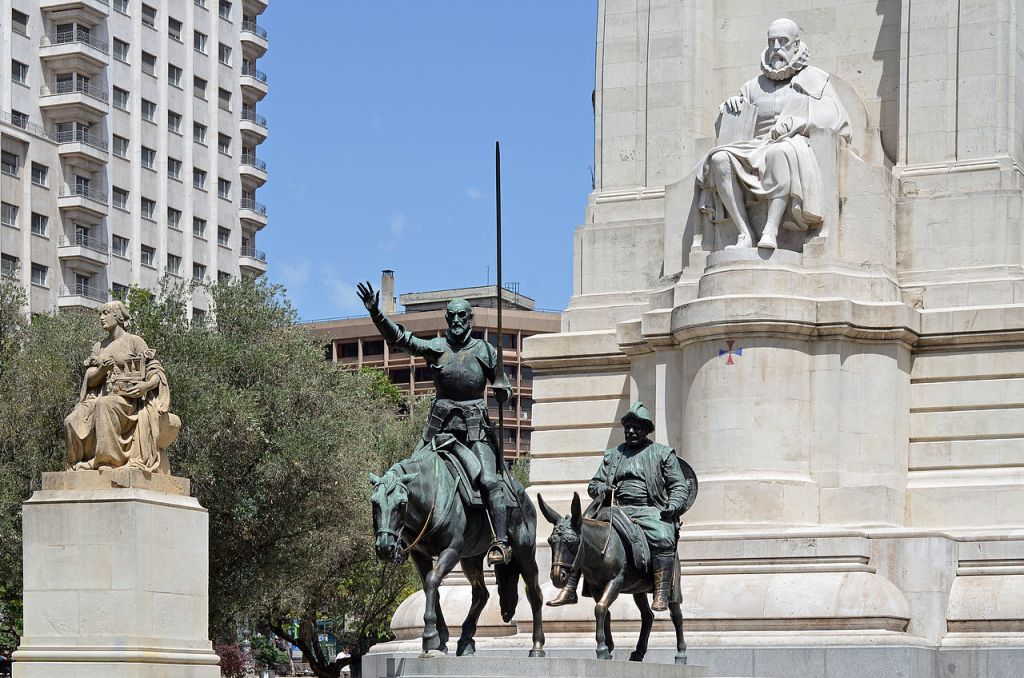 However, the main part of the square is definitely the monument to Miguel de Cervantes that perpetuates not only the Spanish writer himself, but also his legendary characters – Don Quixote and Sancho Panza.