Walking in the centre, you can’t help noticing a majestic red-brick building constructed in the Neo-Mudéjar style. It’s the Las Ventas bullring erected in the early 20th century when corridas were particularly popular. 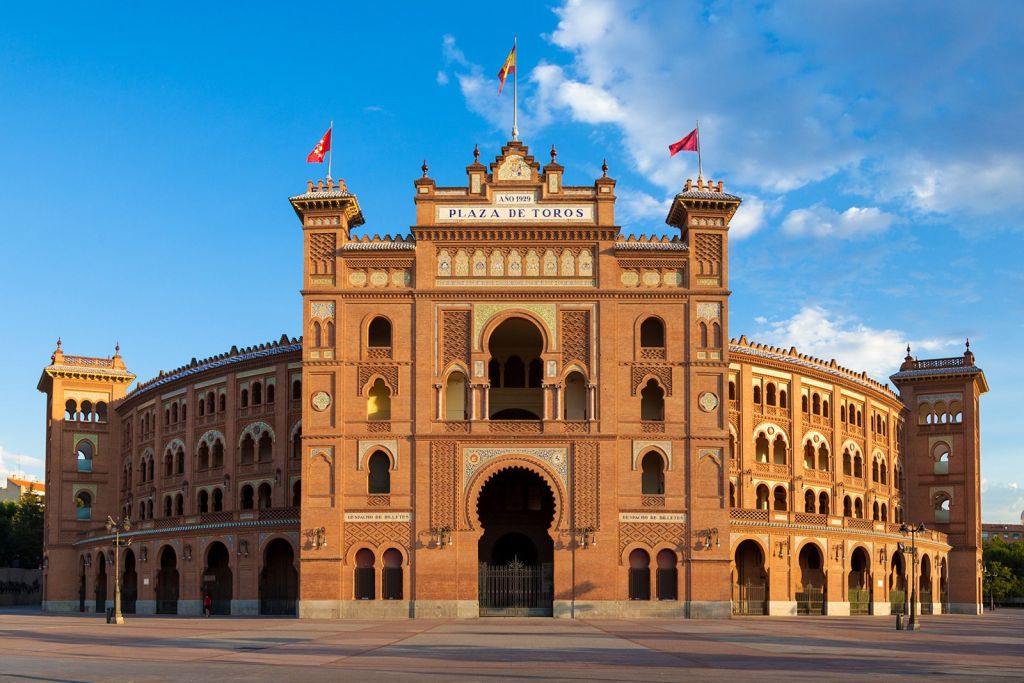 Bullfights are held from March to October, but Las Ventas doesn’t stand empty at other time as well. Concerts, sports competitions, and various cultural events are organized here. There’s also a small bullfighting museum within the arena. It exhibits the portraits and biographies of famous matadors as well as bullfighting equipment and outfits. 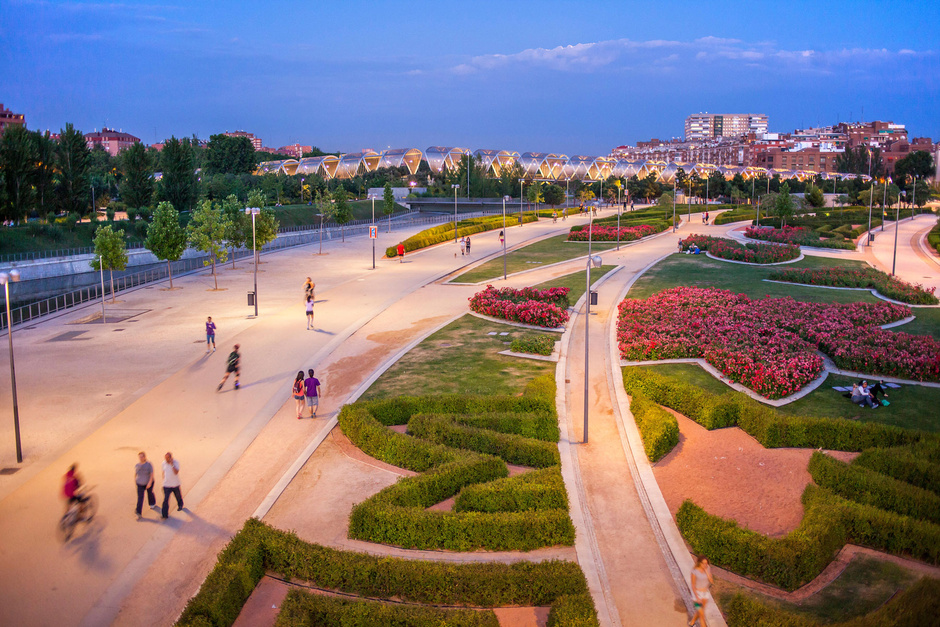 We often visited the Madrid Río Park located along the Manzanares River. It took just a couple of metro stations to get there.

Madrid Río is a huge recreation area of almost 700 hectares. The park has all sorts of things: pine groves, colourful flowerbeds, several dozen playgrounds as well as bicycle lanes, fountains, tennis courts, climbing walls, and even a beach. The river can be crossed over one of the pedestrian bridges.

Robert and Michael Jr really enjoyed our walks. They were roller-skating here for the first time. Of course, they didn’t learn to roller-skate by themselves, but they were exhilarated by the process. We usually spent a few hours in the park walking along the riverfront, listening to street musicians, and watching improvisational puppet shows. 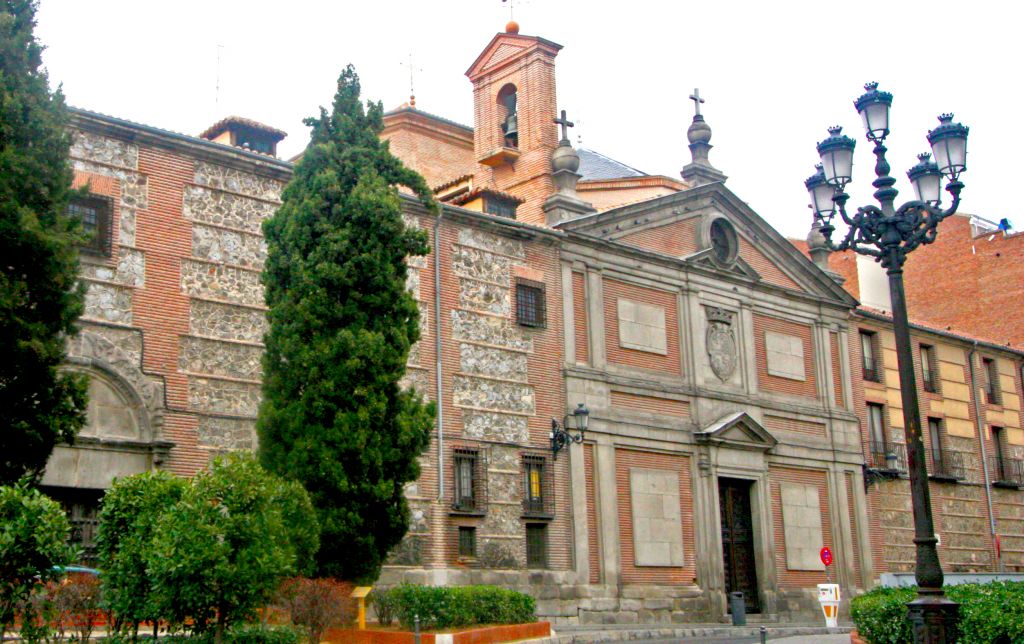 The Convent of Las Descalzas Reales (“Monastery of the Royal Barefooted”) located in the city centre can boast not only the treasures kept within its walls, but also its unusual history. The building once served as a residence of Spanish kings. However, in 1559, Princess Johanna of Austria gave it into the Order of Saint Clare’s possession.

The convent had been a sanctuary for girls from noble families for centuries. Becoming nuns, they were freed from the need to marry the people their parents imposed on them. The brides’ hefty dowry went to the convent which quickly made it one of the richest and most influential monasteries in Spain. As for the “princesses”, they lived in poverty praying according to their vows. 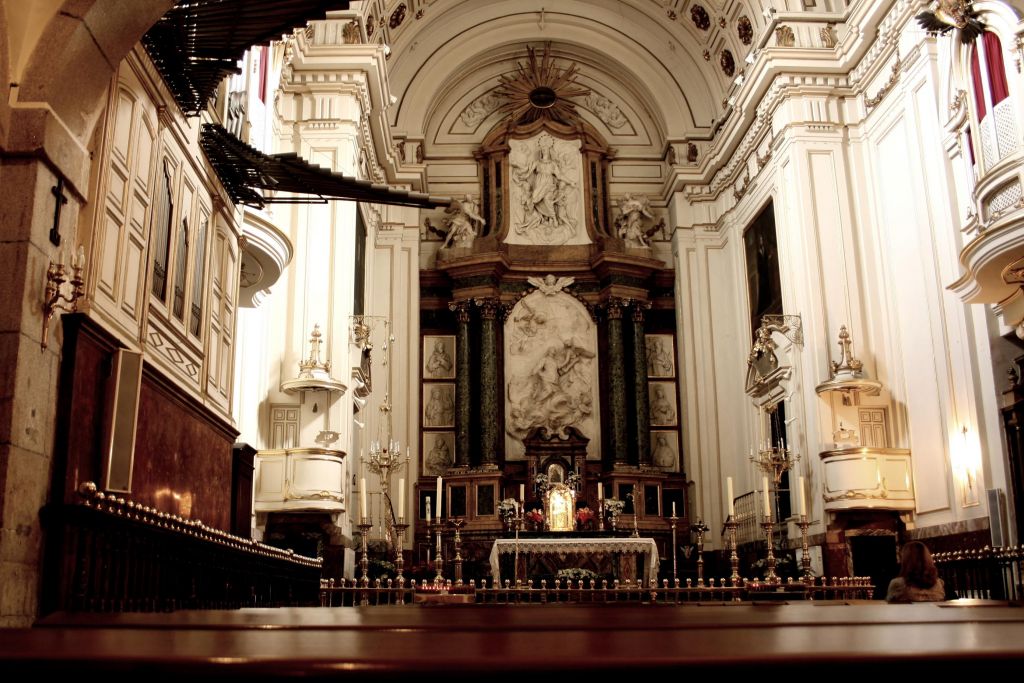 The place is still used as a convent, therefore it can’t be accessed. However, a part of the building is occupied by a museum where the paintings by famous artists (Titian, Rubens, and many others) as well as a collection of marble sculptures, tapestries, old coins, silver- and crystalware are on display. The tours are held in Spanish only, but you can take a booklet in English containing the info on the exhibits.

There’s a temple in the Parque del Oeste that doesn’t fit with Madrid’s architecture. The Temple of Debod is a piece of Egyptian culture in the heart of the Spanish capital. It’s the real shrine of Isis erected on the bank of the Nile in the 2nd century BC. 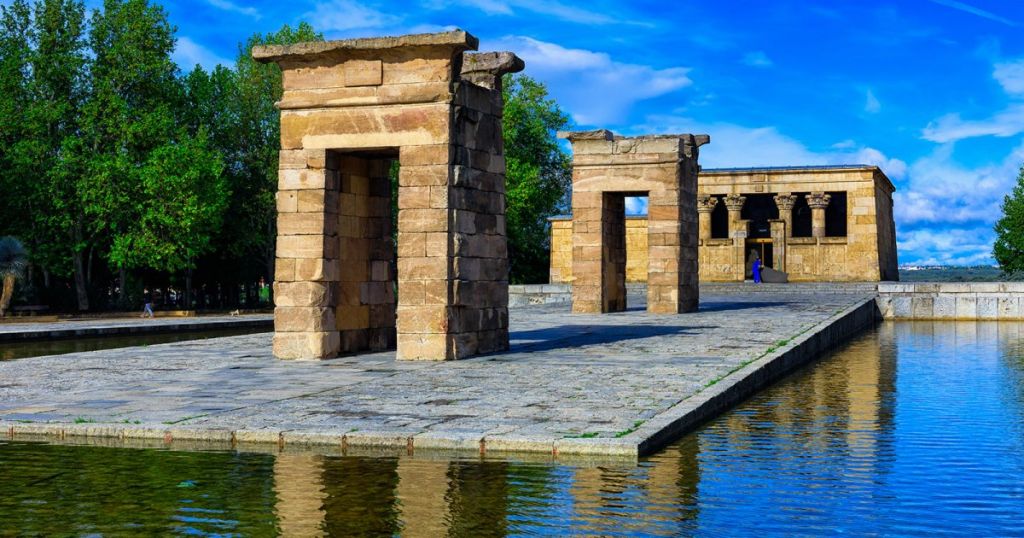 In 1968, the Egyptian government decided to present the temple to Spain in gratitude for their help – Spanish engineers worked on the Aswan Dam helping to salvage the Abu Simbel temples and other architectural monuments from flooding. The shrine was dismantled, transported to Madrid, and reassembled carefully.

The temple looks particularly mysterious in the evening. There are always lots of people gathering here to relish the bright colours of sunset.

We surely couldn’t miss the opportunity to visit the Madrid Zoo considered one of the largest zoos in the world. About 6,000 animals live there.

The zoo is divided into zones depending on the natural habitat of animals. It has an oceanarium inhabited by gigantic turtles, sharks, and colourful tropical fish. A few dozen aquariums of different sizes contain lizards, crocodiles, and other reptiles. There’s even a dolphinarium.

Animals feel free and comfortable here. For example, monkeys are not locked in pokey cages, instead, they move around a spacious enclosure with trees and slides.

Some birds are flying right over visitors’ heads which makes you feel at one with nature.

Robert and Michael Jr especially liked a mini-farm with sheep, donkeys, and piggies. It was allowed to feed all animals and take a photo with them.

A special area dedicated to dinosaurs is of particular interest. There are both real skeletons of the extinct animals and sizeable rubber figures. Some of them are interactive. A dinosaur starts to move and roar at a certain moment. Our boys got a bit frightened at first, but then were thrilled with the formidable moving figures.

The zoo organizes various performances every day – the schedule is given together with an entrance ticket. All shows are aimed to engage the audience in the action. For example, during the eagle feeding show, a trainer called out a child, put a protective glove on his hand, and sat an eagle right on his arm. The little kid was just over the moon! We also enjoyed the show with seals.

The park infrastructure is well thought-out. Each enclosure has a board providing interesting information on the animals and their habits. There are small cafes and lots of recreation areas in the zoo, so you can easily spend all day with kids here. 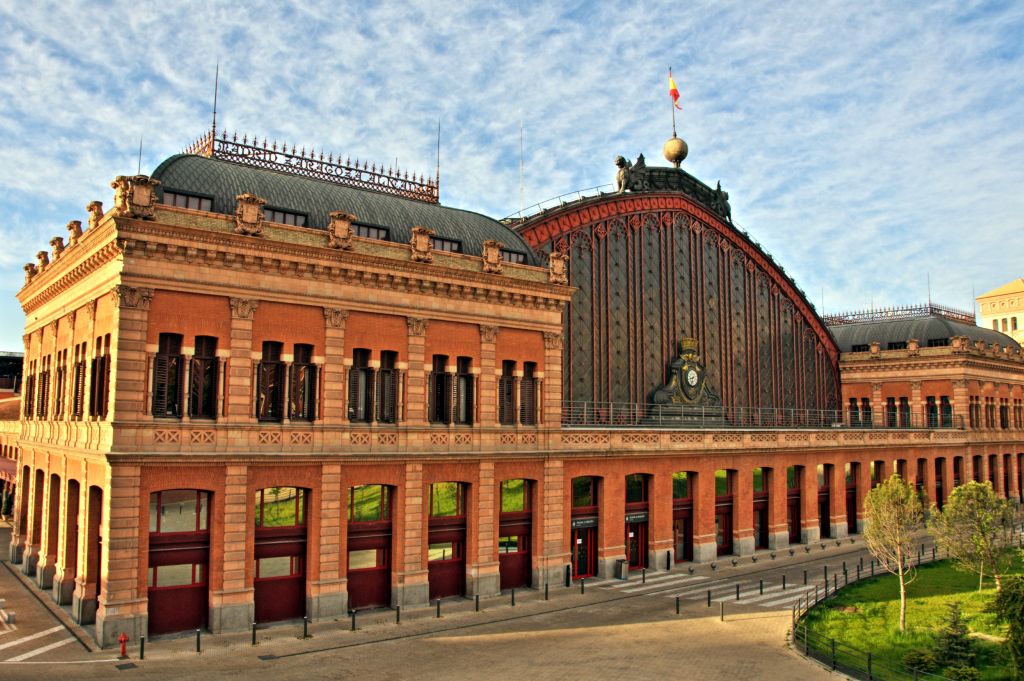 Madrid Atocha is not only the largest railway station in the country, but also an interesting landmark. Rafael Moneo, a Spanish architect who was in charge of the reconstruction of the railway station in 1992, created the unusual place. 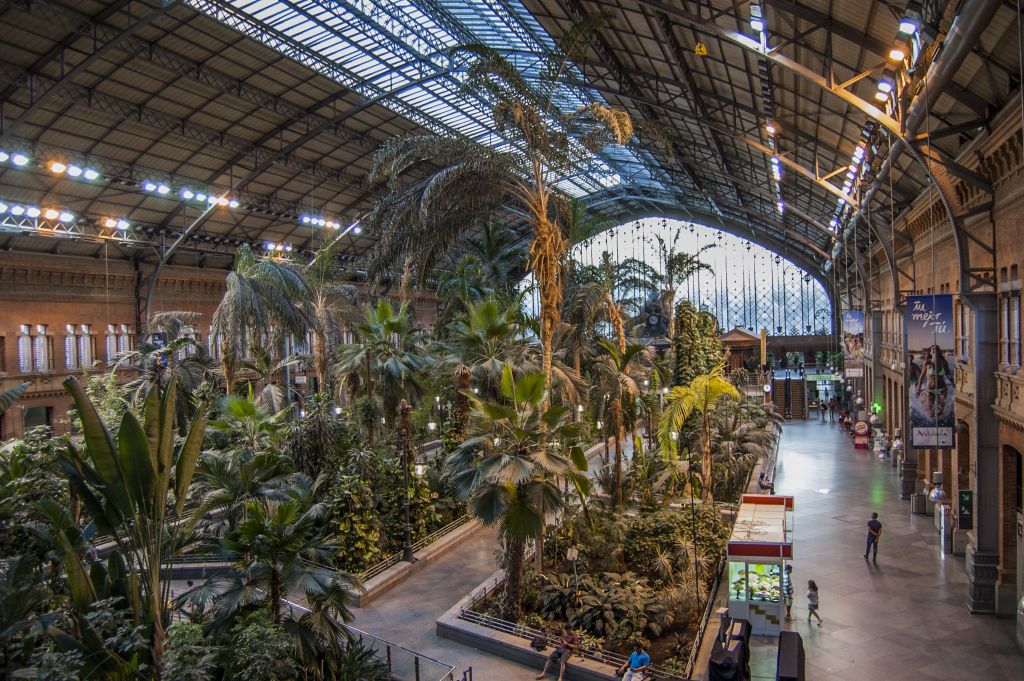 A real tropical garden was laid out in the huge glass-domed hall. Palms, exotic flowers, a small pond with fish and little turtles, the pleasant cool, and relaxing music turn the waiting room into a real botanical garden. The railway station has three floors, but instead of escalators, flat moving walkways are installed here, which makes it much easier to travel with a pram.

Our visit to the largest naval museum in the country was very entertaining and informative. The collection of exhibits illustrates the history of the Spanish Navy from the 15th century till today (the modernized Invincible Armada still functions). 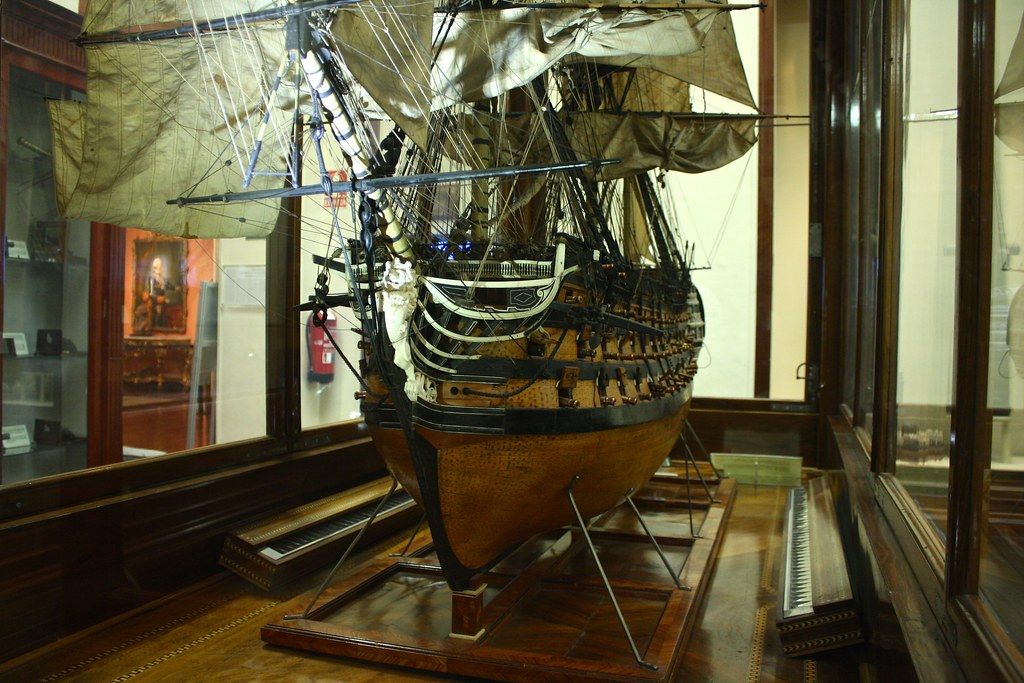 It was interesting to look at the impressive collection of ship models as well as the collection of old maps, combat weapons, navigation devices, and sailors’ personal things. There’s a special exhibition collecting the treasures and objects brought by discoverers from other continents and conquered territories. 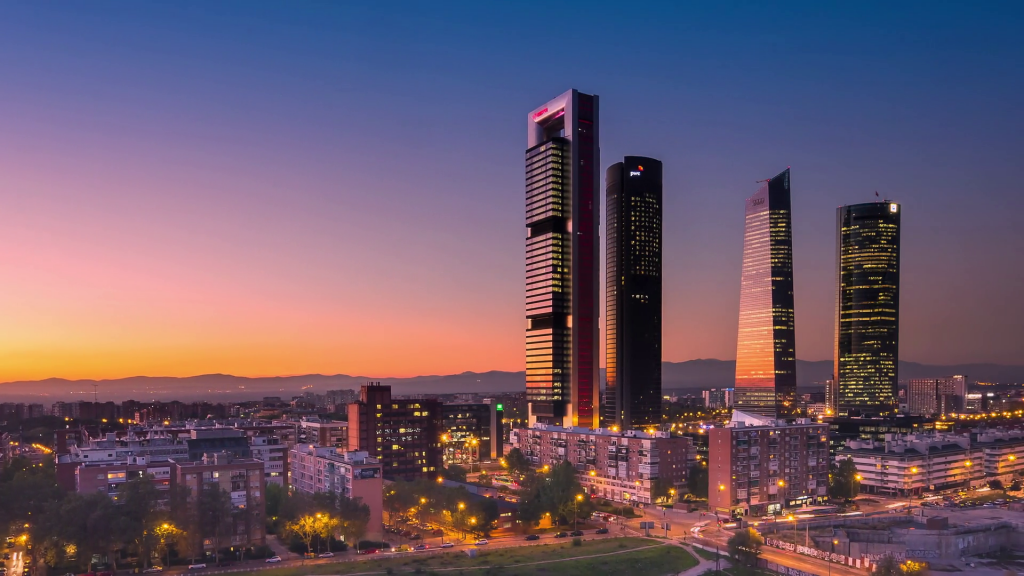 It was interesting to look at Madrid from a completely different side, to see not only a medieval capital but also a constantly growing and developing metropolis. 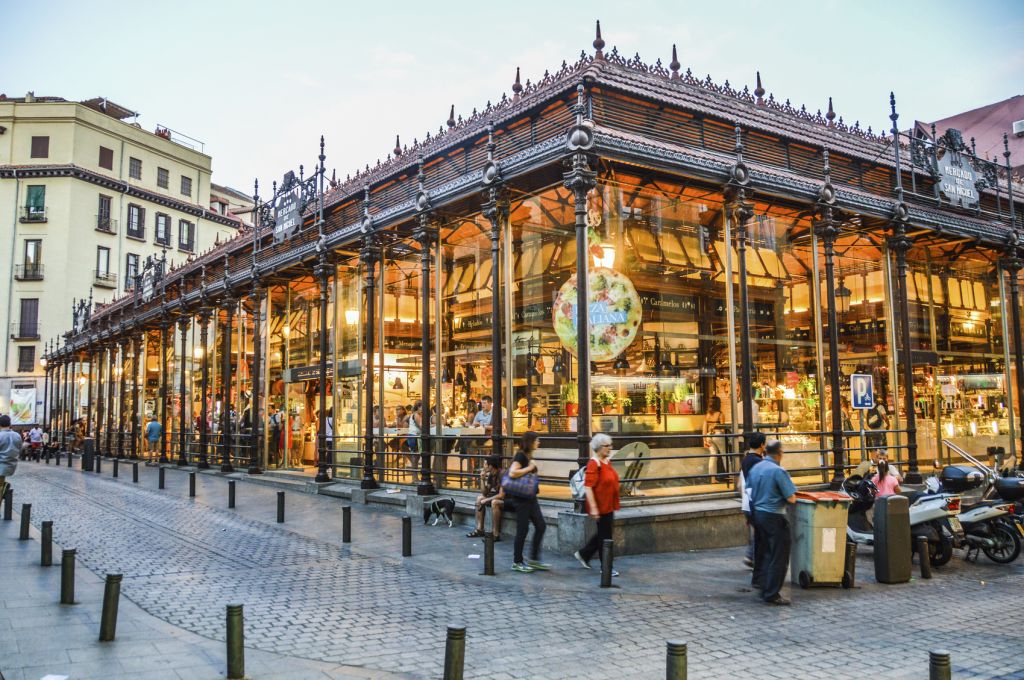 If you want to see the real Madrid and feel the unhurried and relaxed pace of the city life, you need to visit local markets. “Mercados” are not just a bunch of stalls and kiosks selling groceries. They are bright colourful centres of gastronomic culture. You can taste local delicacies at cosy cafes, relax drinking a glass of vermouth, and even take part in a culinary masterclass and learn to cook classic Spanish dishes. 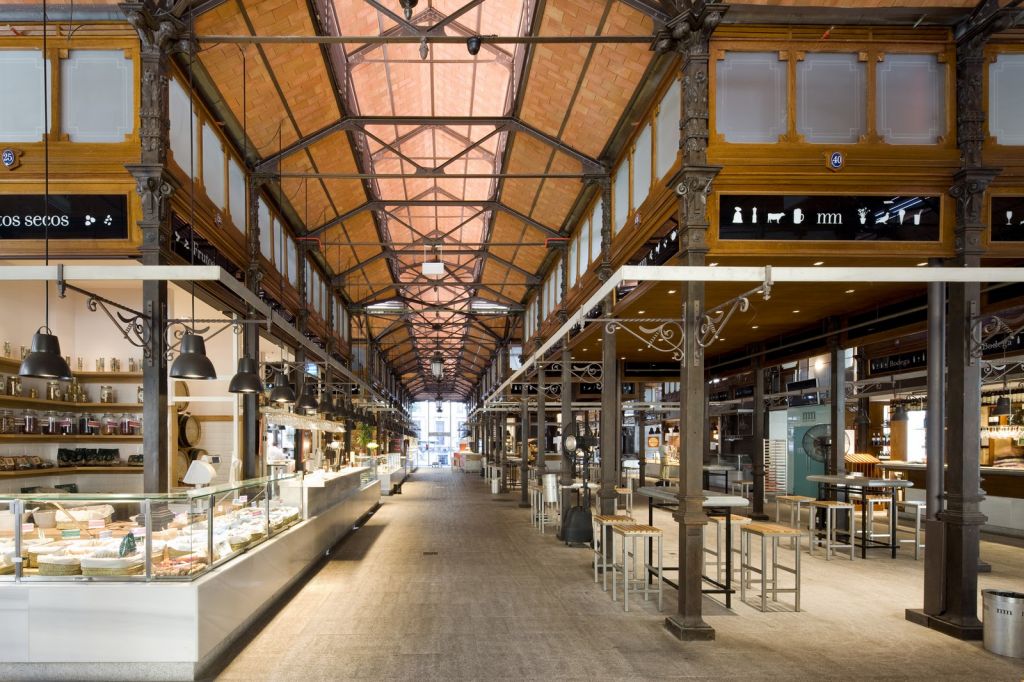 The Market of San Miguel located in the centre of the Old Town is probably the most popular one among tourists. As for local citizens, they mostly prefer Mercado de la Paz and Mercado de Antón Martín.

We faced an interesting problem in Madrid:  almost no one spoke English. While we had the chance to get the necessary information in tourist centres, it was quite tough to deal with common issues in everyday life.

For instance, Robert and Michael Jr needed to be vaccinated according to the vaccination schedule while we were in Madrid. That’s when we discovered it’s almost impossible to find an English-speaking doctor there. We weren’t even able to explain the situation to the doctor and tell them about the history of the babies’ vaccination, so we decided to defer it and do that in Mexico.

As for taxi drivers, market salespeople, and most waiters, we had to use Google Translate everywhere to be able to explain ourselves. By the way, not all Madrid museums have the information about exhibits translated into English and English audio guides. It definitely makes sense to learn at least a couple of Spanish phrases before the trip.

Despite the minor inconveniences, we liked Madrid. The city of museums, vast squares, gorgeous parks, and street performers turned out to be lively, bright, and hospitable. We were also lucky to have sunny weather till late October. We had to put on our sweaters only at the end of our visit.

Getting ready for a transatlantic flight and new adventures in Latin America, we decided we would certainly come back to Madrid sometime.