Sintra is a unique place full of castles, landmarks, and various antiquities. It’s a resort town that used to be popular among Portuguese monarchs, which is why it’s crammed with palaces, villas, and other royal residences.

The Palace of Sintra is the central (in every sense) landmark of the city. It’s easy to reach it as it’s located in the centre, near the railway station. The present-day palace was built in the 14th century (it was constructed on the site of the Castle of the Moors). It’s a snow-white building complex made in the Manueline style (Portuguese Renaissance) mixed with the Mauritian style. 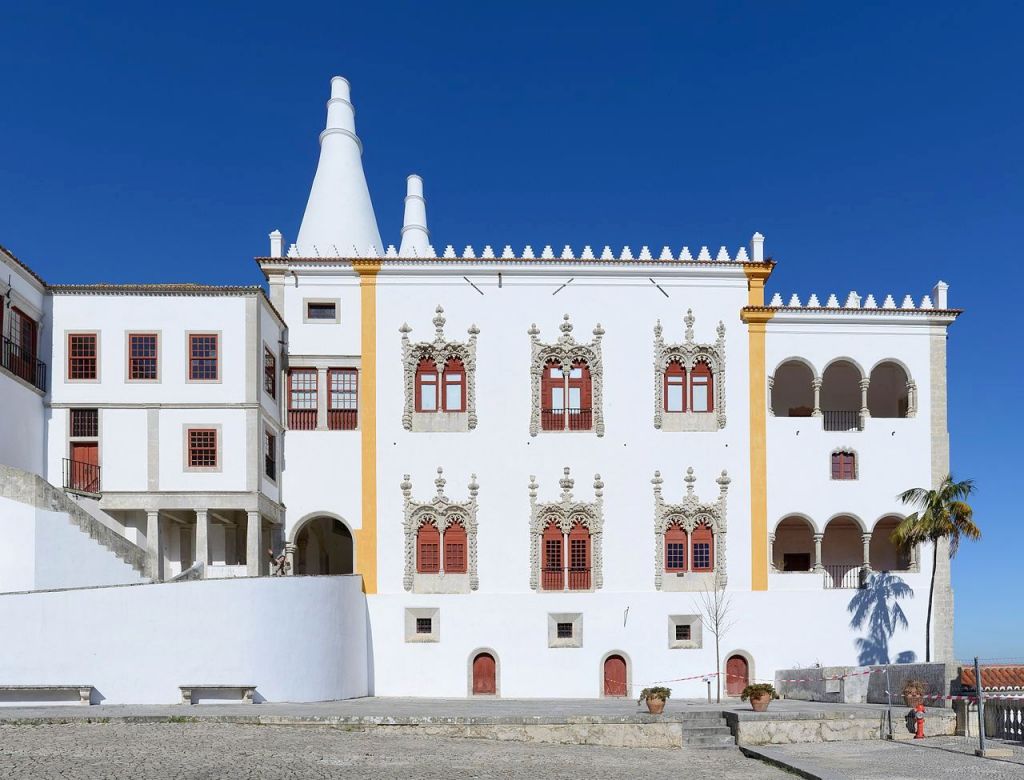 The most recognizable elements of the complex are huge conical chimneys situated on the royal kitchen building. These chimneys can often be seen on postcards and as souvenirs. They are one of Sintra’s calling cards. 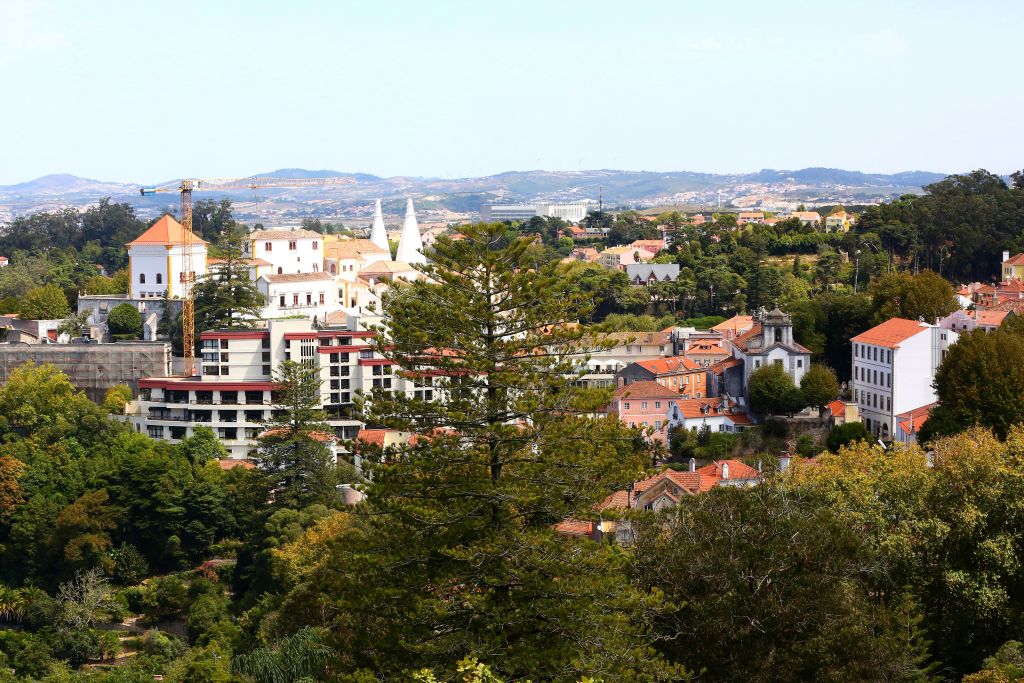 The palace doesn’t have a park, so its interior and exterior are the only things that attract tourists here. Inside the palace, there are several dozen rooms finished and furnished luxuriously in the royal way – frescoes on ceilings, azulejos, other mosaics, carved furniture. However, not all these elements have existed since the building was built. In 1755, it was severely damaged by the earthquake, just like the most part of Lisbon. Thus, the interior decorations had to be restored, while the furniture had to be supplemented with items from other palaces and museums.

The Palace of Sintra is currently a house museum and a UNESCO World Heritage Site.

Quinta da Regaleira is another estate in the suburbs of Sintra. It’s not just one building but a whole palace complex with lots of gardens, among which a castle rises.

The Regaleira Palace used to be snow-white, but got darker with time. However, the greyish shade only makes it more stupendous against a background of green gardens. The architectural style is very interesting. It’s a mix of styles – Gothic, Roman, Manueline – which is characteristic of many Portuguese castles. In other words, Portuguese neo-Gothic. 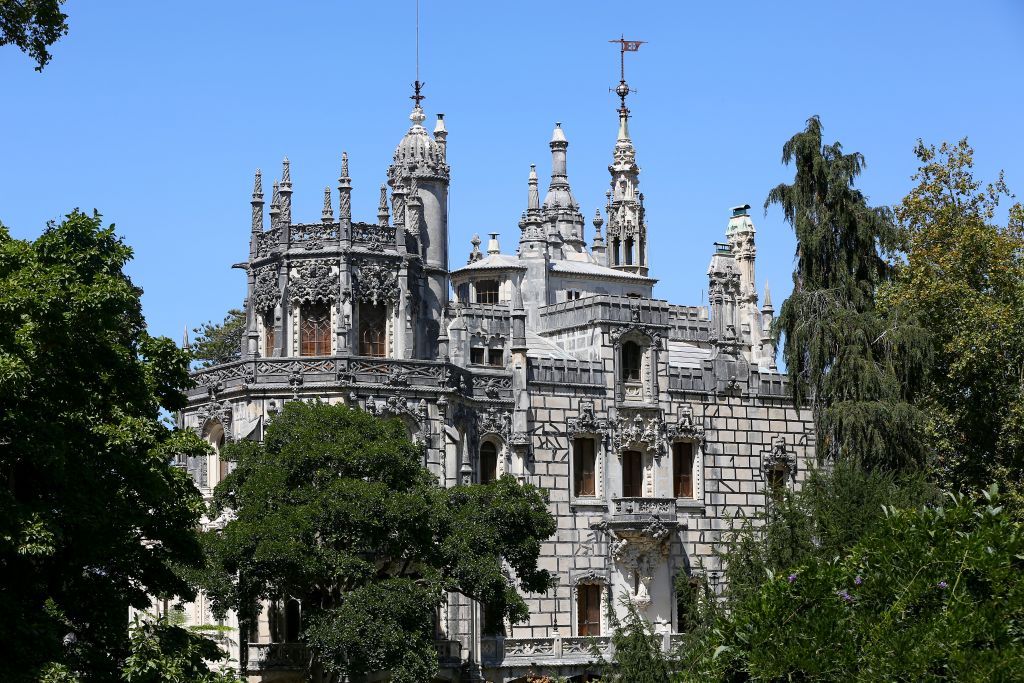 The palace facade is a rich (sometimes even overabundant) assortment of turrets, sculptures, stucco decorations, capitals, and other sophisticated architectural elements.

Apart from the rooms that are common for such constructions, the Regaleira castle used to have an alchemy laboratory that, unfortunately, wasn’t preserved. The room can’t be accessed by tourists. 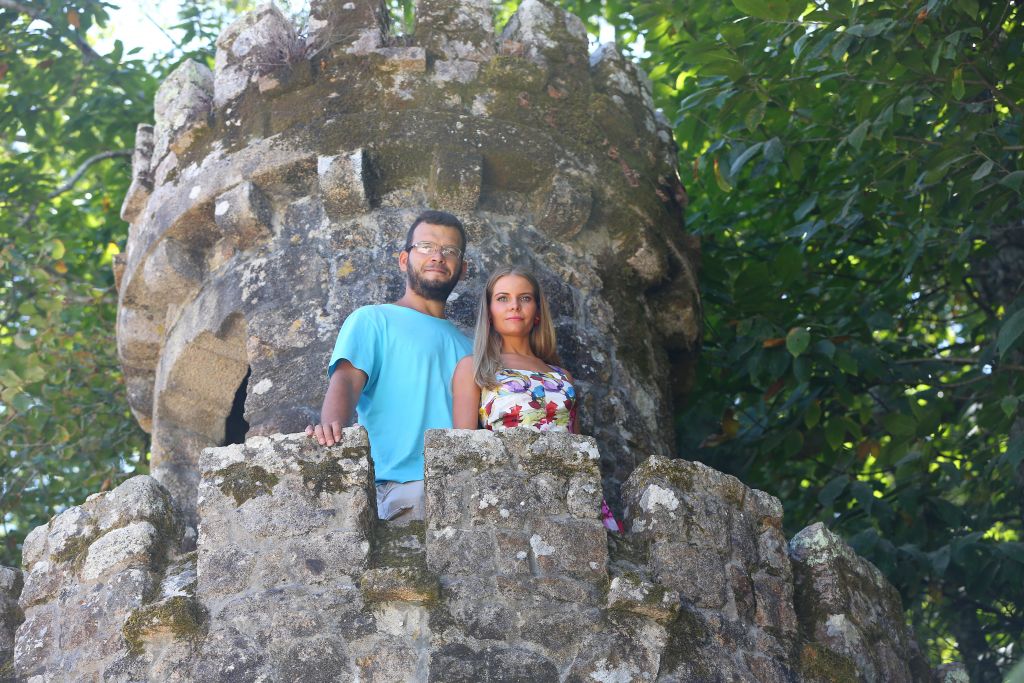 Quinta da Regaleira is a relatively young landmark – it dates back to the 17th century, and the palace itself was erected in the early 20th century. Despite the “young age”, it’s considered the most mysterious estate of Sintra. One of the last private owners of the villa was a member of the Masonic lodge. He wanted to change the interior of his property so that it would reflect his philosophy as fully as possible. So there are a great number of implicit and explicit signs referring to secret societies such as the Knights Templar and the Masons. 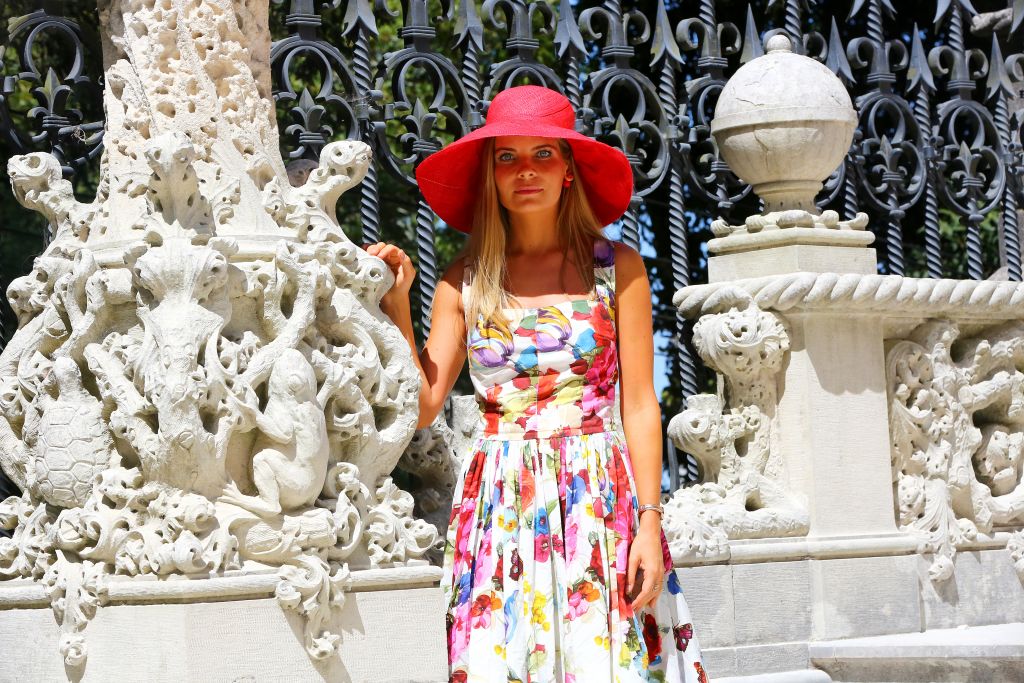 A curious feature of the complex is a net of underground passages connecting opposite ends of the area. For instance, there’s a chapel with a secret underground entrance.

The most famous, mysterious, and bright symbol of Quinta da Regaleira is the Initiation Wells. It’s a spiral inverted tower going deep down underground and having nine levels connected by a winding staircase. 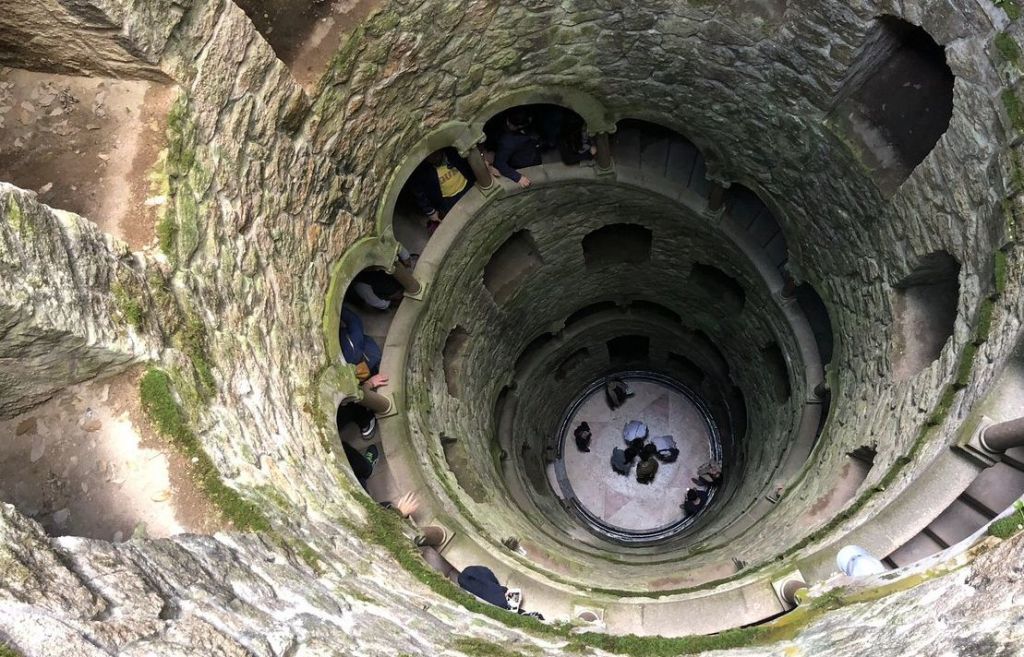 Each level symbolizes another circle of hell according to Dante Alighieri’s philosophy. They say that a rite of initiation into Masons was allegedly performed there (but there’s no evidence for that). 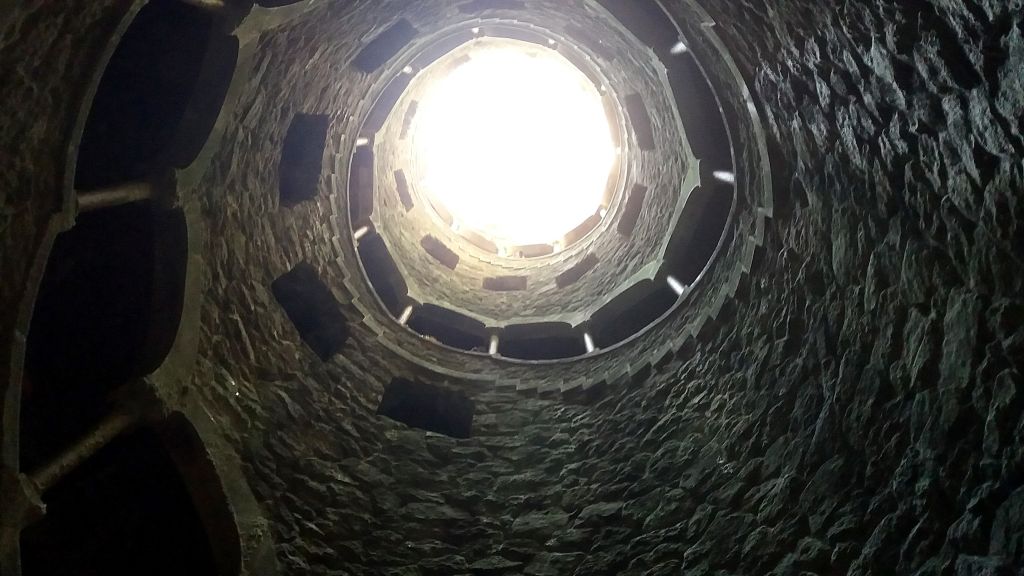 The Pena Palace is a magnificent construction surrounded by a huge park. It’s so magnificent that even the entrance gate to the palace complex resembles a grand triumphal arch 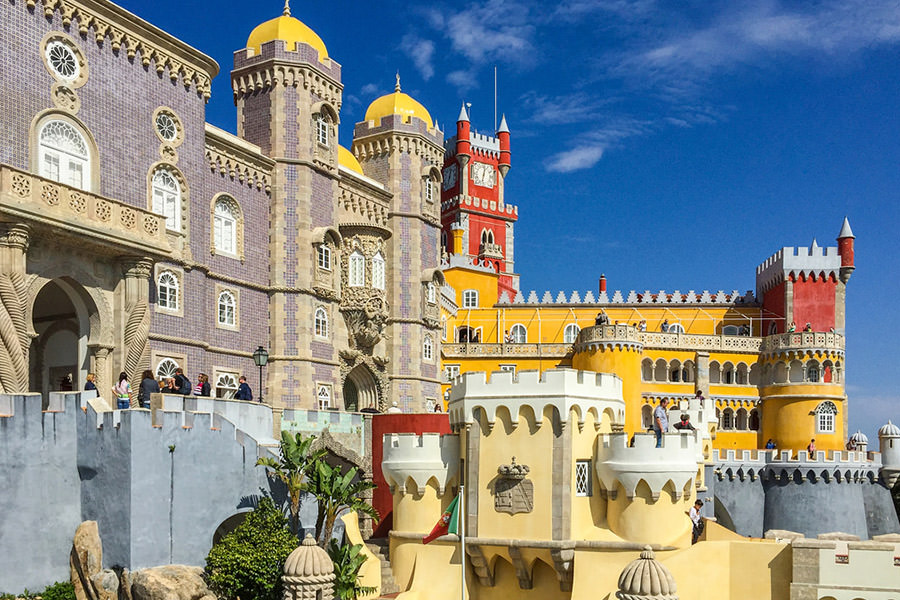 The spectacular castle was built in the 19th century using, by Portuguese tradition, several styles typical of Portuguese constructions of that time. The main building of the palace is made of grey stone. The façade is decorated with lacy stucco. One of the most bizarre and at the same time most remarkable decorations is a huge bearded triton located under the central balcony. 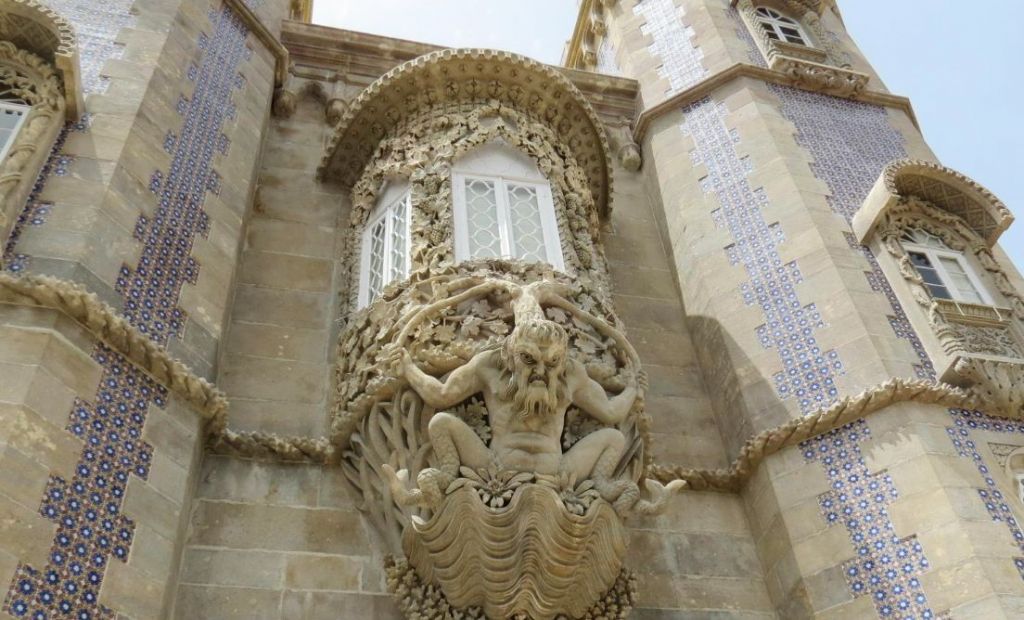 Other parts of the palace (a former convent, side towers) are painted in bright colours – yellow and red – which makes the neo-Gothic architectural complex somewhat gaudily festive.

Many think that the interior of the palace is much less impressive than its exterior. It’s not easy to get inside, though, as there are always crowds of tourists yearning to look at this wonder of the world. To admire the royal halls and rooms, you need to come very early in the morning to join a queue. When you get inside, the queue is not over. The whole tour around the palace is one big queue. Besides, the complex is situated on a hill, so before spending a couple of hours in a noisy crowd of slowly moving people, you have to climb uphill on foot. 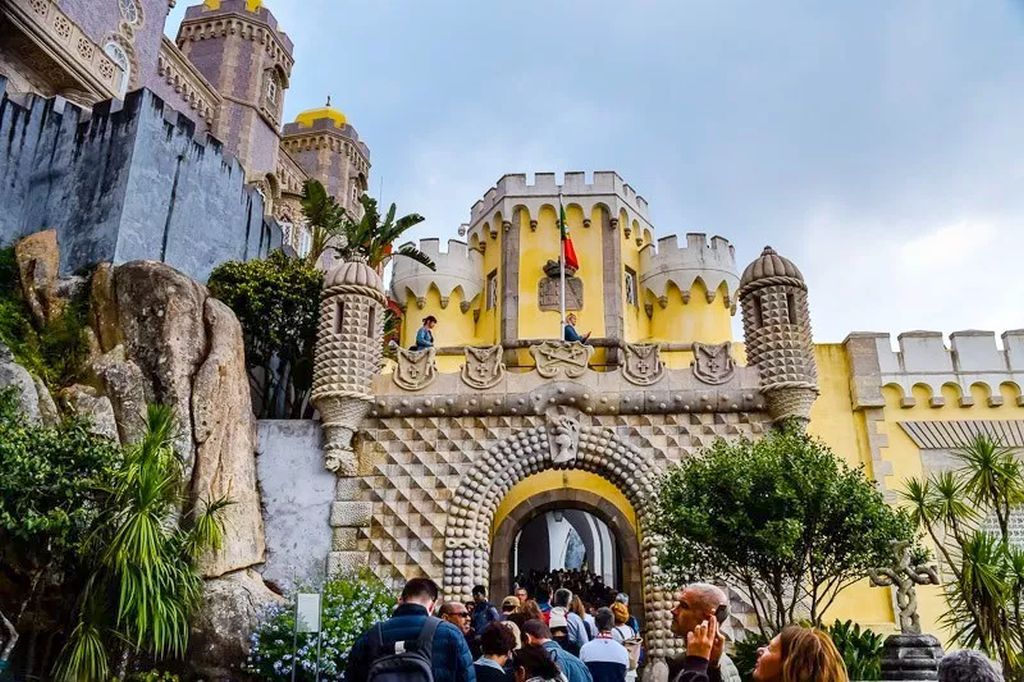 The park surrounding the Pena Palace is about 250 hectares and is actually a botanical garden. The territory of the park is so huge that it’s unlikely you’ll be able to walk everywhere in one day. And if you start with a tour around the palace, you will probably be too tired to walk long around the park. However, when we were approaching the palace, the boys fell asleep, so we decided to dedicate the time to a calm peaceful walk around the park instead of standing in a queue.

The royal park is arranged as a large romantic garden. There are lots of groves, lanes, stairs, pavilions, orangeries, benches. There are also fountains and ponds with fish and swans, small gardens with exotic plants, gazebos, labyrinths, and other unique objects worthy of a royal park. 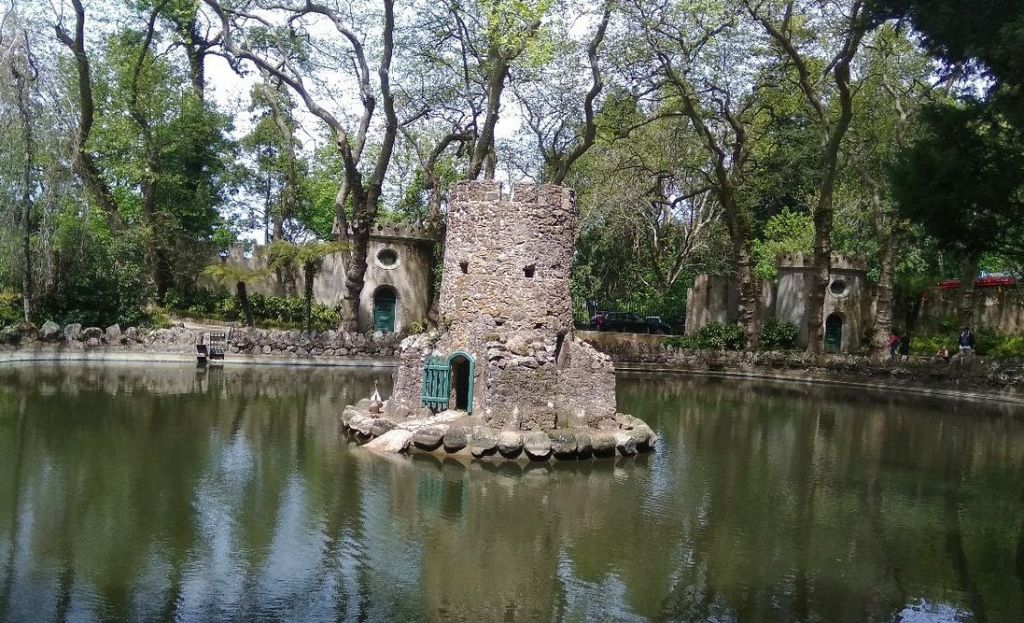 There’s an observation point having a large cross and offering stunning views of the park and the palace.

Castle of the Moors

The Castle of the Moors (Castelo dos Mouros) situated within walking distance of the Pena Palace is another historic landmark of Sintra. Those are the remnants of a once powerful castle. In fact, there are only walls and stairs left from the castle. 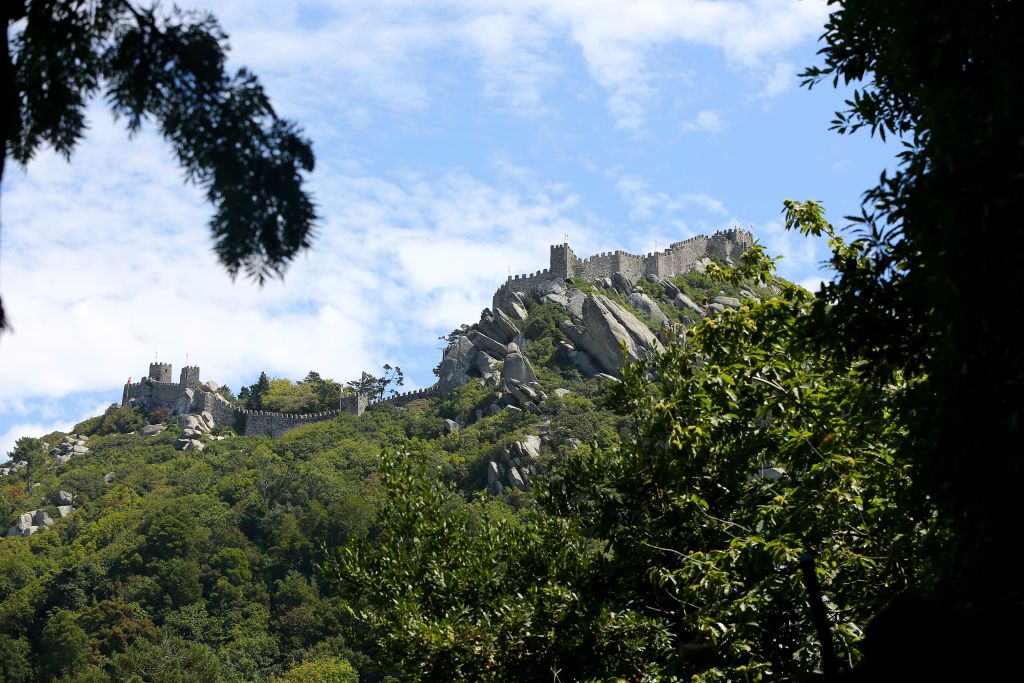 Castelo dos Mouros is located on top of a hill. Besides being incredibly picturesque and majestic itself, the construction has a beautiful view of the city and the ocean. Entry costs 8 euros and is definitely worth it. 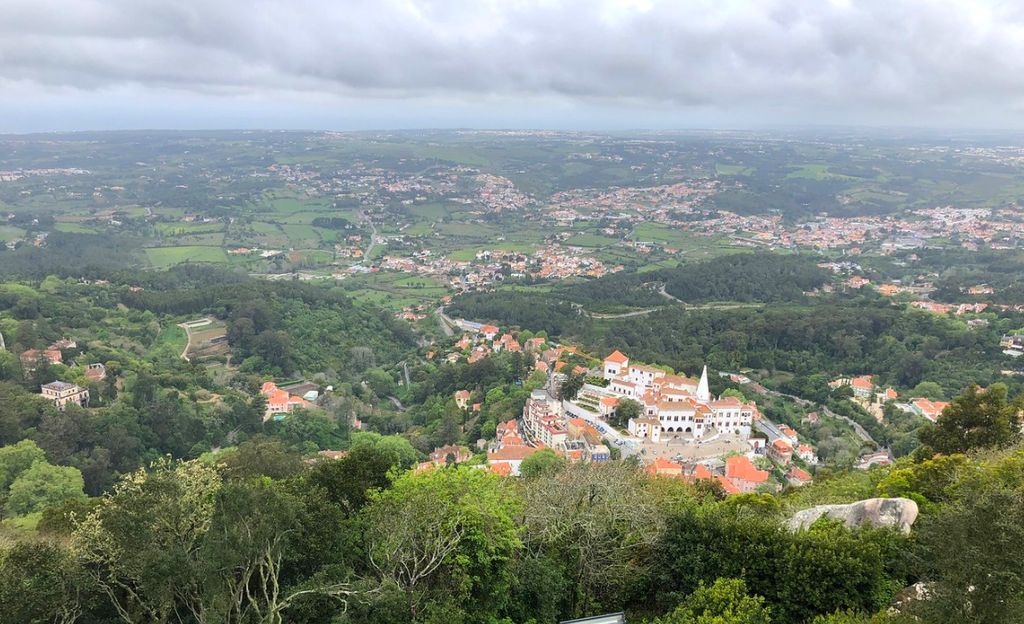 Convent of the Capuchos

The ancient Catholic convent hidden in the mountain forests is a place that contrasts sharply with the splendour of stupendous palaces that Sintra is famous for. The convent was founded in 1560 by order of King John III. It’s a complex of several buildings, each of which can without a doubt be called a symbol of asceticism. As a matter of fact, the whole Capuchin Order followed a strict charter instructing them to strive for poverty and abstinence from indulgence. The first fraternity consisted of eight monks who lived and prayed in peace and seclusion here. Moreover, they were engaged in social activities. They treated the sick with their own infusions from herbs grown on the territory of the convent, gave shelter to wayfarers, and accepted people who sought belief and spiritual calm. 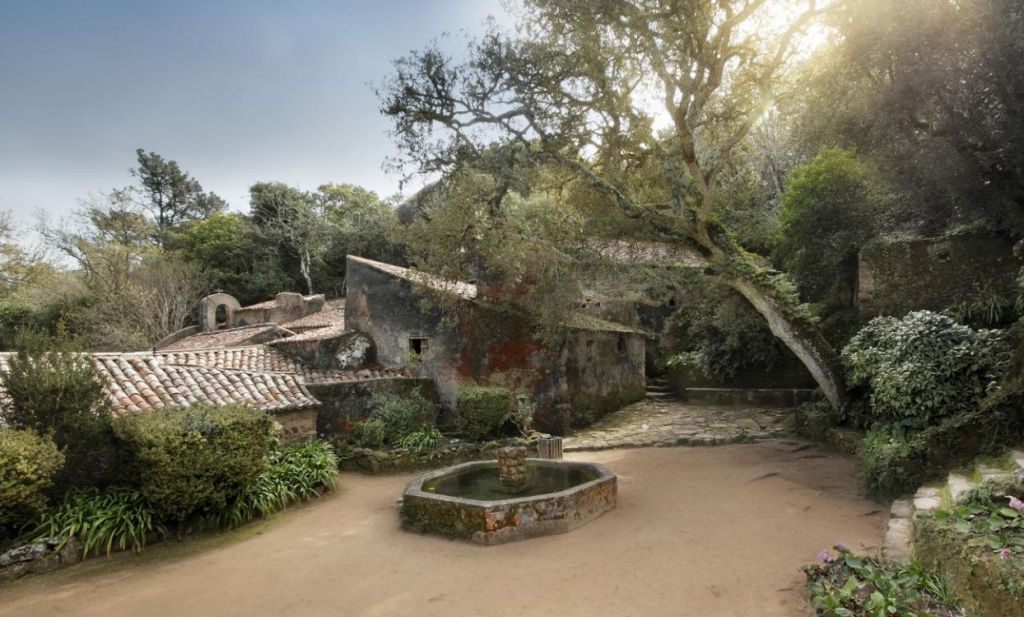 Almost all rooms in the convent are pokey, damp, dark and have small windows. The cells are miniature. Most walls and ceilings are finished with cork oak bark. This finish must have been chosen not only because of the abundance of cork oaks in the nearby forests (as well as in the whole country), but also to protect the monks living here from the humidity of a subtropical forest. Furthermore, a cork oak has soundproofing properties, which intensifies a feeling of seclusion and exclusion from the outer world.

Juicy greens, huge boulders covered in moss, half-destroyed ancient constructions… This unique place mesmerizes you and sticks in your memory due to its mystique and serenity.