Close to the two previous locations, there is the Gellért Hill. Its height is only 235 meters, and one can climb up it from any point – the paths running to the top are all around the hill.

Legend has it that the hill was named after a Catholic saint who preached Christianity. During the 11th-century revolt, the pagans put him in a barrel with nails and kicked him down the hill. 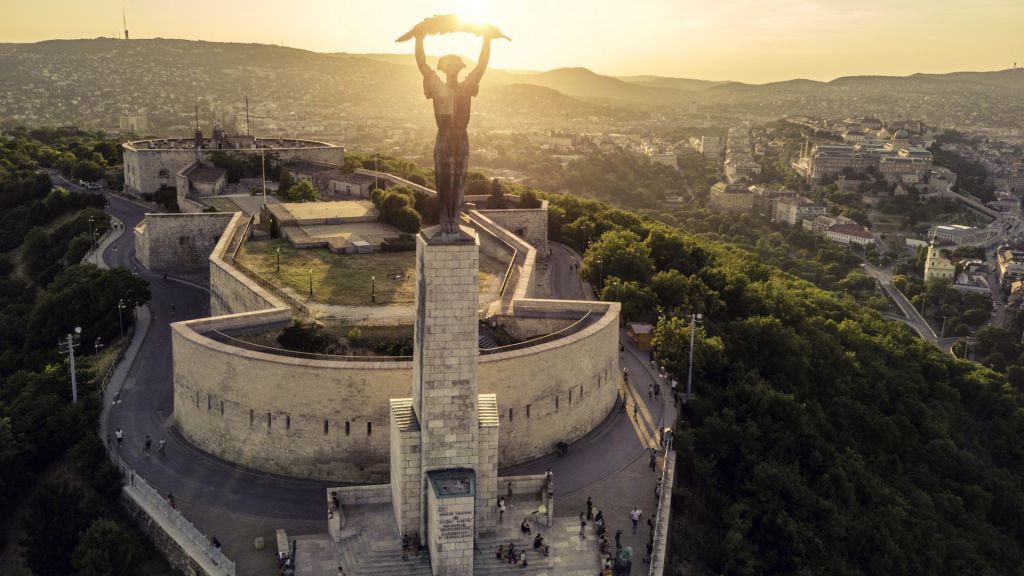 Today this place is particularly favored by tourists, and we could hardly believe that, up to the 18th century, vineyards and pastures were all that was located here.

In the 19th century, the Hungarians built the Citadella on the top of Gellért Hill. The location that they chose for this strong structure had its own purpose – it was the perfect place to observe and shell Buda and Pest. The length of the entire construction is 220 meters, and its height reaches 15 meters.

We saw chips and potholes on the walls in many places; they appeared here during the Second World War. At that time, the Soviet troops decided to seize the Citadella, which belonged then to German forces, by assault – they covertly came to the building at night and, after a long battle, destroyed the enemies. 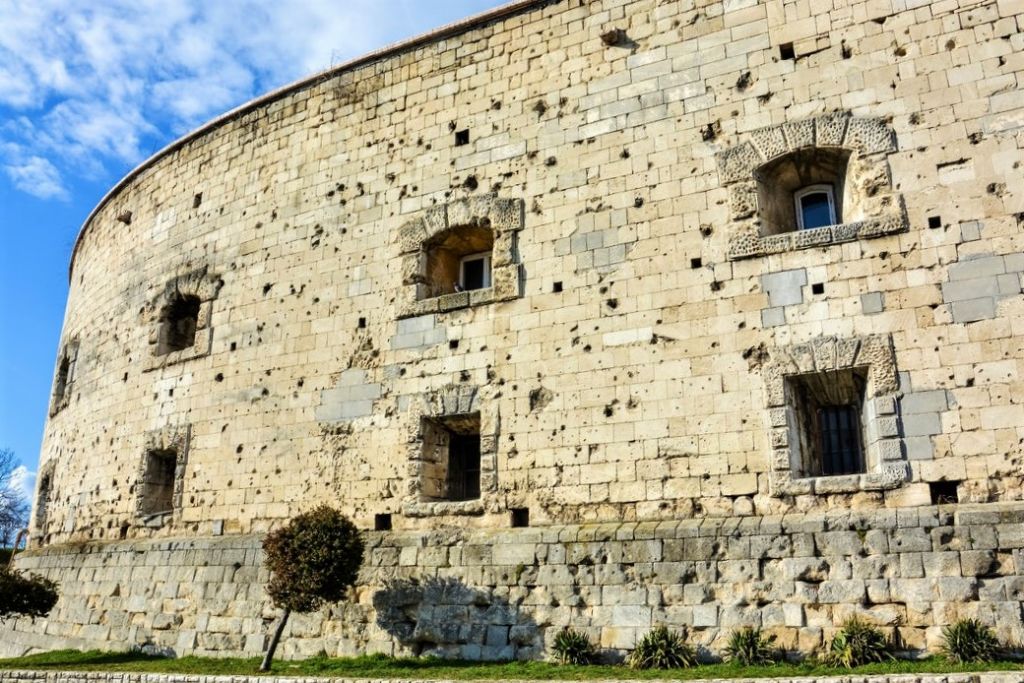 As a tribute to this event, the Hungarians erected the 40-meter-long Liberty Statue near the Citadella – it is a woman holding a palm branch above her head. 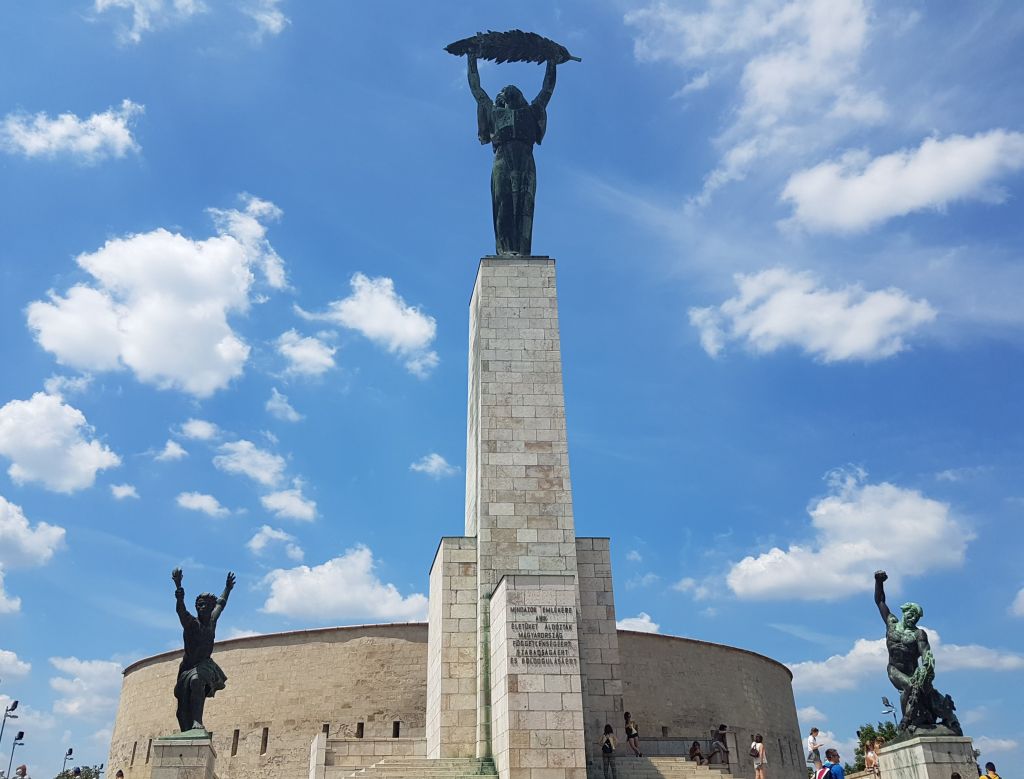 This sculpture is seen from many locations in the city and initially showed gratitude to the Soviet troops. Nowadays, the statue is dedicated to all those who were killed in action for Hungarian independence.

The northwestern foot of the hill has a beautiful and calm place called the Garden of Philosophy. It is a small area with eight bronze sculptures. Five of them, placed around the miniature Earth, are the founders of the five world religions: Buddha, Akhenaten, Jesus Christ, Abraham, and Lao Tzu. Three other sculptures (Bodhidharma, Mahatma Gandhi, and Francis of Assisi) stand outside the circle. 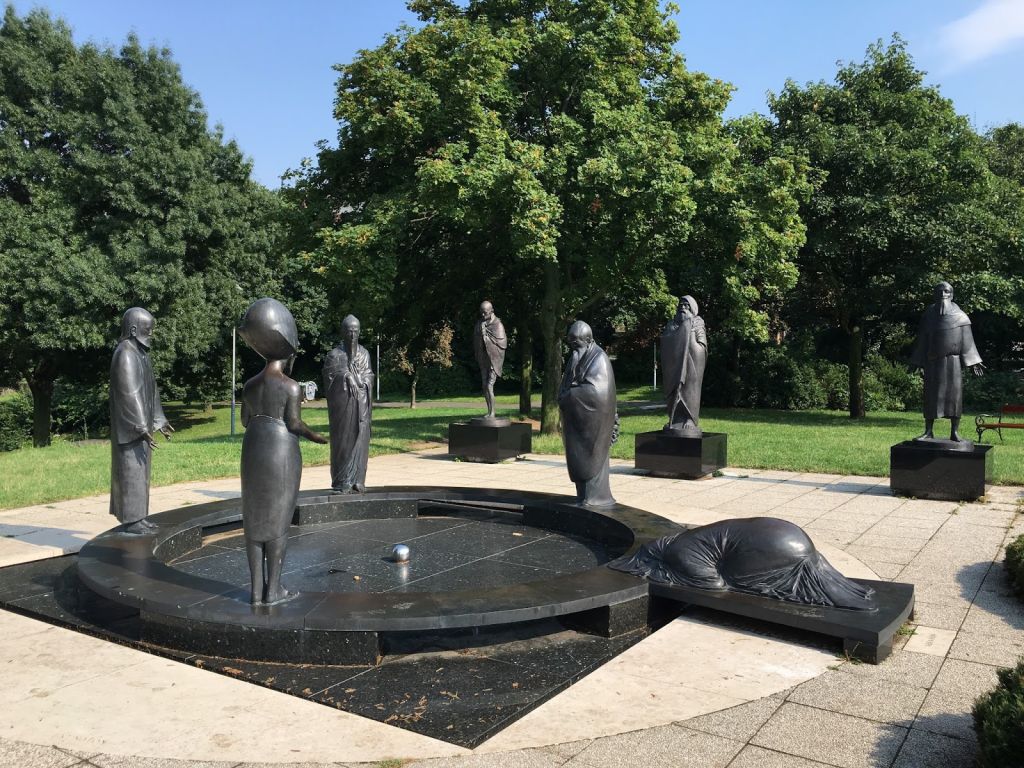 200 meters from the garden, there is a statue of King Buda and Queen Pest. Buda and Pest, standing over the “abyss”, the Danube, hold out their hands to each other. The buildings behind the Queen’s back are slightly inclined, but this is for a reason – the sculptor wanted to show that the Pest part lies lower than the part of Buda. 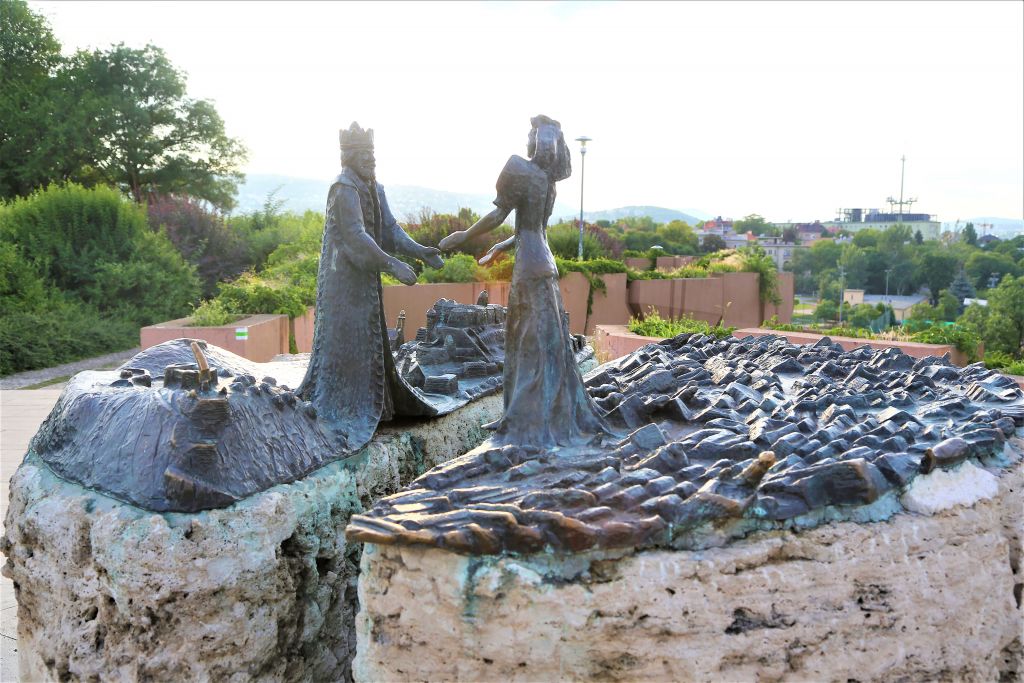 On the opposite side of the hill, we met the Cave Church. It belongs to the Pauline Fathers, the only monastic order from Hungary. 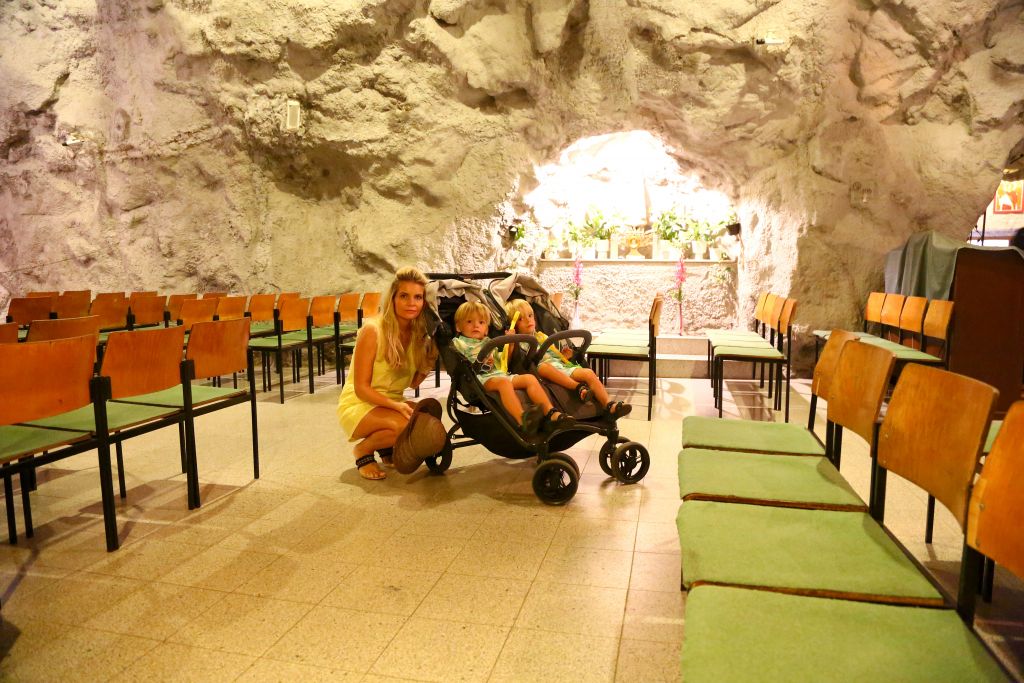 It is curious that, during the Second World War, the monks often sheltered refugees here dressing them up in monk clothing. After the war was ended, however, the church was completely closed and neglected until 1990. 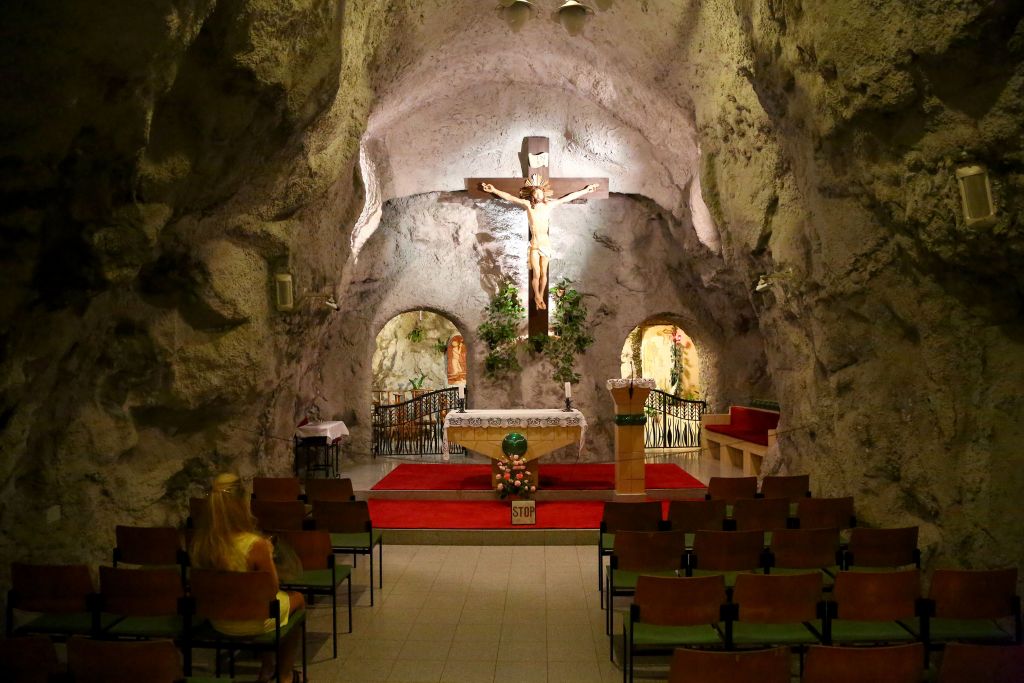 Robert and Michael also had fun in the hill area – there are two large playgrounds on the hill. One of them is a number of different slides – these are open, covered, flat, and steep slides. These are amusements that cater to every taste!

Another playground is designed in a very unusual style – almost all posts and crossbeams are shaped like colored pencils.

János Hill, located in the western part of Budapest, is the highest place in the city. Its height is as much as 528 meters.

The top of the hill is crowned with the Elizabeth Lookout of 23.5 meters high. 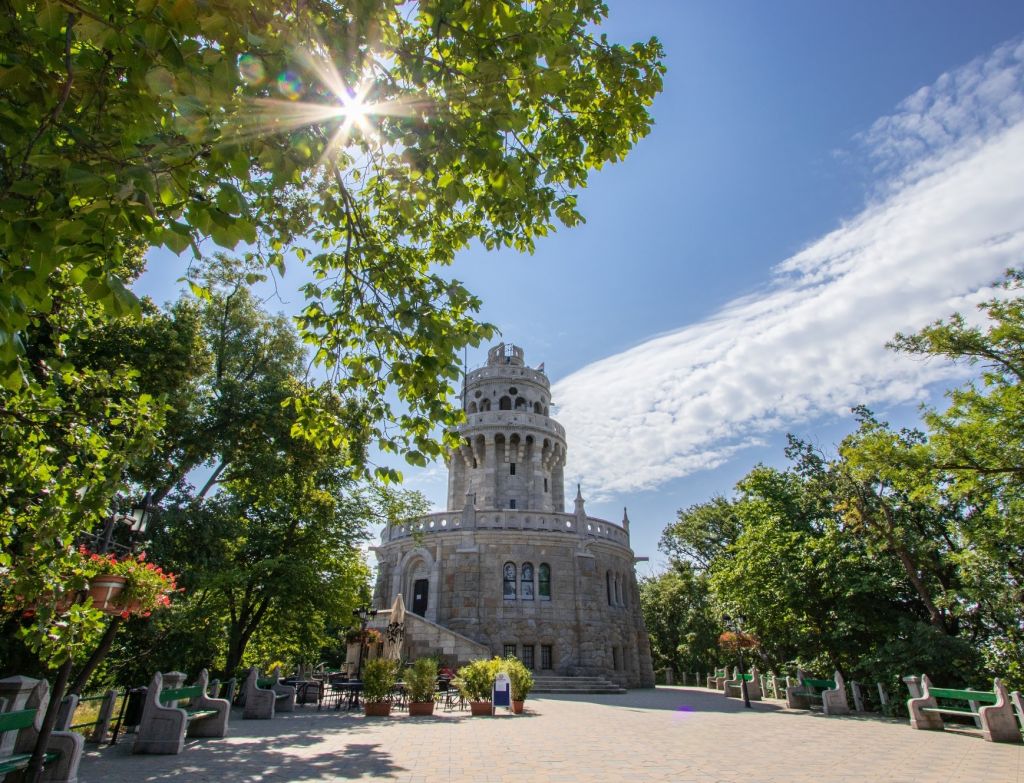 The structure attracts many tourists as its lookout opens picturesque panoramic views of the Hungarian capital and its suburbs in all their glory. 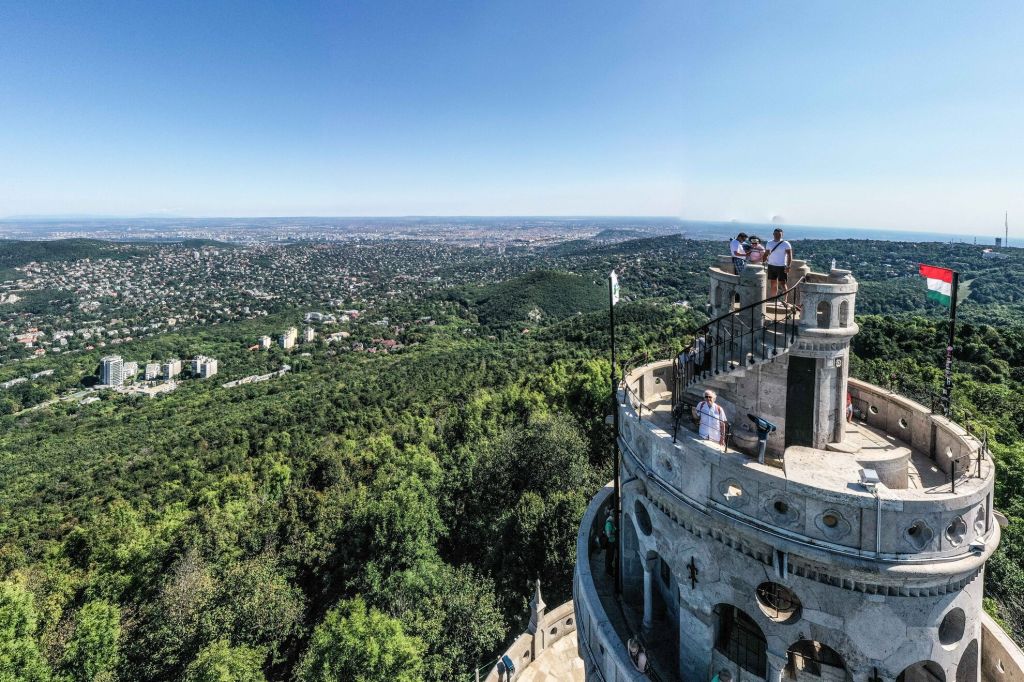 Until the 20th century, there was a small wooden platform instead of the tower. Majestic views, however, constantly tempted travelers; even Elizabeth of Bavaria took the chance to visit the hill. Therefore, at the beginning of the last century, the Hungarians erected the watchtower which later got the name of Empress.

Margaret Island is a 2.5-kilometer park located in the very heart of the city. This island is a real heaven for leisure: a lot of sights and sports grounds, places for creating artworks, hotels, cafes, swimming pools, and baths. 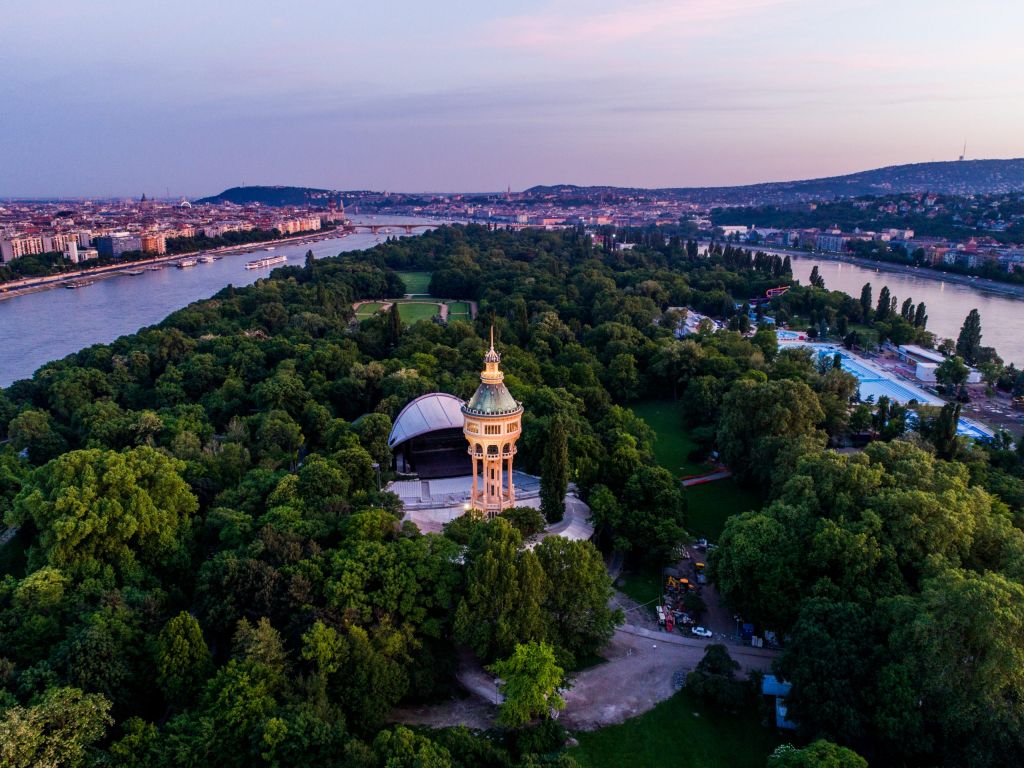 Initially, it was called the Island of Rabbits. The legend has it that, during the Mongol-Tatar invasion, King Bela IV promised God to send his daughter Margaret to the monastery if the enemy was defeated. God did what he asked, and the king lived up to his promises. Thus, the girl spent her whole life in a Dominican monastery on the Island of Rabbits, which was later renamed in her honor.

To this day, only ruins have survived from the monastery, but we still managed to find Margaret’s grave, adorned with various flowers, among them. 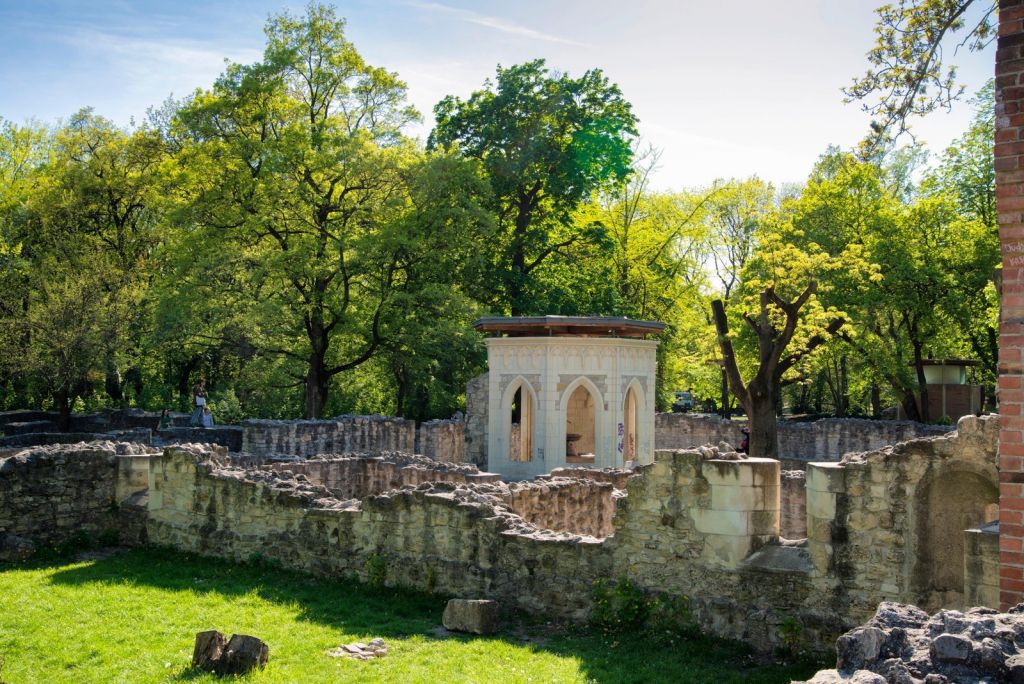 Next to the ruins, there is the St. Michael’s Church, but, unlike the monastery, it was renovated in the 20th century. Archaeologists found a valuable architectural item here – a bell that has survived since the 15th century. It was installed in the church and is still used up to now. 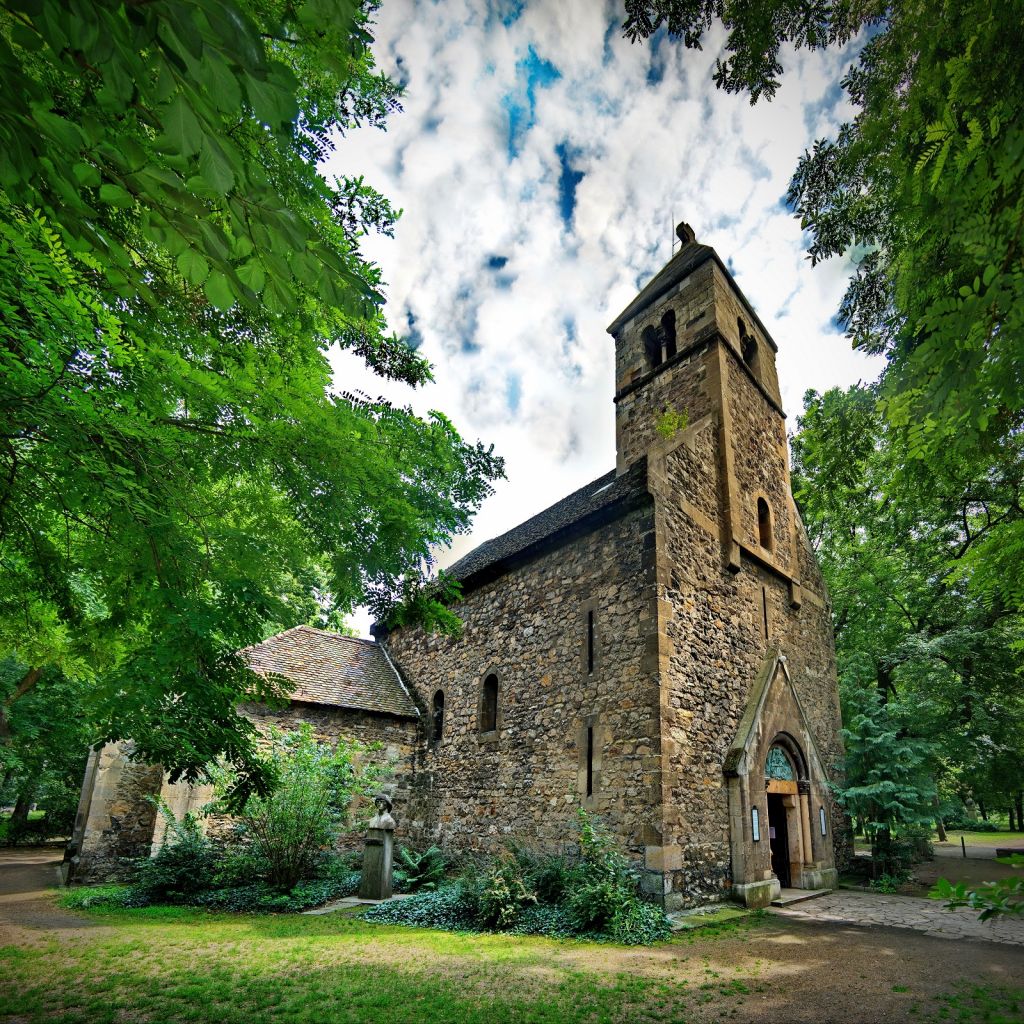 Another island’s sight is the art-nouveau Water Tower that proudly stands over the green oasis. It was previously used to serve the island with thermal water and was the only reinforced concrete structure in the country.

But the island’s main highlight is the musical fountain. Sometimes it turns out to be the only reason why tourists visit Margaret Island, so we also decided not to miss this chance.

Every evening in summer, about 200 fountain jets go to the air with music. It is mostly classical music by such composers as Mozart, Strauss, or Vivaldi. But sometimes people can contemplate fountain “dancing” to hits by such rock singers as the Beatles, Chuck Berry, or the Rolling Stones.

Another place of our visit was the Liberty Square. It evoked mixed feelings. On the one hand, today it is a beautiful and green place where Budapesters can relax from their busy urban life. On the other hand, its history is rather atrocious.