You can move around the city by bus or taxi. By the way, Uber is available here, but it has certain limitations. Several years ago, you were able to go to any part of Cancun using Uber. But city taxi drivers began to complain to the police. Uber drivers were literally caught and fined because they had no licence.

The company paid all fines for its employees, but when losses from fines became higher than profits, it was decided to divide the city. Hotelera is currently served by the local taxi company only, while Uber works in the non-tourist area, and it works really well — the cars arrive quickly, and the prices are low.

Another option is to travel by big city buses. They are cheap and circulate frequently. You can reach any part of the city (up to the 20th km of Zona Hotelera) for about a dollar. There’s only one problem: too many stops. Thus a trip takes too much time. 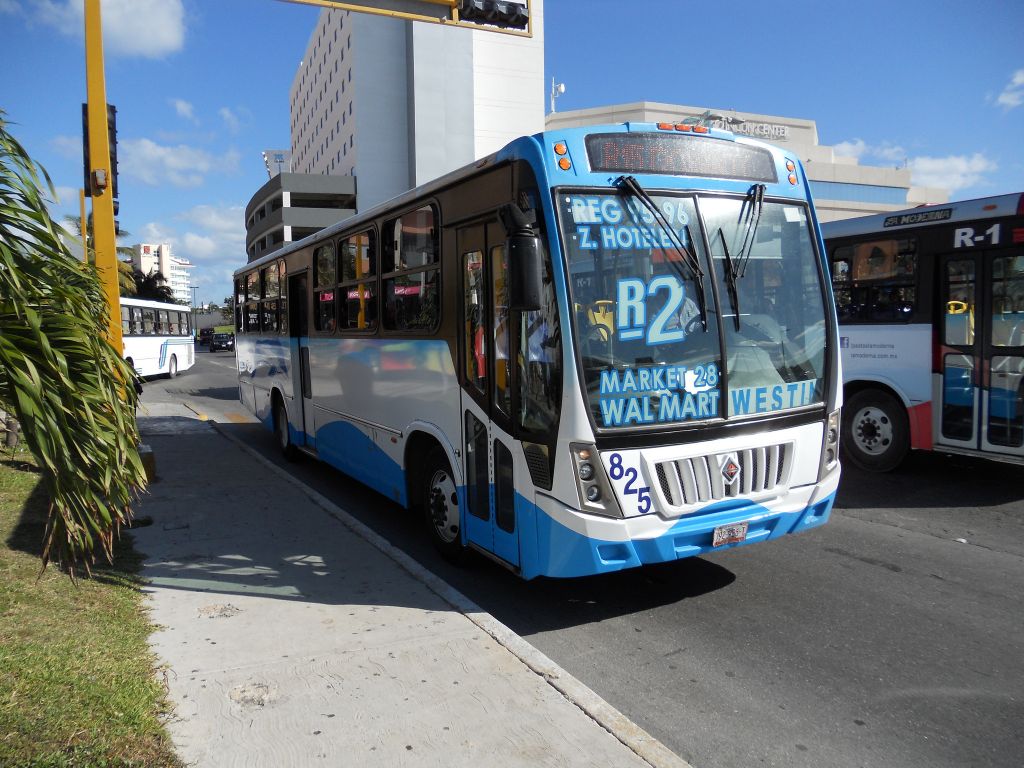 At first we intended to explore the city on foot, but it turned out to be a tough task. While European cities have everything handy, the distance between shops, beaches, landmarks is quite long in Cancun. The city was built during mass motorization, which is probably why the pedestrian infrastructure is rather poor here. For example, sometimes you need to go over a kilometre to reach the nearest pedestrian crossing. Local citizens cross the road almost everywhere. And we gradually got used to local road rules too. 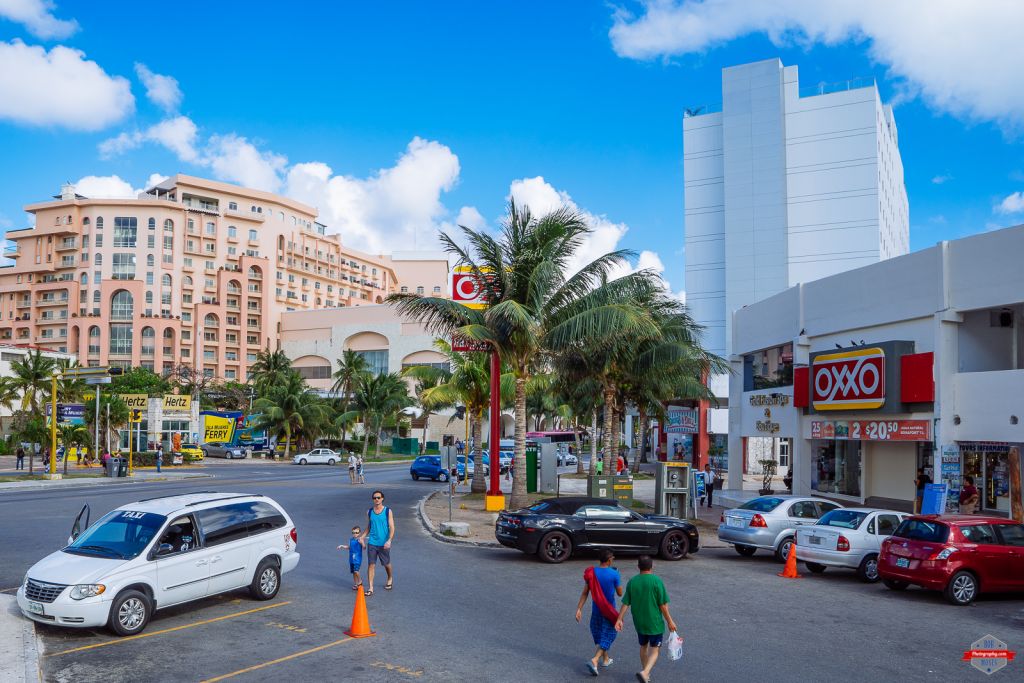 However, after spending a couple of days in the area, we realized that it was hard to live in the city without a car. We decided to rent a car, and it made our life so much easier as we could freely go to shopping malls, beaches and do sightseeing without using the services of travel companies.

Cancun beaches are just incredible. We were mesmerized by the soft snow-white sand and the crystal clear turquoise waters of the Caribbean Sea. We had never seen such beauty before. Each beach has its own name. For example, there are the Turtle Beach, the Snail Beach, etc. However, it’s much more convenient to use the number of a kilometre to get your bearings.

On the map you can see that the first four kilometres of the sandspit are fully protected from wind and currents thanks to the island of Isla Mujeres situated nearby. So these beaches are perfect for recreation with children.

The water is warm and has no waves here, though there’s seaweed. The farther along the sandspit you go, the more unquiet the sea gets. Since the boys liked playing in the sand more than swimming, we preferred to visit the beaches between the 8th and the 12th km. The water is very clean here, and the waves are not dangerous, though they can be fairly large. The beaches located farther away appeal to surfers. The high waves found here are ideal for surfing.

The sand is soft and thick on the beaches. We bought children’s spades and a big shovel at once, and when we came to the beach, we dug sort of a large pool where the boys could play for hours in a row.

It’s curious that despite the excellent weather the beaches were rarely crowded. Most tourists preferred to stay at the hotel relaxing by the pool.

The only problem we faced was access to the sea. The coastline is so densely built up with hotels that there are almost no passages. Most Cancun beaches are public by law, but you can get there only through the territory of some hotel. And most hotel security guards don’t let strangers aiming for the beach in. 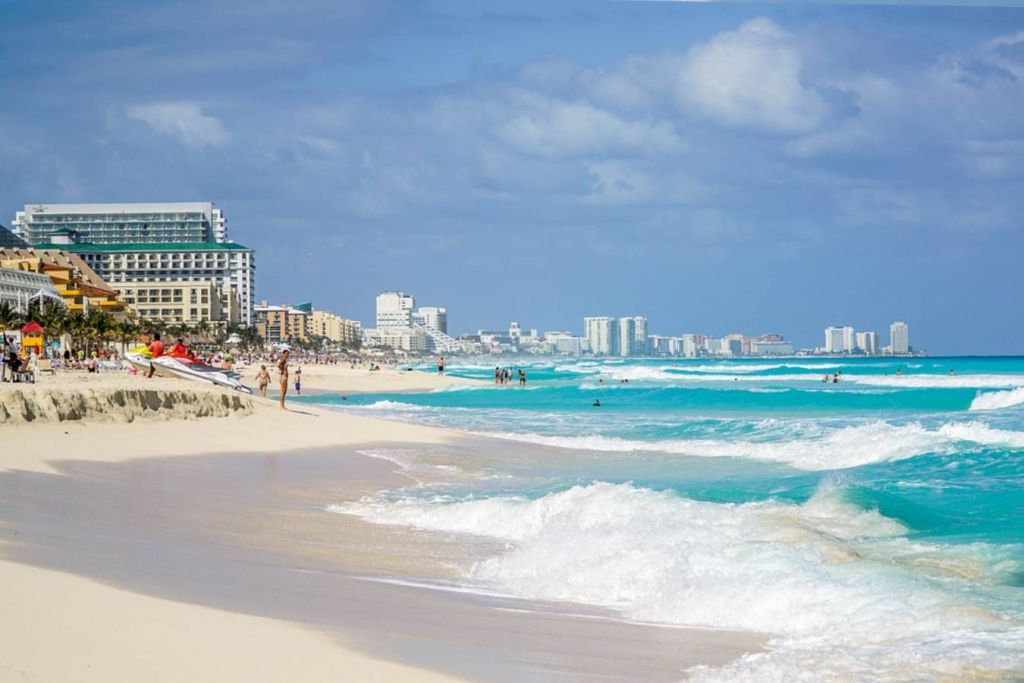 Strange but a large lake formed between the mainland and the sandspit after the construction of bridges is not used in any way. We saw someone driving a motor boat and a water scooter there a couple of times, but mostly no one takes an interest in the lake. 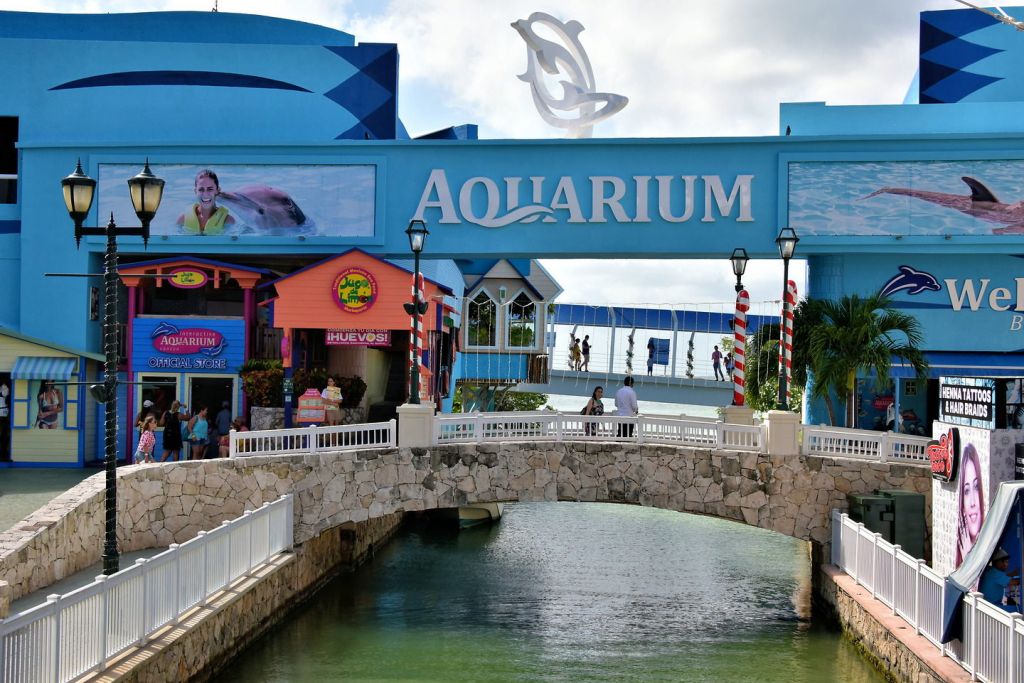 A visit to the oceanarium was a real adventure for our boys. It’s a well-arranged place in the centre of Hotelera.

We were delighted at the opportunity to have direct contact with the animals. Here, for the first time in their lives, Robert and Michael Jr touched a manta swimming in a special open pool, saw and touched a starfish.

The oceanarium also has dolphins that are the main characters of various fun shows organized here every day. 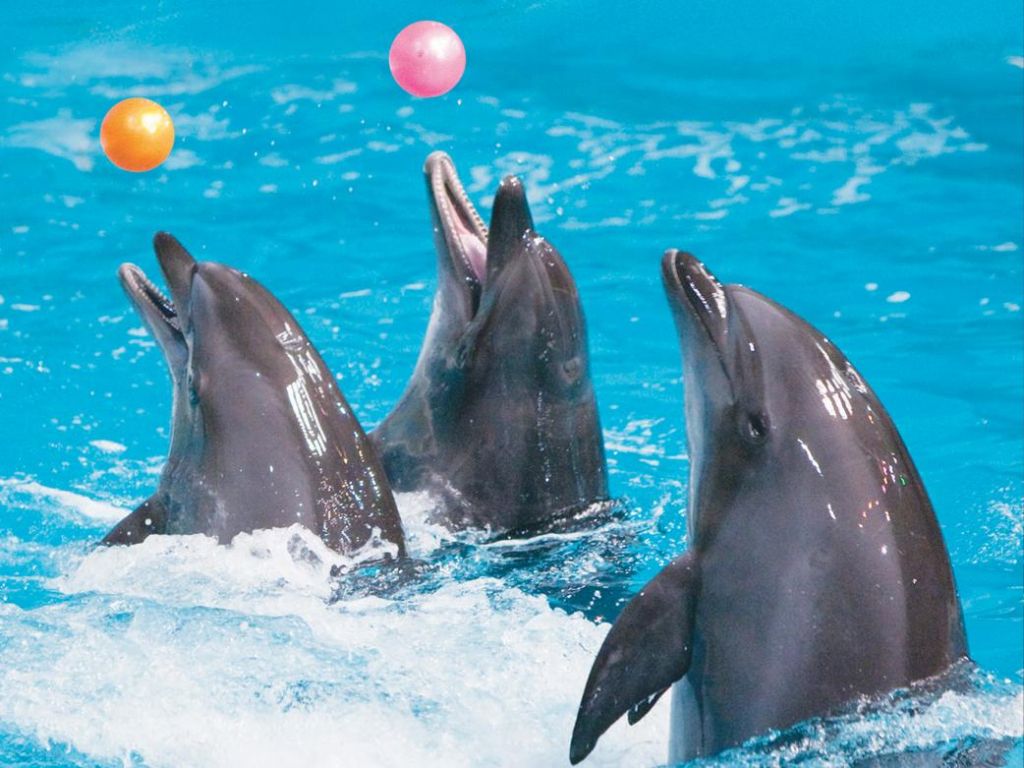 Cancun has a dolphinarium as well, where visitors can not only see a performance but also swim with dolphins in the pool (for a fee).

It’s forbidden to take photos here, though. You can buy photos and videos made by the on-site photographer, but a set of several shots and videos will cost about 200 dollars. 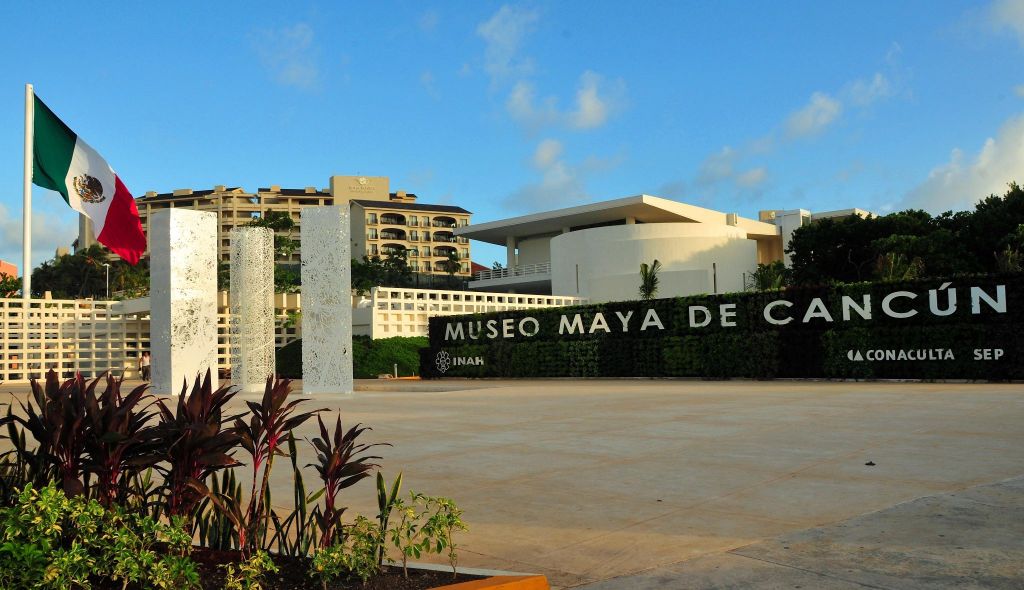 We had quite an informative visit to the Mayan Museum opened in November 2012, just several weeks before the “end of the world” predicted by the Maya. The government spent about 15 million dollars to build the museum and gather a collection, which is a huge amount of money for Mexico. 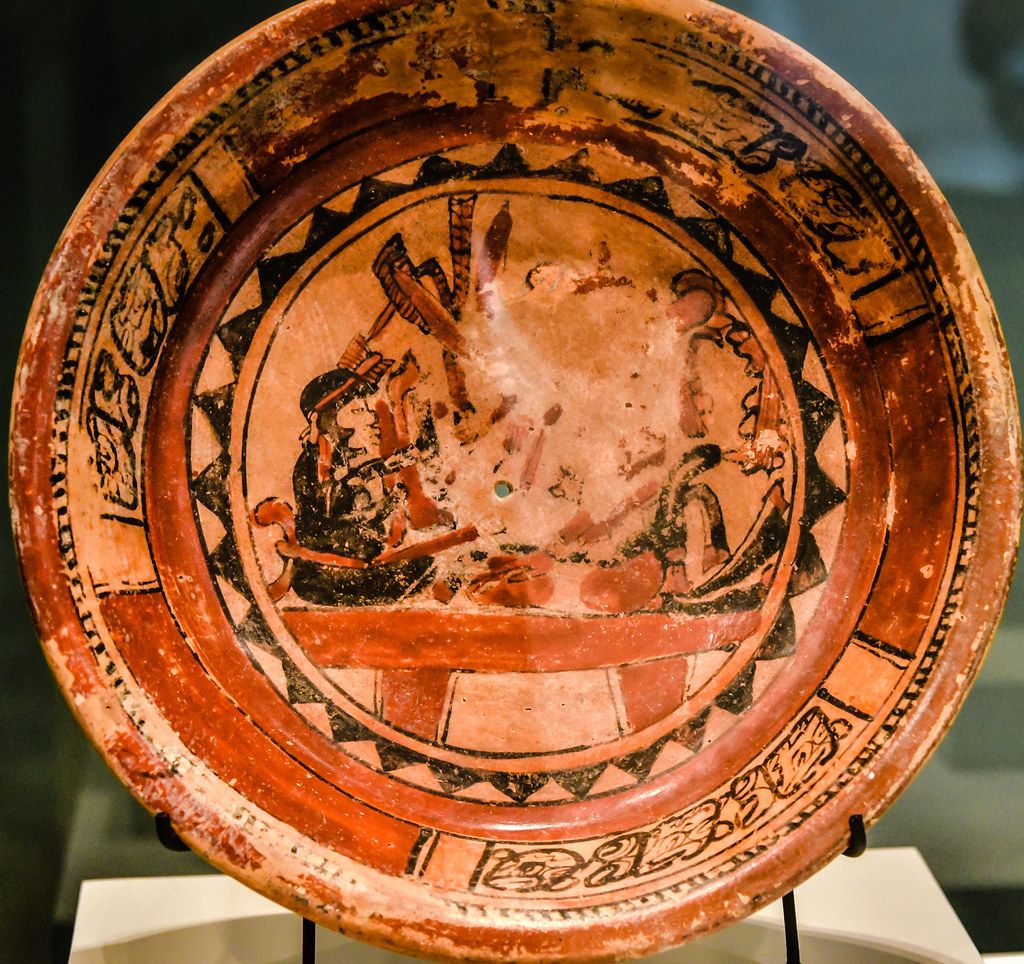 One of the most famous exhibits is a woman’s skeleton found in caves near Cancun in the early 2000s. According to researchers, the remains are at least 10,000 years old. There’s even a skeleton of a sabre-toothed tiger exhibited in the museum.

A part of the collection is exhibited in the open air. Here, in the middle of a tropical park inhabited by iguanas, archaeological excavation is still underway. The visitors have a chance to see the ruins of ancient Indian houses and temples, the walls of which still bear frescoes. 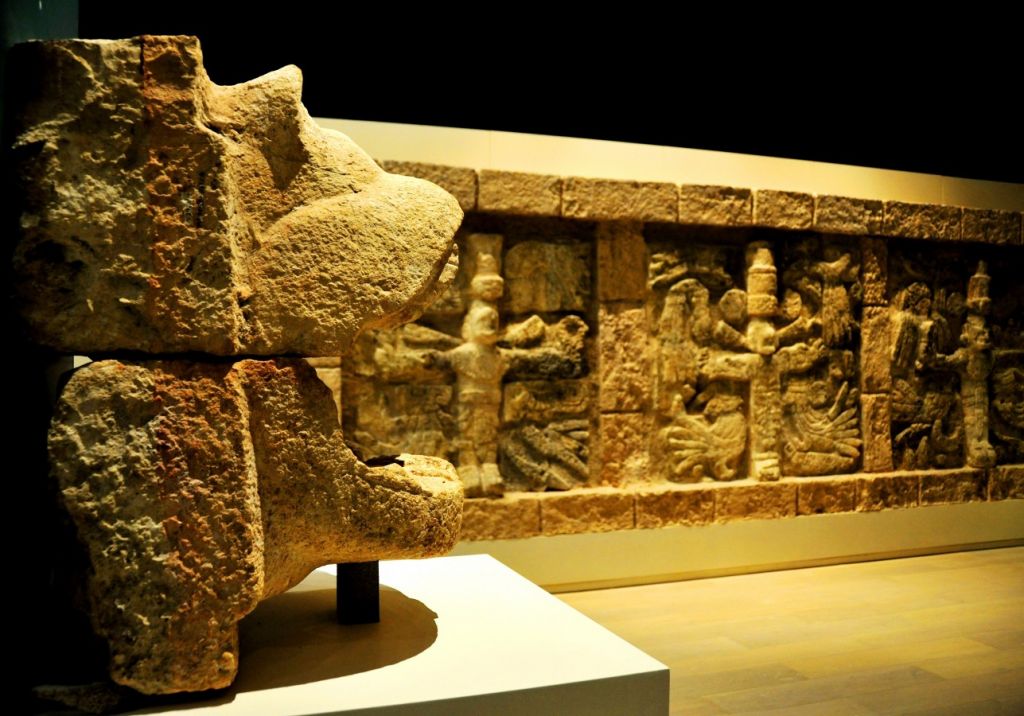 It was very interesting to look at the ancient items and learn more about the everyday life of the Maya and the Spanish conquest of the peninsula.

It’s no problem to find a place to eat in Cancun as there are lots of restaurants and cafes for every taste and budget. A dinner in the tourist area is, of course, pricier than in the central part of the city. But a higher price doesn’t necessarily mean tasty food or high-quality service.

As always, we studied tourist’s reviews and restaurant ratings on TripAdvisor and looked up the lists of top city restaurants on other websites.

As a rule, the restaurants in non-tourist areas are much better than those in the heart of the tourist hub. Here the owners can’t count on a never-ending stream of holidaymakers and are interested in regulars. So the food is both tastier and cheaper in such places. In our opinion, the best restaurant in the area is La Fonda del Zancudo. The tuna steak and tartare served here deserve the highest praise.

Many Cancun eateries are owned by foreigners. Such restaurants offer better service and food, and although the prices are a bit higher here than in Mexican restaurants, they are still not as exorbitant as in the tourist area. We liked Peter’s Restaurant managed by a family of Europeans. It’s calm and cosy here, the food is delicious, and guests are treated very warmly and cordially.

We can’t help mentioning street food that is also diverse, tasty, and cheap here. We used to spend time on the open playground — one of the few in the city — near the square called Parque de las Palapas. 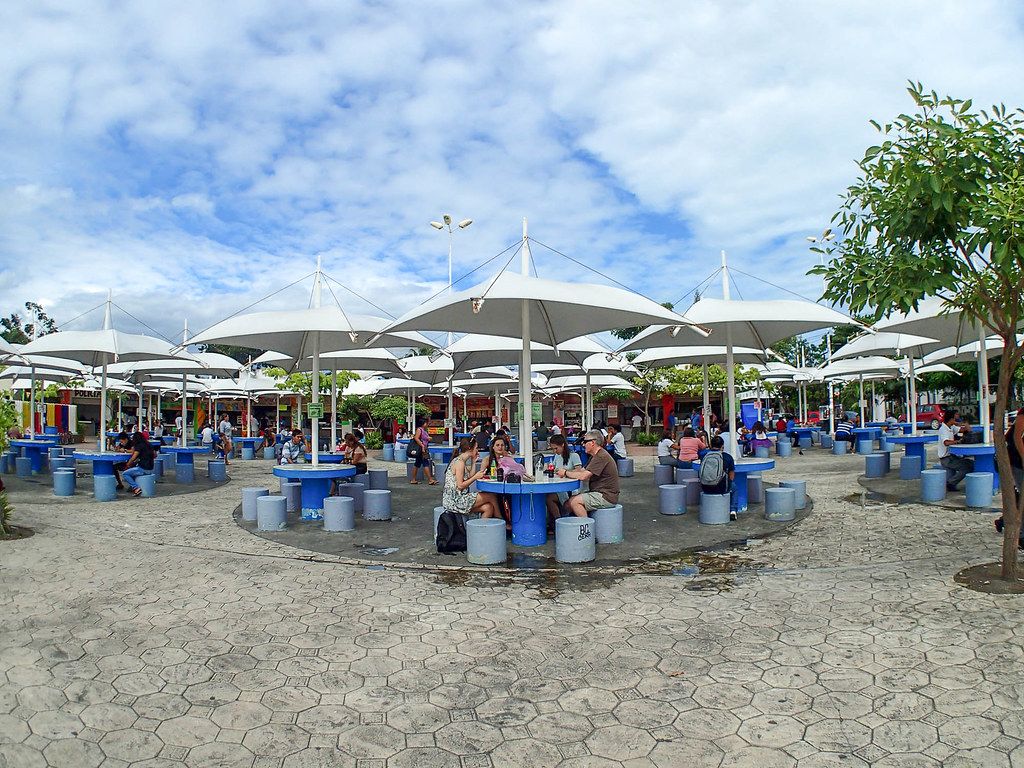 It’s a place in the middle of a Mexican quarter meant primarily for locals. We rarely met foreigners there, which, however, didn’t stop our boys from going on the swings and slides together with local kids.

The ground was surrounded by street food stalls. Three tacos could be bought for a dollar, and a big burrito cost about 1.5-2 dollars. The prices were ridiculously low from a tourist’s point of view. 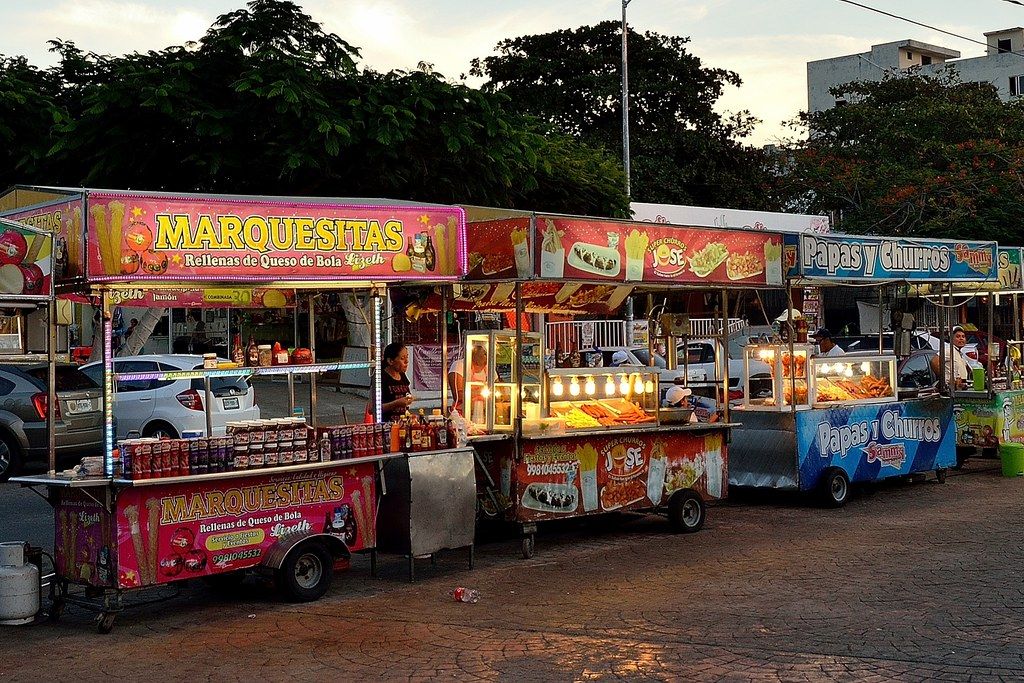 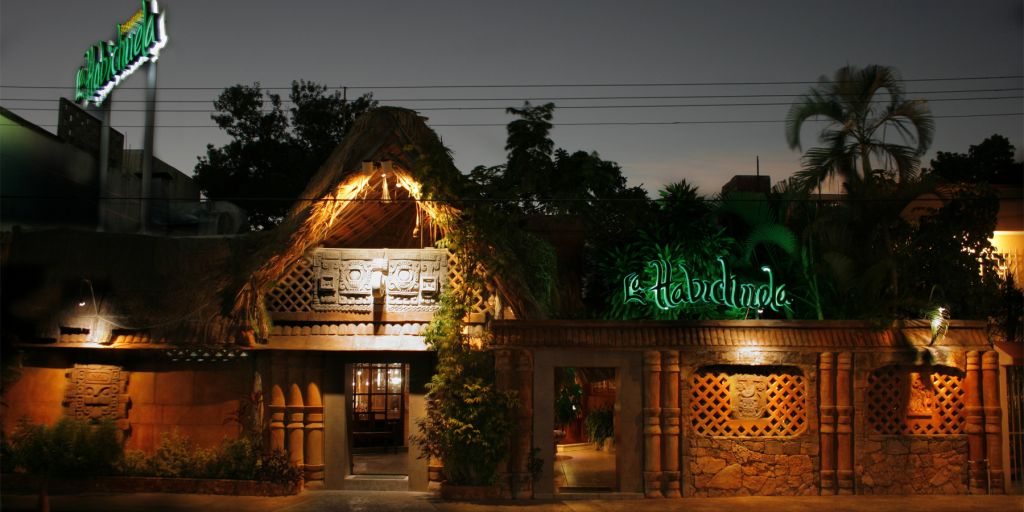 Groups of tourists are often brought to the restaurant, and the prices are three times higher here than on the neighbouring square. Of course, the level of service and dishes differs greatly as well.

As for Zona Hotelera, we found Cancun Lighthouse Restaurant to be a nice place with good cuisine, though it’s geared towards tourists.