Old Town is the main landmark of Lisbon. It’s a vast area that consists of several districts. It’s a very authentic, colourful, and historic place. Winding paved narrow streets, bright facades, most of which are decorated with a mosaic of ceramic tiles (azulejo), myriads of flower pots looking like gardens near the house doors and on the balconies.

Alfama is one of the districts constituting Old Town. It’s a historic place that breathes the spirit of old Lisbon. After the earthquake that destroyed the city, only these quarters managed to preserve the old atmosphere which the great Portuguese, who made their country known all around the world, once lived in – Vasco da Gama, Magellan, Great General Albuquerque. 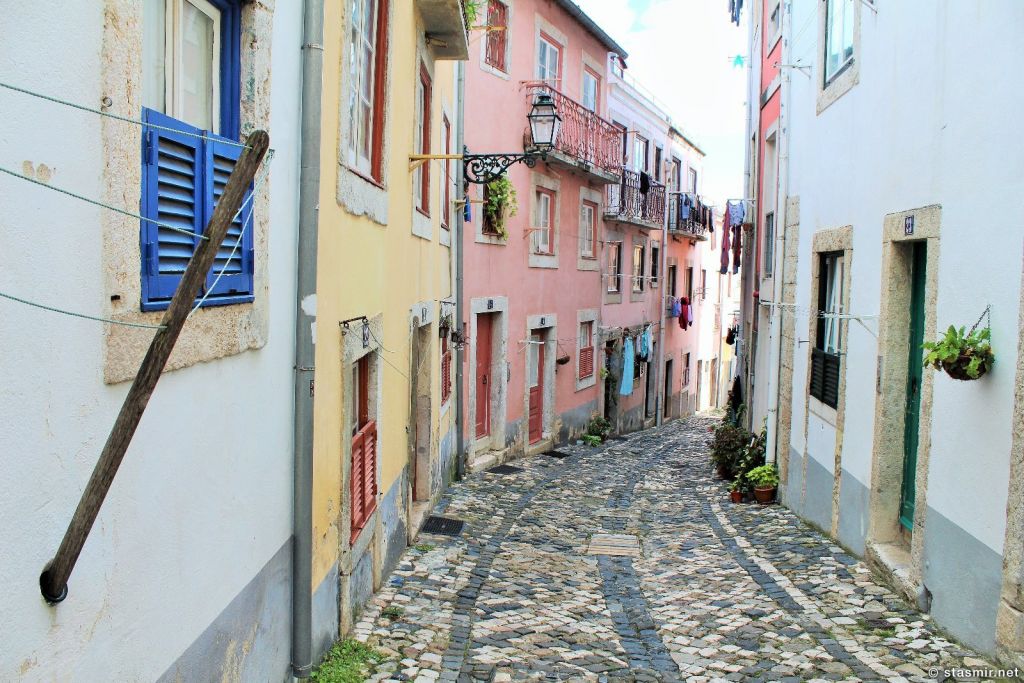 A distinctive feature of Alfama – as well as of other old central Lisbon districts – is its varied terrain. It’s incredibly interesting to walk here, but it’s also very tiring. Frequent steep rises and falls literally wear you out. That’s why many travellers recommend exploring the area from trams, which are a sort of Lisbon landmarks on their own. These vintage trams slowly move along the old streets somehow managing to fit in frequent and very narrow turns. 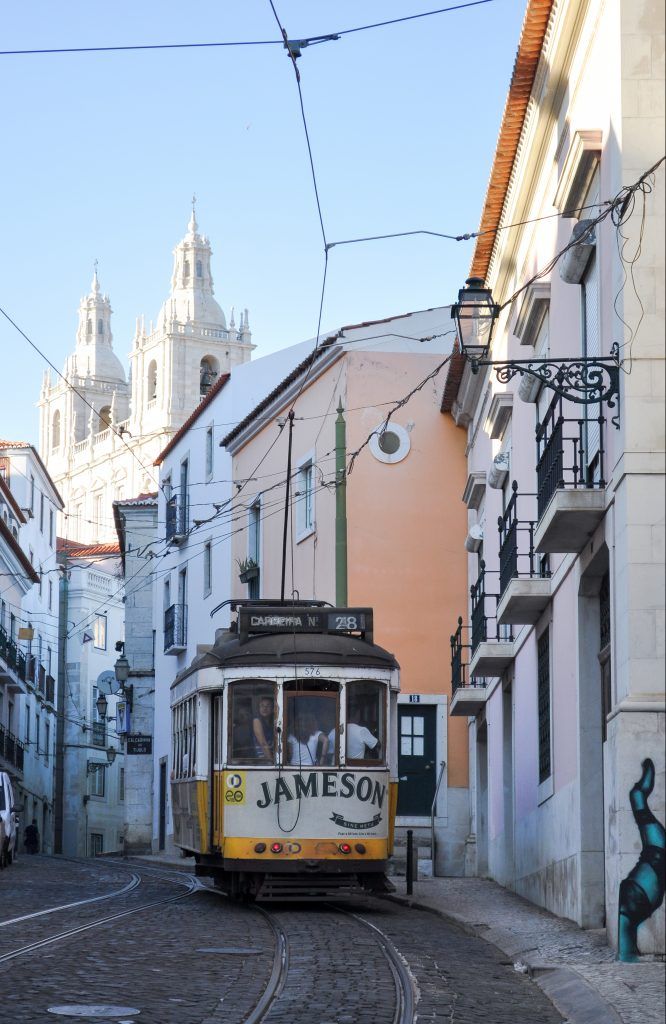 We were able to enjoy a tram tour only once. Unfortunately, old trams are not equipped with platform lifts and have a very narrow entrance. So we had a hard time putting our pram (even when it’s folded, it still takes up a lot of space) into the tram and didn’t want to repeat the experiment.

One of Lisbon’s unique features is viewpoints called miradouros. Since the city is located on hills, lots of viewpoints can be found here – not only on hills but also on roofs of buildings, for example, on the Triumphal Arch or on top of one of the largest cathedrals. And each of them has a breathtaking view. The city itself, a huge mouth of the Tagus, bridges, castles, squares, fortresses, and basilicas look stunning day and night. Standing on viewpoints, one realizes that everything which tourists visit Lisbon for lies right before them. 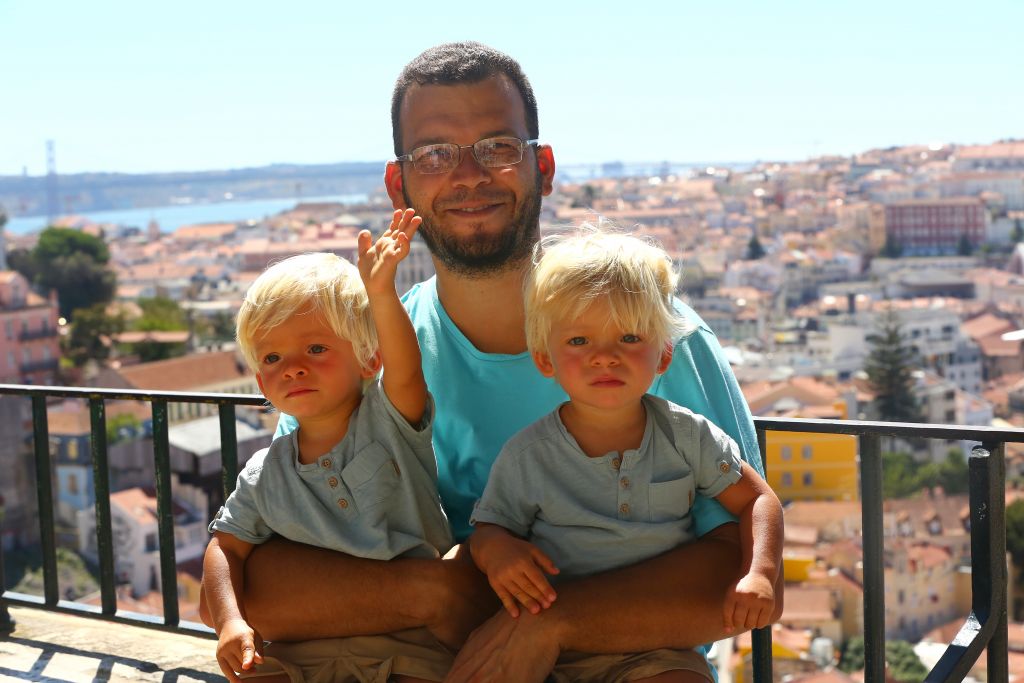 We particularly liked walking around the city in the evening. We are generally “evening” people, and we find evenings in many countries rather boring, because everything is closed, it’s quiet, and there’s no activity around. Lisbon is different. It’s noisy and cheerful here in the evening. Various shops and eateries are open till late. Tourists are walking everywhere. For instance, a central district called Bairro Alto is considered to be a real epicentre of Lisbon’s nightlife. Most shops, bars, and restaurants are open till night here, and there are always lots of people. 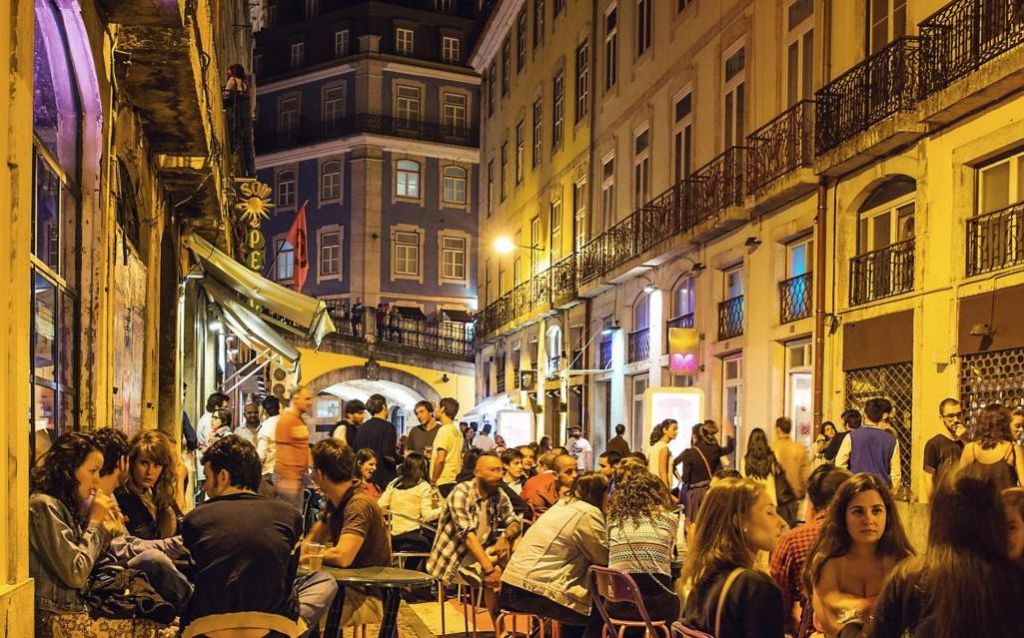 Numerous restaurants and clubs in the center of Lisbon are filled with visitors until late at night.

It’s not rich in ancient landmarks, as the district started to be built only in the 16th century. Intellectual and creative people from all over the country strived to get here then. The atmosphere of culture and a sort of bohemianism can still be felt here. Entertainment and trade facilities as well as a huge amount of graffiti on the walls of houses neighbour art and antique shops, galleries, and museums. 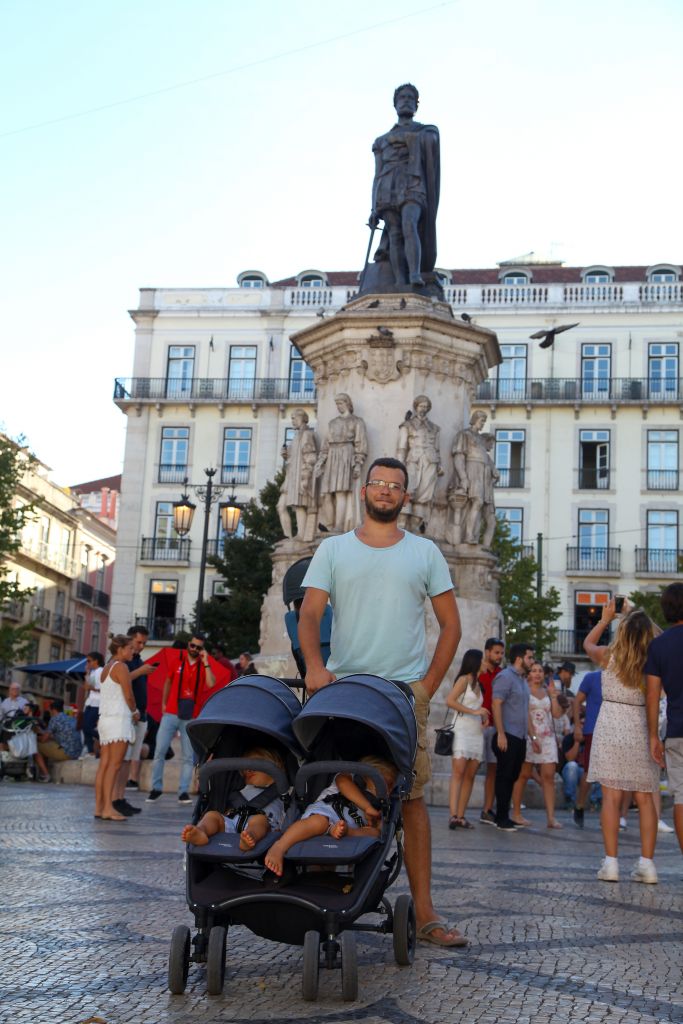 The Commerce Square is one of the major squares in the city. Its history dates back to the 16th century, when the royal palace located in the western part of the square was built. It has another, newer and, by the way, now official name – Palace Yard. However, most local citizens still prefer to call it the Commerce Square. 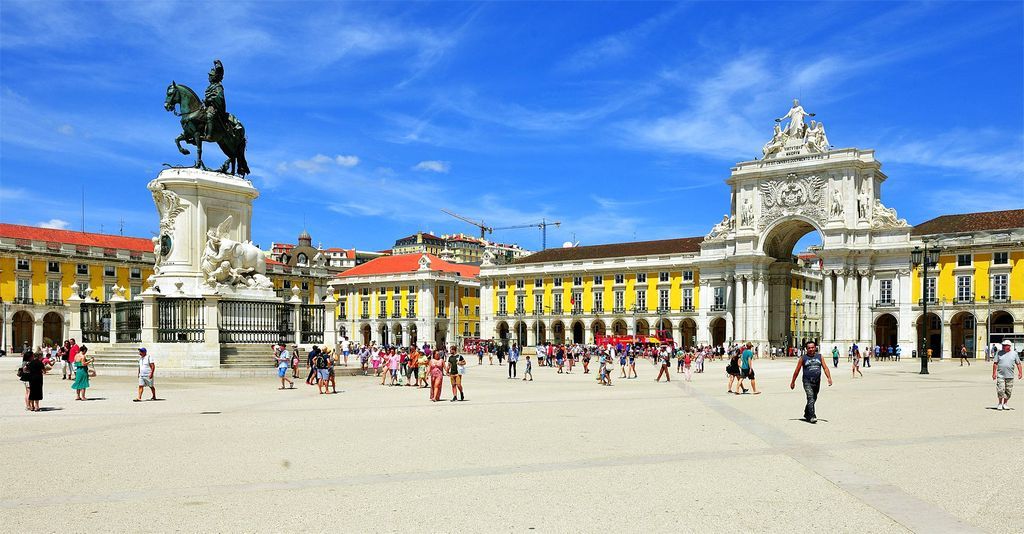 There’s a port near the square, where foreign aristocratic and ambassadorial ships used to arrive. And merchant ships, of course, that brought exotic goods to Lisbon from other countries. The arrival of such ships was always a major event for local merchants, so trading was in full swing right on the pier.

All major city events – celebrations, processions, parades, executions, etc. – used to be held here. The modern Commerce Square remains the place where significant city events – celebrations, concerts, performances – take place. It’s one of Lisbon’s most popular tourist attractions that is definitely worth visiting. By the way, the Commerce Square is one of the largest ones in the world – 180×200 metres. The entrance to the square is the Triumphal Arch with a viewpoint on top of it.

Evening walk with ice cream on the Commerce Square

The Castle That Started History

São Jorge Castle is a fortress that stands on one of the hills and can be seen from anywhere in the city. It is the cornerstone of the Portuguese capital. It is this castle that the history of the city started from. In the 8th century, an alcázar, a powerful Moorish fortress, stood here. In the 12th century, the first king of the country – Afonso Henriques – conquered the fortress making it a royal castle. However, it was far from being easy to conquer it. It took an army of 27,000 people and four months to accomplish the task. Thus, after the event, King Afonso became a real national hero.

Later, the royal residence was moved to the Tagus bank, to the Palace Yard, while the castle, severely damaged after one of the biggest earthquakes (13th century), was forgotten by monarchical families. The 1755 earthquake completely destroyed it. Only some palace walls and towers remained intact. In the 20th century, it was partially reconstructed and became one of Lisbon’s brightest historic sites. 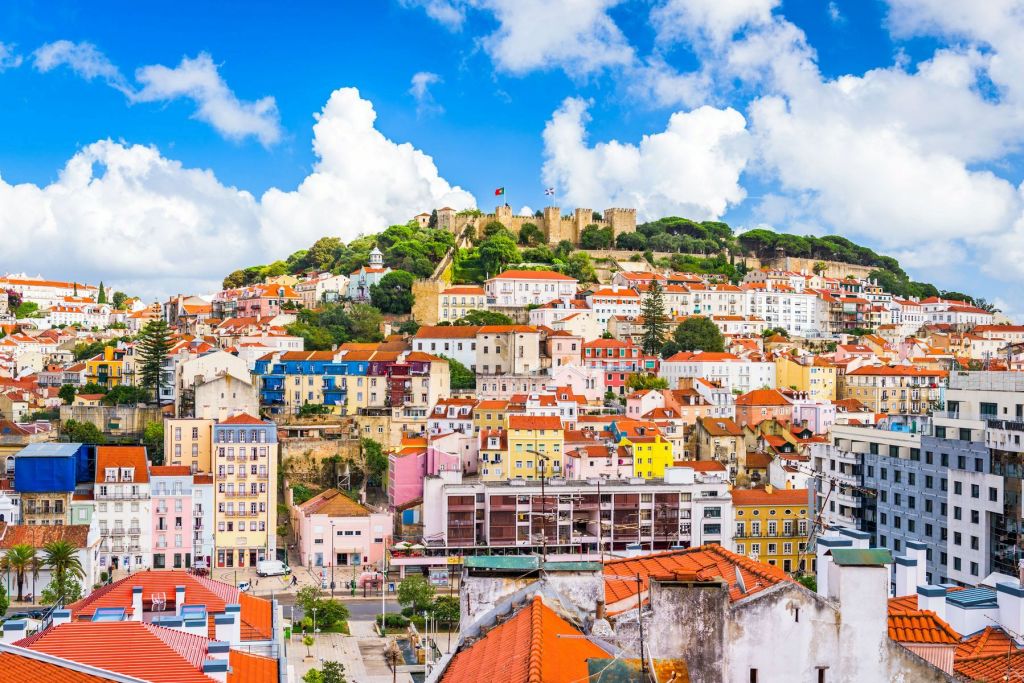 The thing that attracts most tourists to the castle is stunning views that can be relished from the ramparts. The whole fortress is a sort of one large miradouro. Nevertheless, there’s also a separate viewpoint on the square before the castle.

The National Pantheon (the Church of Santa Engrácia) is a majestic construction from pink marble, a former (or rather failed) church having an interesting history. It started to be built as far back as in the 17th century. However, due to various reasons, its construction couldn’t be finished, which spurred the creation of a corresponding national proverb – “obras de Santa Engrácia” (Saint Engrácia’s works) – used to talk about something that continues endlessly. The church was completed only in 1966 – three centuries after the start of the construction! There was a grand opening, and the church was converted into a pantheon. Many great Portuguese, presidents, sailors, writers repose here. There’s even a cenotaph to Vasco da Gama.

The building is truly impressive – it is 80 metres high. Its dome, made in the form of a Greek cross, can be seen from many Lisbon districts. There’s a traditional miradouro under the dome, from which almost the whole city comes into view. 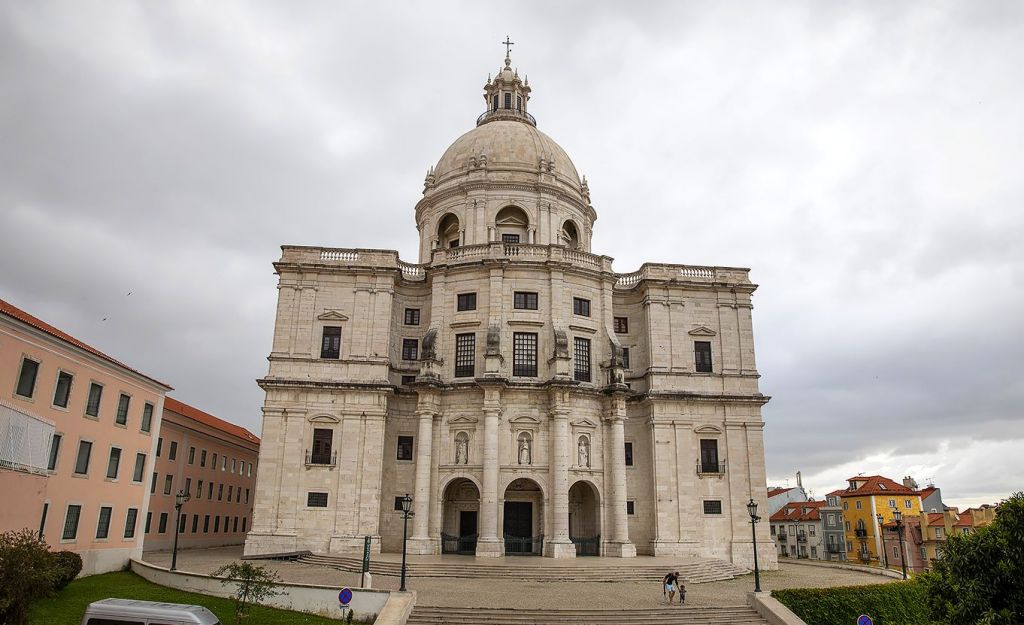 Lisbon is located on the north bank of the river. The south bank is connected to the north one with several bridges. The 25th of April Bridge and the Vasco da Gama Bridge are the largest ones.

The 25th of April Bridge was built in 1966. It’s a large suspension bridge used both by cars and trains. Using the bridge on the way from Almada to Lisbon requires a toll, while the opposite direction is free. Although there’s a larger road bridge, the 25th of April Bridge is the most convenient and popular one, which leads to heavy traffic and rush-hour traffic jams – towards Lisbon in the morning and towards the south bank in the evening. 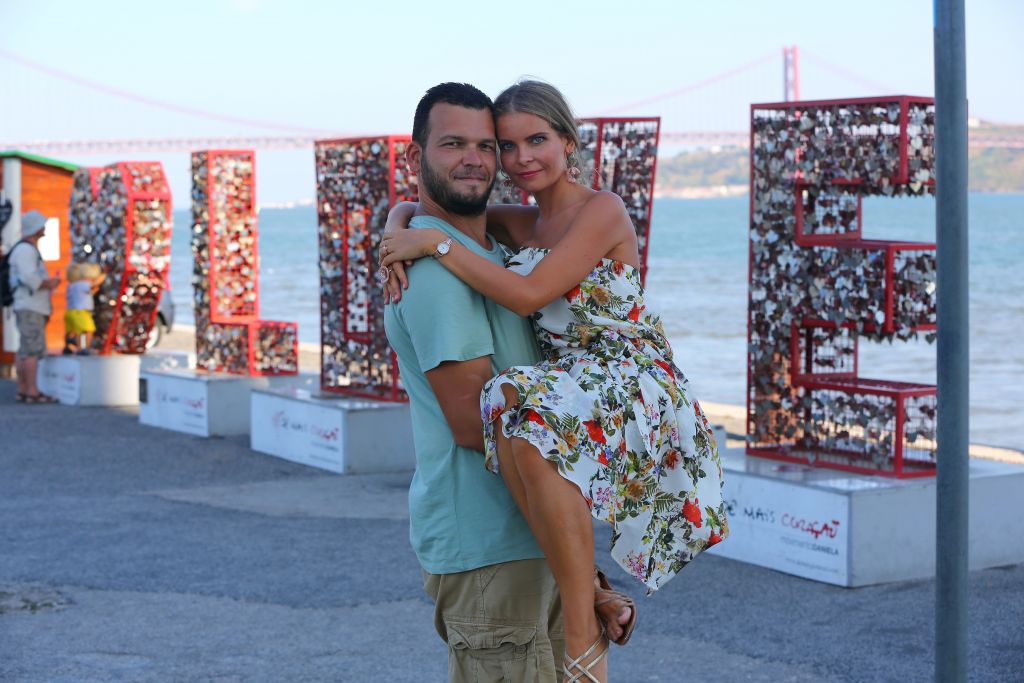 On the promenade there is an interesting installation for “love locks” …

… and a magnificent view of the 25th of April Bridge

The Vasco da Gama Bridge was built later – in 1998. It is over 17 km long which makes it one of the longest bridges in Europe. It’s a motorway connecting Lisbon and Setúbal, one of the southmost Portuguese cities. We didn’t have a chance to drive across it, but we were impressed by it. It’s a truly magnificent construction. By the way, it also has a toll – towards the capital only as well. 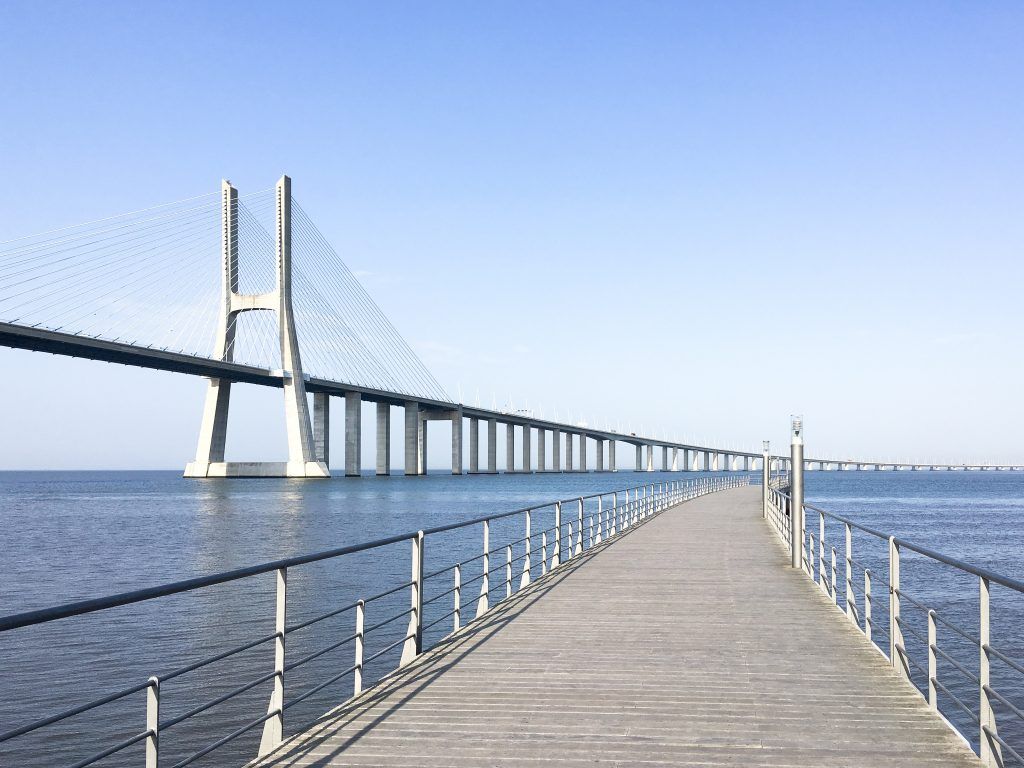 We’ve never seen a city so rich in street performers as Lisbon. Musicians – quite good ones – are literally everywhere. You can even come across street ensembles with cool equipment, electric guitars, and drums. They play and sell their disc recordings right onsite.

There are also magicians and dancers performing on the streets. Michael Jr and Robert love such performances. For example, once we visited the following open-air breakdance performance. Our 18-month boys were so impressed and inspired by it that they practiced and tried to repeat the movements during several weeks then.

Lisbon has lots of parks. There are dozens of various ones – large and small, fee-paying and free. Some of the parks are used for walks only and are a sort of woods or an arboretum. There are palace parks and amusement parks ideal for family entertainment and recreation. There are a couple of botanical gardens, including the main city one where over 1,500 plants from all over the world are collected. 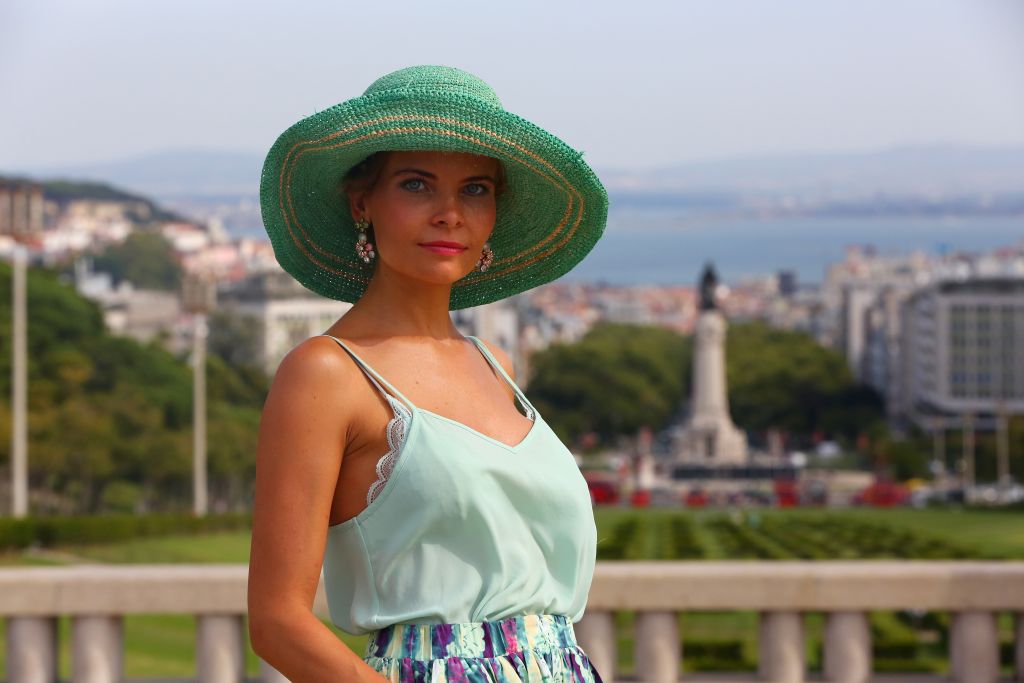 The Eduardo VII Park is a central and the largest park in the city. It’s situated on a slope of a hill and goes right down to the river. It’s a lovely neat place whose picturesqueness and bright colours leave an indelible impression. There are lots of trees, so it’s a wonderful spot for walks and rest even when it’s very hot. The park starts at the top of a hill, where an observation point that has a fantastic view of Lisbon, the Tagus, and the opposite bank can be found. The viewpoint also has a fountain – a monument to Liberty Day (25 April). 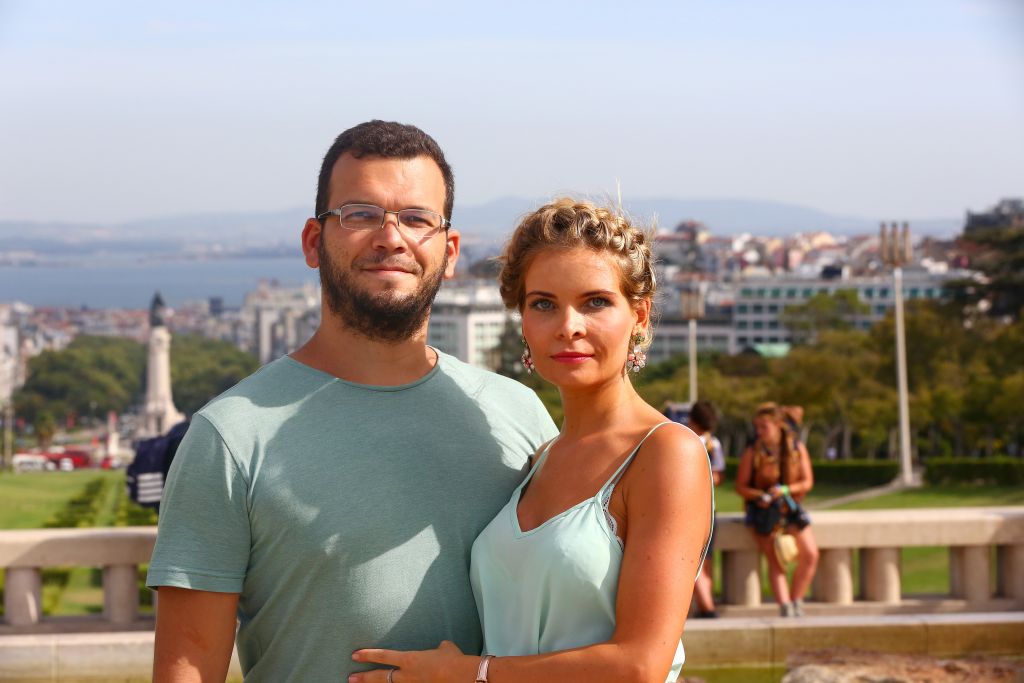 The park has a lot of ponds with fish and birds as well as its own botanical garden. It consists of three sectors: the biggest one has a collection of rare tree species, the medium one is for tropical plants, and the smallest one is for cacti and succulents.

Descending the park’s massive central promenade, you can get to the very heart of the city – the Marquis of Pombal Square, from where you can walk down straight to the riverbank. Having a unique and memorable landscape design, the promenade itself is kind of a landmark of the gorgeous park.