The São Bento railway station is situated near the city hall. It dates from the late 19th century. The building is neoclassical in style and is famous for its interior, and a large number of incredible azulejo tiles specifically. The walls of the lobby are decorated with huge panels from ceramic tiles coloured in traditional shades of blue and white. 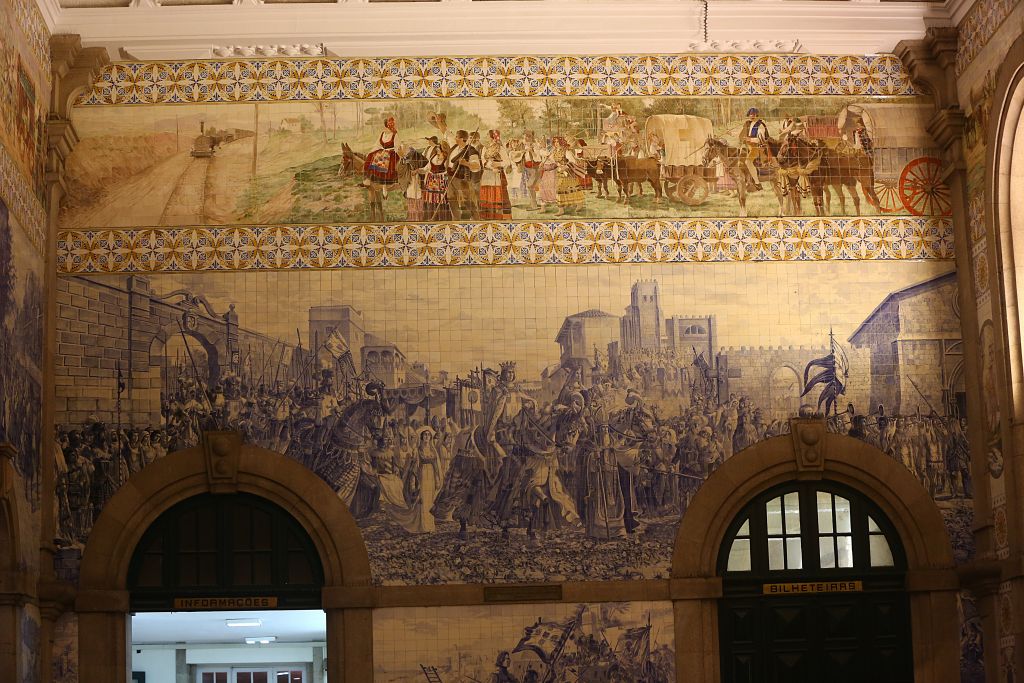 They depict different historical events connected with the railway as well as the Portuguese life as a whole: military battles, celebrations on the occasion of the kings’ arrival, etc. The snow-white stucco ceiling adds to the overall magnificence. 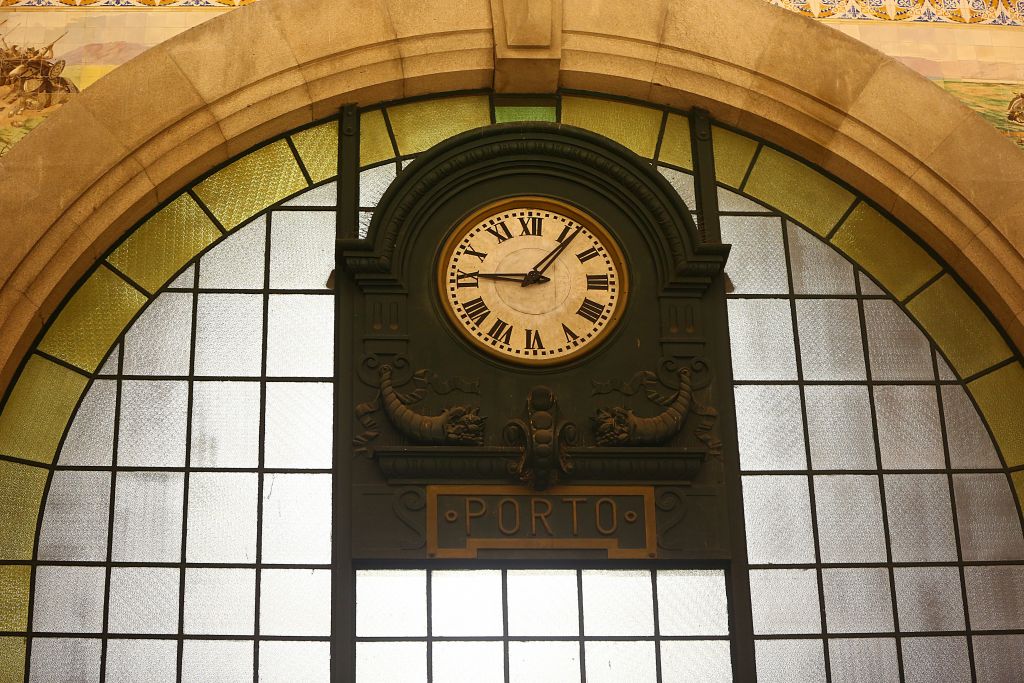 The old Catholic Clérigos Church is one of the symbols of Porto. It’s famous for its bell tower that is the tallest church tower in the city. Of course, it’s not that tall compared to modern buildings. It’s just 76 metres high. But the church is located on an elevation, so its bell tower can be seen from almost anywhere in the city. 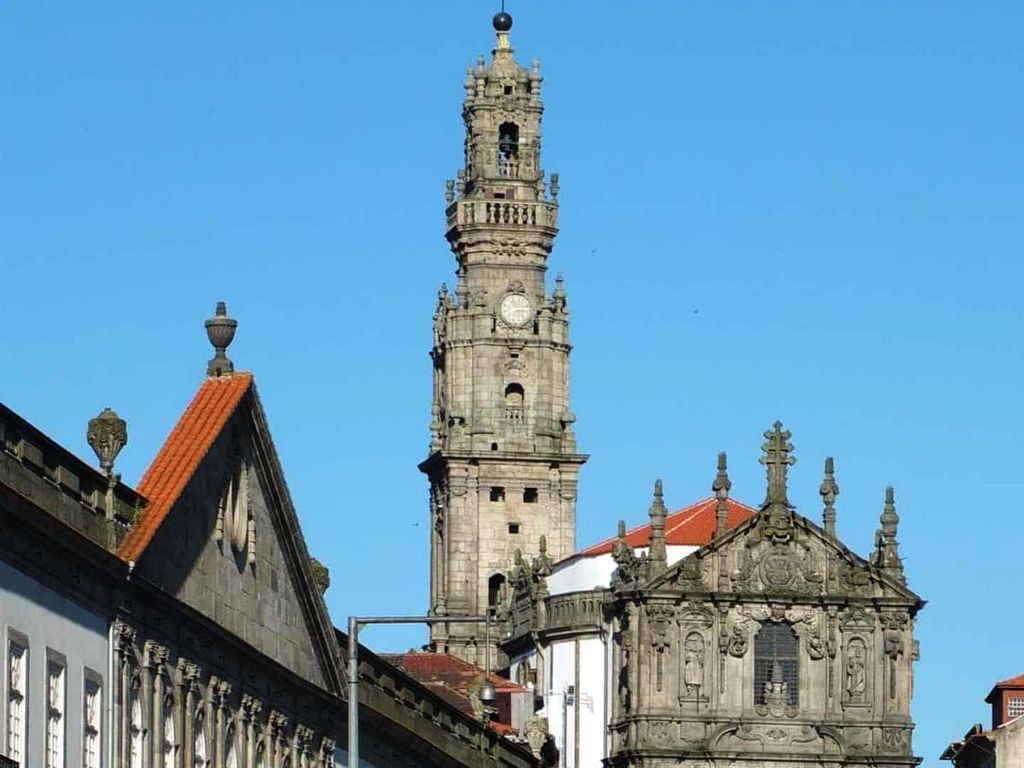 There’s an observation deck at the top that has a breathtaking view of the city quarters. Having come to the place, you can go to the top of the tower straight away without visiting the church or can take the recommended route and admire its rich interior decorations, choirs, organ, marble and granite carvings. The church was built in 1750. It still functions and holds ceremonies and services. 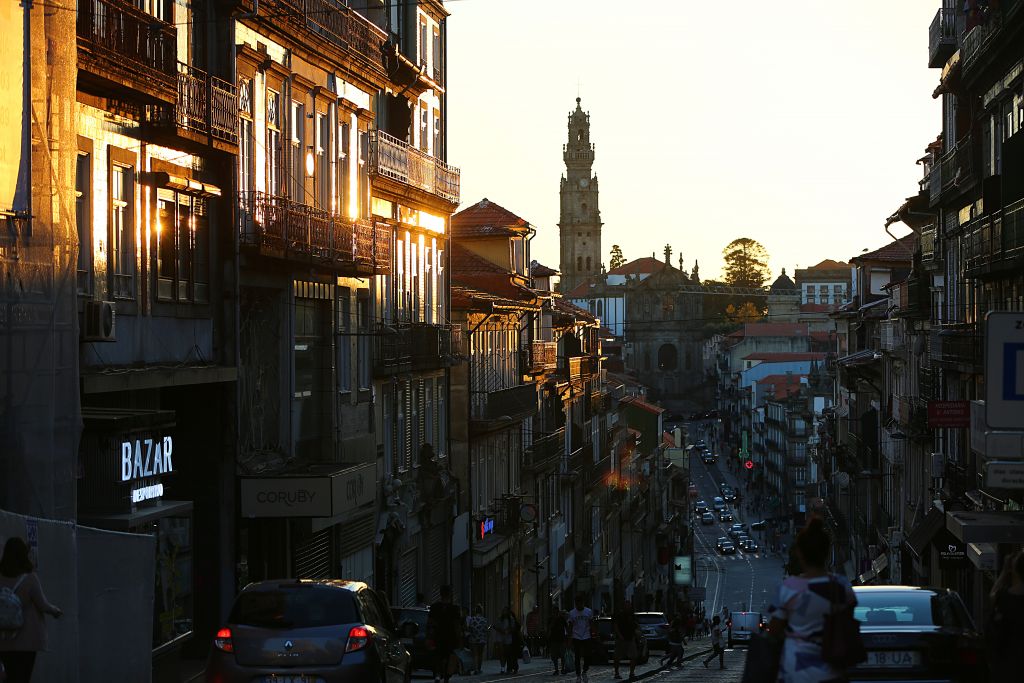 The Carmo Church (Igreja do Carmo) is another church that takes tourists’ breath away at first sight. It’s a large pompous baroque construction erected in the mid 18th century. Besides the gorgeous main facade and rich interior decorations, the church has two interesting features. The first one is a huge azulejo painting on the side facade. It tells a story about the creation of the Order of Carmelites.

The second feature is the size of the church. When you are approaching it, it seems that it has a very wide sort of double pediment. However, it turns out to be an illusion. The thing is, another (as interesting) building – the Carmelite Church – is situated close by. The two churches are separated by another curious construction that is only one metre wide! Despite its tininess, the building is considered to be a separate house. It must even have its own address. 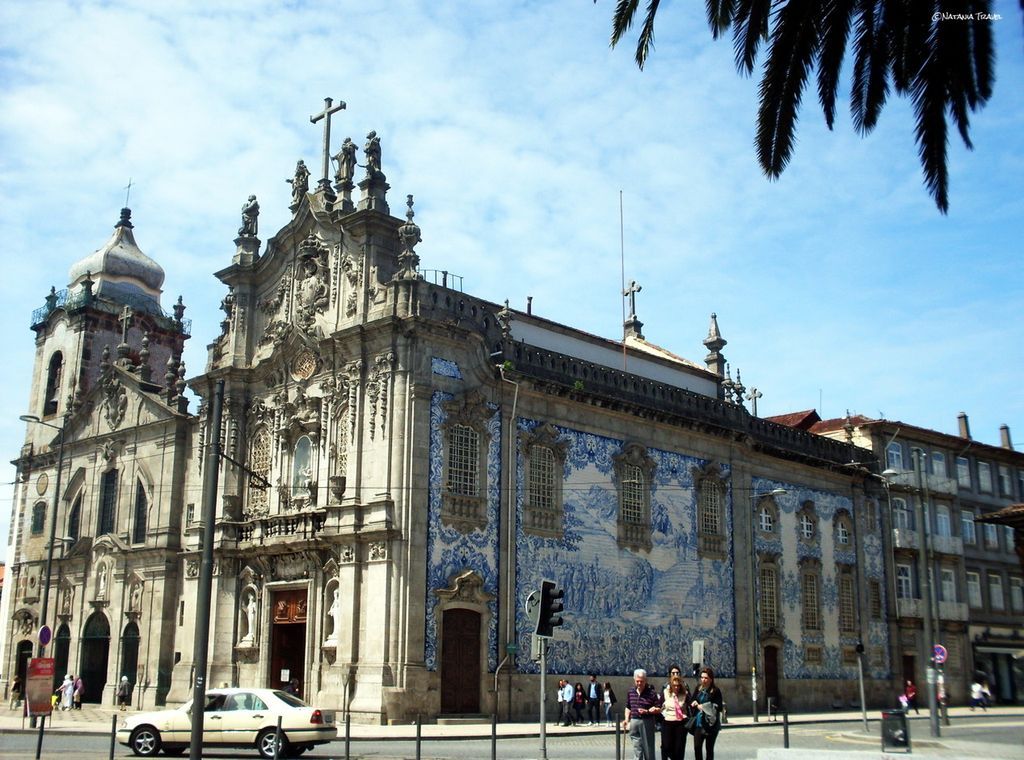 The Porto Cathedral, which had been built for almost two centuries, is one of the major historic and religious monuments of the country. It’s an imposing construction that looks almost like a fortress – it has two grand towers with domes, an arch entrance crowned with a wall of merlons, and a circular stained glass rose window over the entrance typical of the Gothic style. 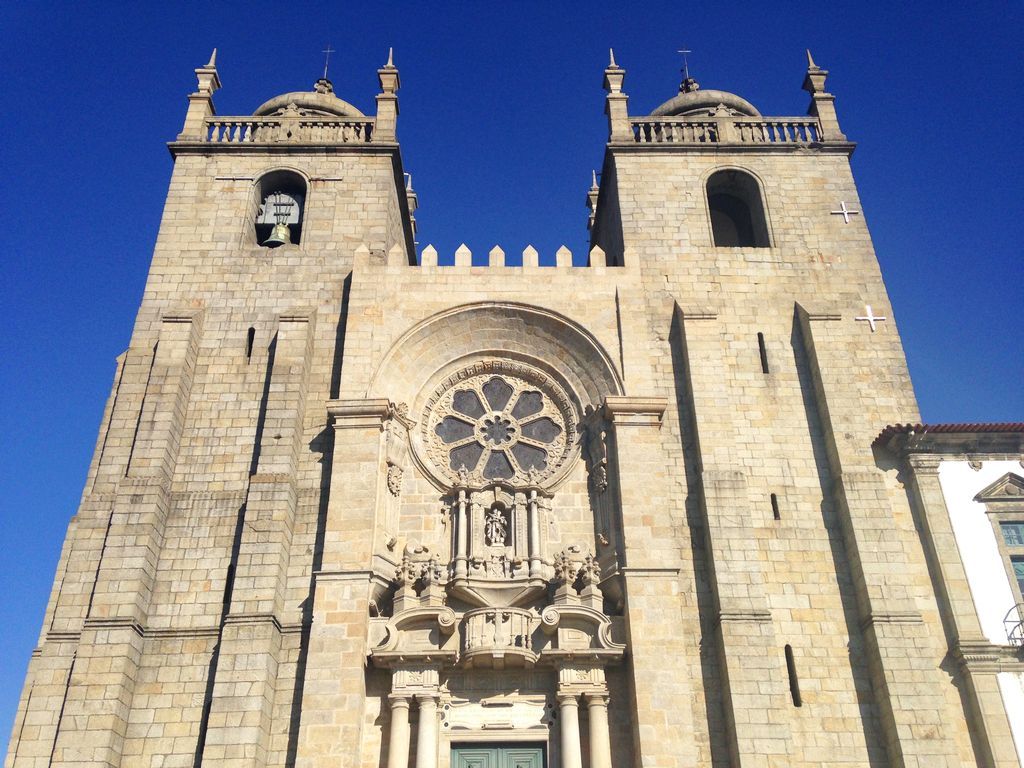 Inside, there are huge vaults, stone columns, and a large organ situated very high, almost at the same level as the circular window. Despite being so strict and awe-inspiring, the Porto Cathedral wasn’t able to dispense with azulejo. Many corridors inside the building are decorated with artistic pictures from white and blue tiles.

The Episcopal Palace – the residence of the bishops of Porto – is a majestic snow-white building situated right beside the Porto Cathedral. Back in the 12th century, a small construction was standing here, but it was demolished in the 18th century and replaced by the real palace. The inside is all luxury: huge marble staircases, carpets, paintings, spacious halls grand enough to receive the Pope (who came here, by the way). The windows have a wonderful view of the river and Luís I Bridge.

The complex is situated on a hill, so it proudly rises above the surrounding houses drawing admiring glances of tourists. 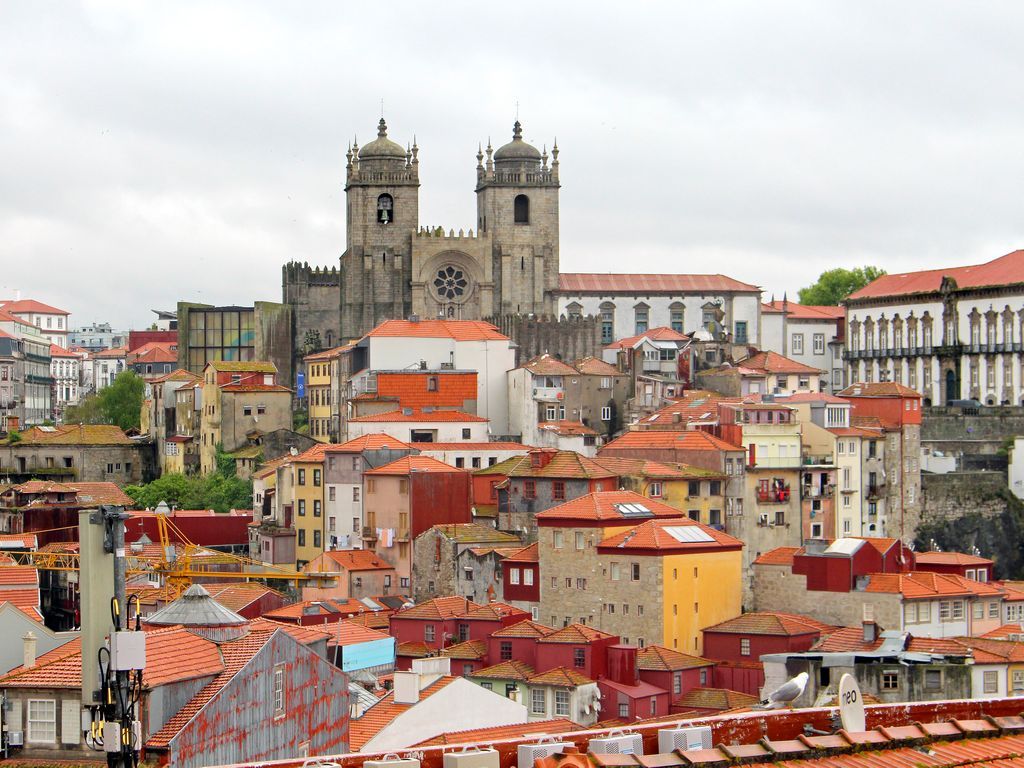 Porto has lots of various large and small parks. All of them are well-groomed, have landscape design, ponds, and are full of birds. Even when it was cool and windy (the weather was like this almost all of the time), the parks were not deserted – there were always lots of people in each of them.

The Crystal Palace Gardens is one of the most popular parks. There used to be a palace once that was made of glass and metal, which was a real architectural wonder in the 19th century. Unfortunately, there’s no palace anymore. Instead of it, there’s a huge hemisphere-shaped pavilion where different events, exhibitions, performances, etc. are held.

The park area is very beautiful, green, planted with flowers. It’s divided into several zones with lovely names. For example, “Pink Garden” or “Garden of Fragrances”. There are a lot of sculptures and installations – both modern and old.

Walking around Porto, you constantly come across small parks and gardens, which can seem quite unexpected among large noisy streets and historic landmarks. You can sit on a bench to relax in the shade of trees or loll around in the sun on an open lawn sitting right on the grass. 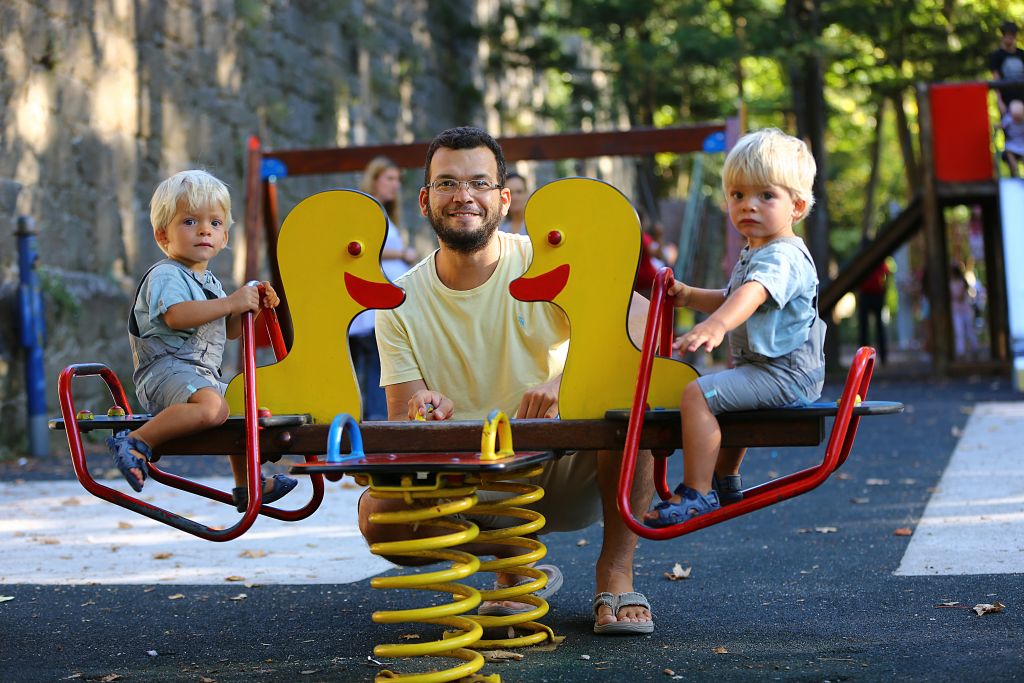 A place like this can be found near the Clérigos Church, for instance. So straight after a tiring rise to the observation deck on the tower, you can drop into the small cosy park planted with olive trees. You can have a rest and grab a snack at one of the cafes located in the middle of the park. 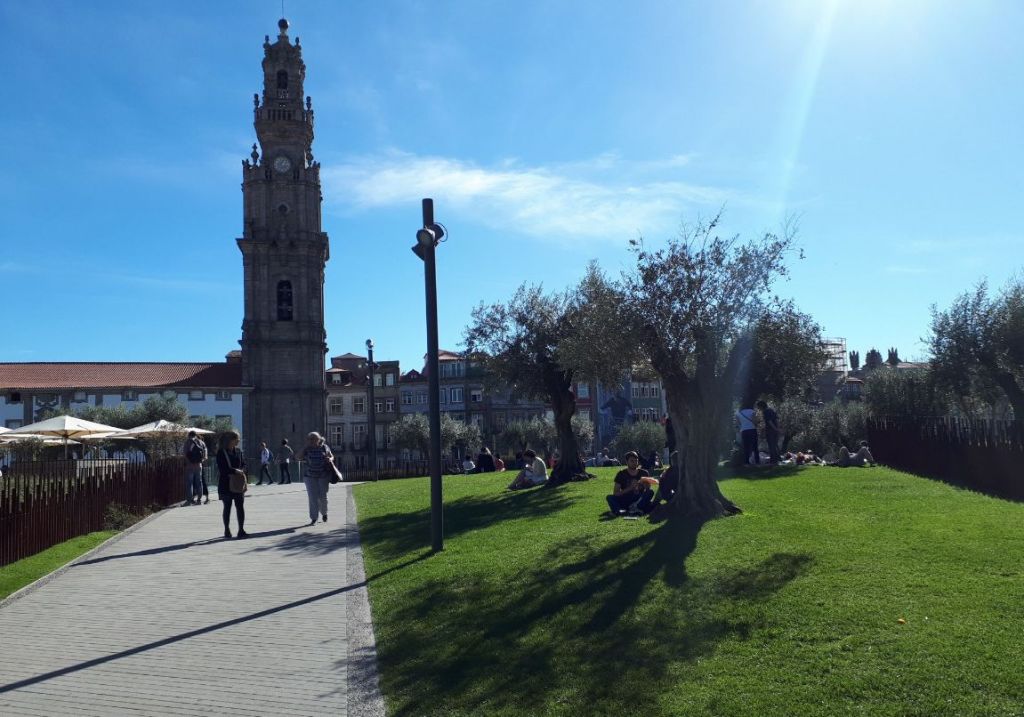 Portu and Portugal as a whole have one feature that we were pleasantly surprised at – the role of family business. Old workshops, bakeries, tiny eateries with home-made food, and shops opened at the beginning of the previous century are scattered all over here. Some of them have been working for decades or even centuries. Let’s take as an example a small shoe workshop making shoes to order since 1750. Someone’s ancestor founded the business once, and it’s been handed down with all the knowledge and skills from generation to generation since then. Such a dynasty business alone can be considered a historic landmark. 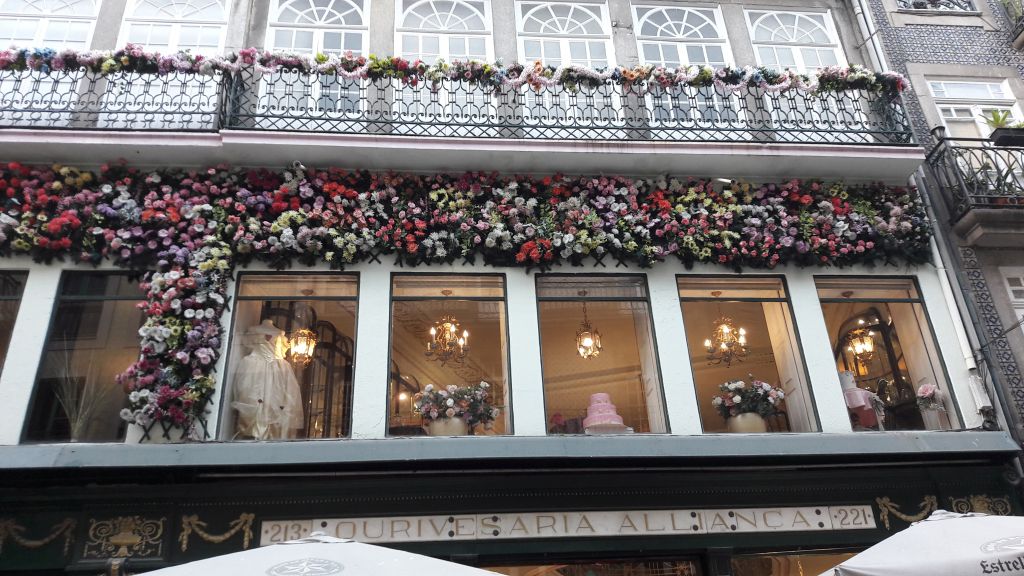 Old jewelry and gift shop. On the ground floor there is a cafe.

These places are usually decorated in a very authentic way. The interior is often reconstructed to preserve the unique atmosphere and personality of the place.