Tulum is one of the most prominent archaeological sites in Mexico. Despite its relatively humble size (it’s significantly smaller than the Mayan Chichen Itza site), the settlement is unique in many ways, since it’s practically the only settlement built by the shore. The Mayans preferred to settle farther from the shore and deeper in the jungle. 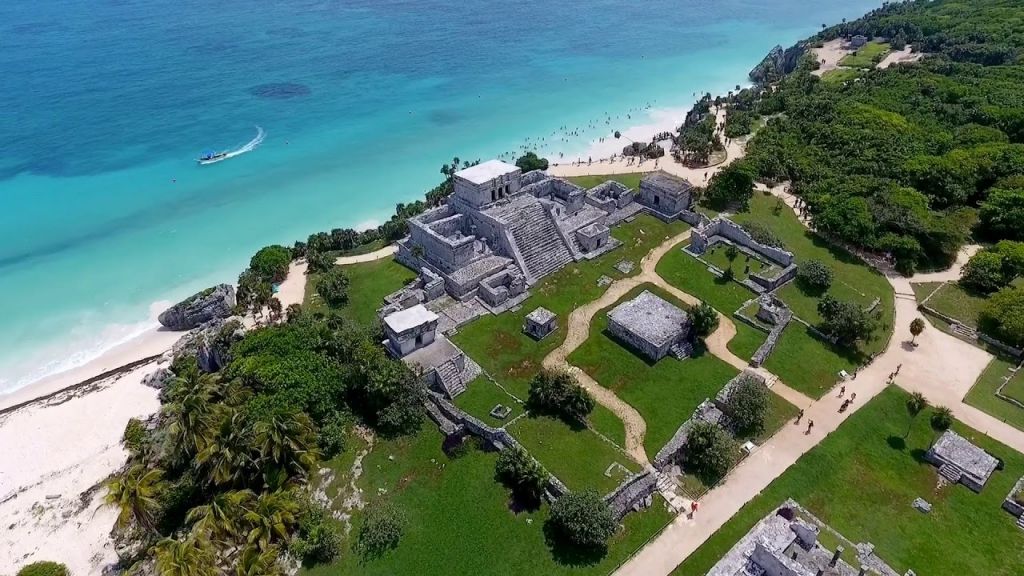 The first settlement in the area was constructed in the 12th Century. By then, the majority of the Mayan settlements were in decline, but Tulum continued to thrive and develop, as it was the only sea port and the largest trade center. This is where all the Mexican and Central American land and marine paths crossed. 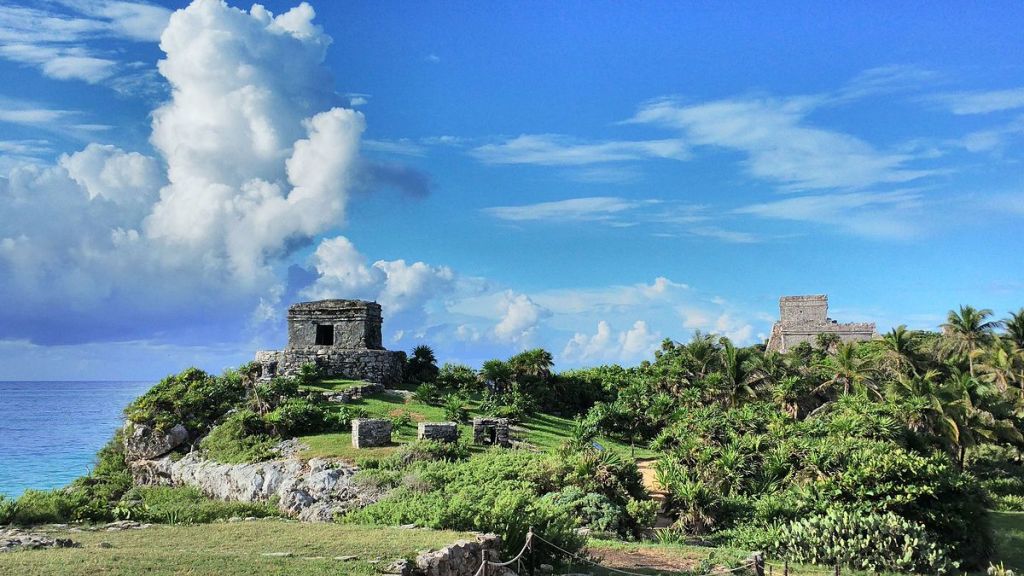 We were incredibly lucky with the weather because the day of our tour was neither cloudy nor hot, so we could comfortably explore the ancient ruins.

El Castillo is the first building to catch the eye. The 7.5m high temple was built on the edge of a 12m cliff. It wasn’t just a place for rituals and ceremonies but also a lighthouse, beaconing the way to trade ships.

Another structure that has well preserved to the modern day is the Temple of Frescoes. Spanning 3 floors, its walls are adorned with images of the Descending God, which the locals used to worship. Priests would use the top floor to observe the sun’s movement.

Tulum was one of the few settlements surrounded by fort walls 3-5m high and 8m thick, which is peculiar, since the Mayans rarely fortified their settlements. The part of the wall with narrow entryways, which served as the town’s gates, is still here today.

Small buildings in the southwest and northwest corners served as watchtowers, while the cenote by the north wall was the tribe’s source of fresh water. This infrastructure made Tulum one of the most impregnable Mayan settlements. By the way, the settlement was named “Tulum” – a Yucatan Mayan word for “wall” – by a famous explorer John Stevens in the mid-19th Century. The Mayans called their town – Zama or “the city of light”.

At its prime, Tulum had a population of 600, but the structures inside belonged to rulers and priests. Other inhabitants resided outside the city walls. After the Spanish conquistadors took over the lands, the settlement flourished for a few more decades before it abated toward the end of the 16th Century.

The ancient settlement is surrounded by a deep jungle, which carries the status of a national reserve.

In the park there are tamed coatis walking around for visitors to take pictures with.

The reserve is home to hundreds of types of plants, including agave, which serves as an ingredient in tequila. Next to a small agave bed there is a monument to a jimador, chopping down the succulent’s thorny leaves.

We even found other fascinating and unusual displays, such as Elvis Presley’s and Marilyn Monroe’s amusing skeletons.

With over 6 thousand cenotes on the peninsula, they are the calling card of Mexico and Yucatan. These deep freshwater wells, formed as a result of collapsed limestone caves, can be as wide as a few dozen meters in diameter. Cenotes ensured an almost endless supply of drinking water for the Indian tribes even during the drought.

Mayans believed that cenotes were a gateway to the world of the dead, so they used their magic powers to perform various rituals and sacrifices. Today these wells and underground caves are very popular among divers, since they often go a few dozen meters deep.

Grand Cenote – one of the most famous cenotes in the area is located only a few kilometers from Tulum. This isn’t just a well but an entire system of interconnected underground caves. A part of the cenote is in open-air and looks like a small lake surrounded by cliffs. But if you dive and swim beneath the cavern roof, you will find yourself in a magical world of dark grottos, with long tree roots hanging from the walls, creating a surreal feel. 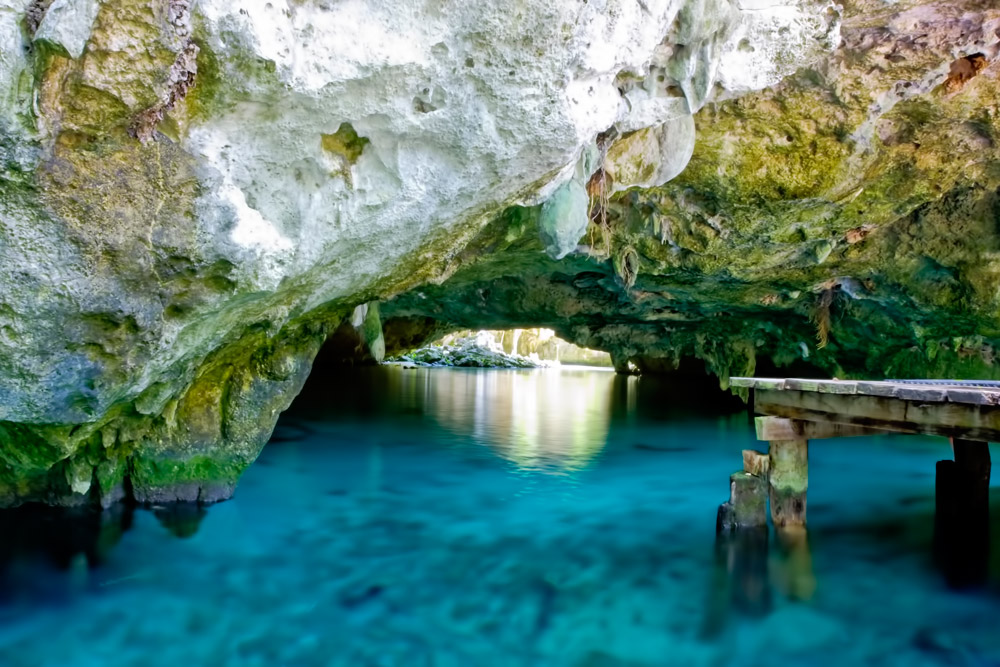 Cenote El Eden, only a couple of kilometers away from Playa del Carmen, is ideal for tourists with no diving experience. The well is a large, open, clear reservoir inhabited by tiny little fish. 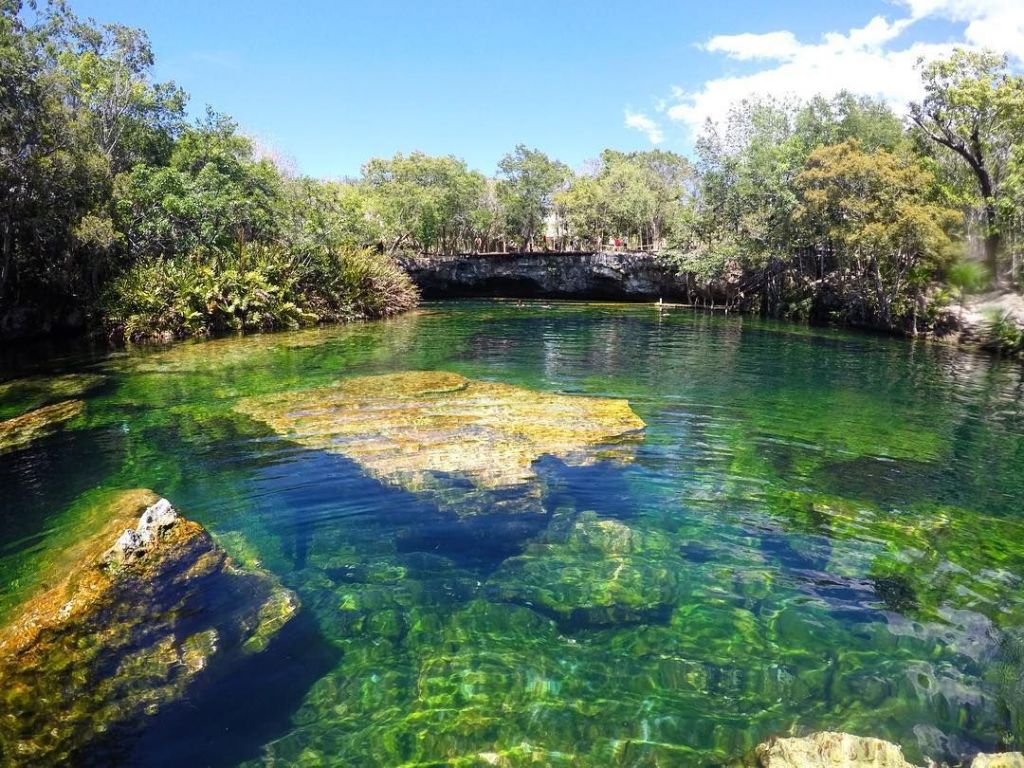 Cenote Calavera (skull) is definitely worth a visit. The underground reservoir has only three entryways, all of them in the cavern roof. If you dive in and look up, these holes resemble a skull with eye sockets and a mouth. 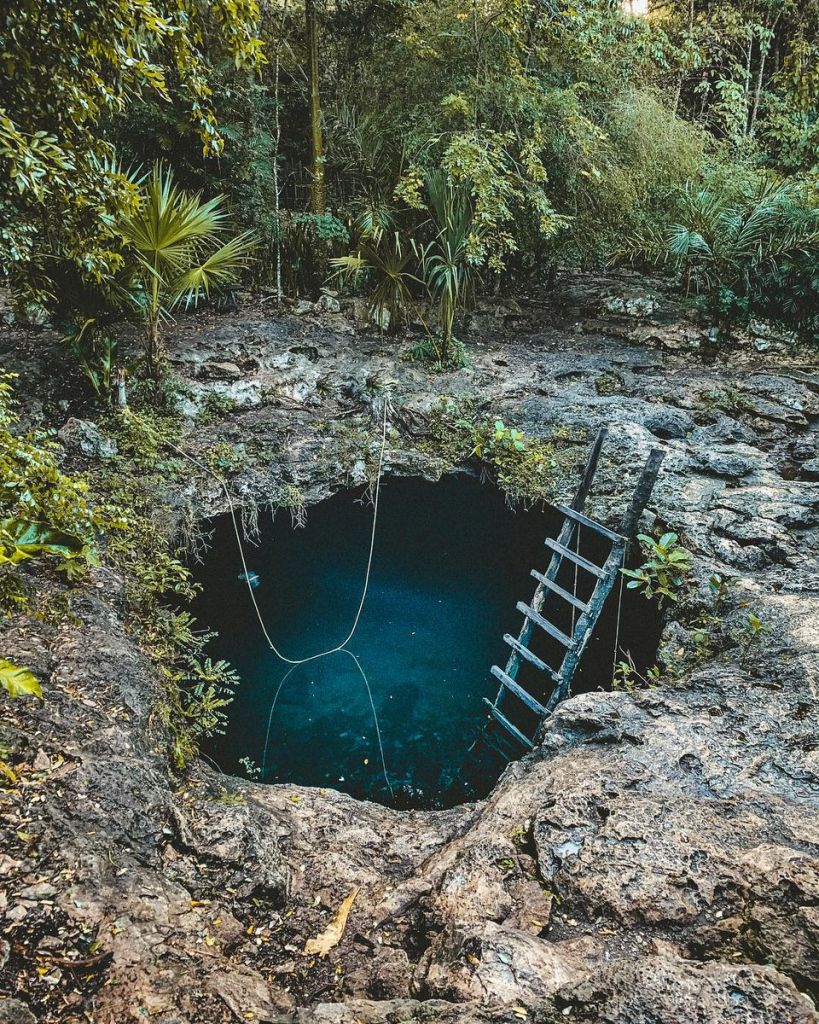 Only some 10km from Playa del Carmen lies a unique natural landmark – Rio Secreto, which literally means “secret river”. It was discovered under peculiar circumstances: Don Cleo, a Mexican farmer, accidentally stumbled upon a cavity on his land. 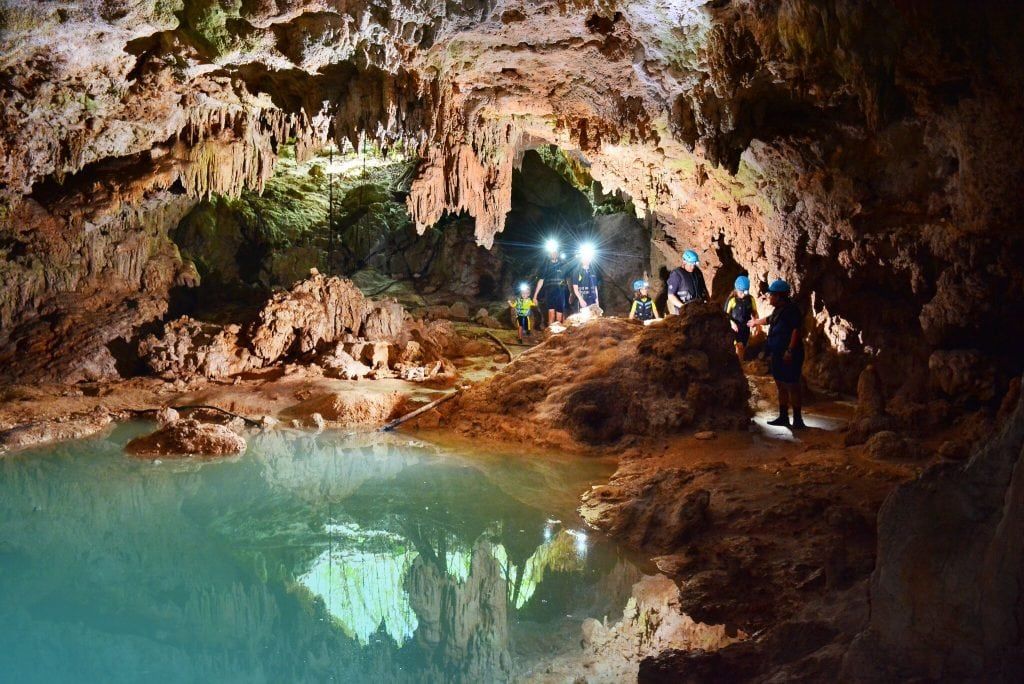 At first he thought it was a cenote – an underground cave filled with fresh water – which are in abundance in the area. But further excavations uncovered that this was an entire system of branching caves and channels 15km long, where Rio Secreto flows. 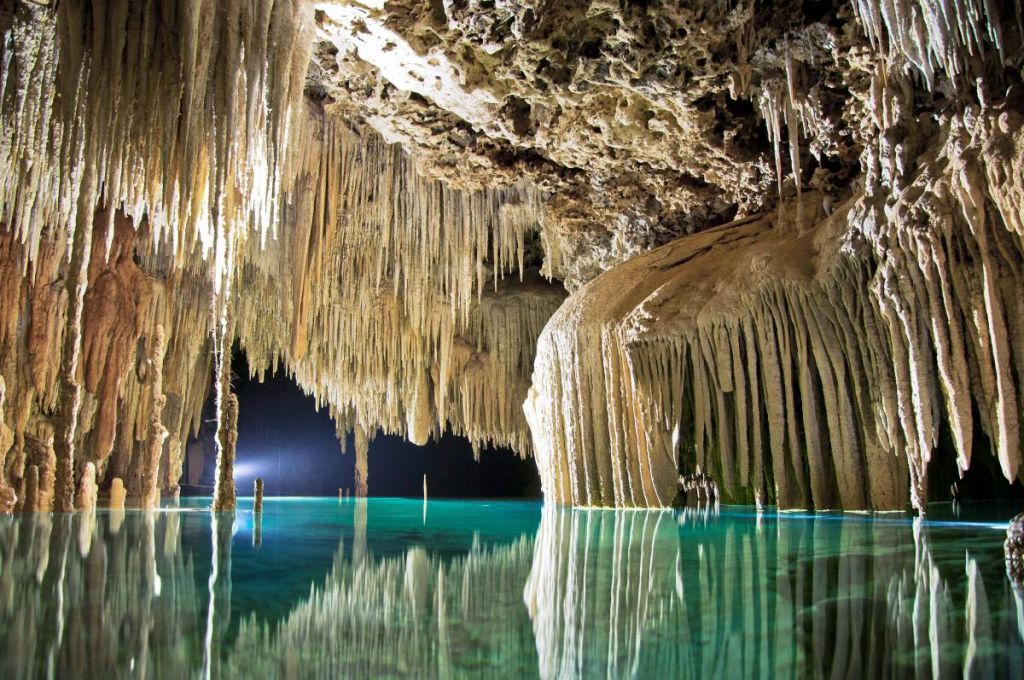 Tourists were first allowed underground in 2007, though only a few channels (a mere 600m) were open for entry. The cavern and grotto roofs are covered with oddly shaped fantastical stalactites and stalagmites. 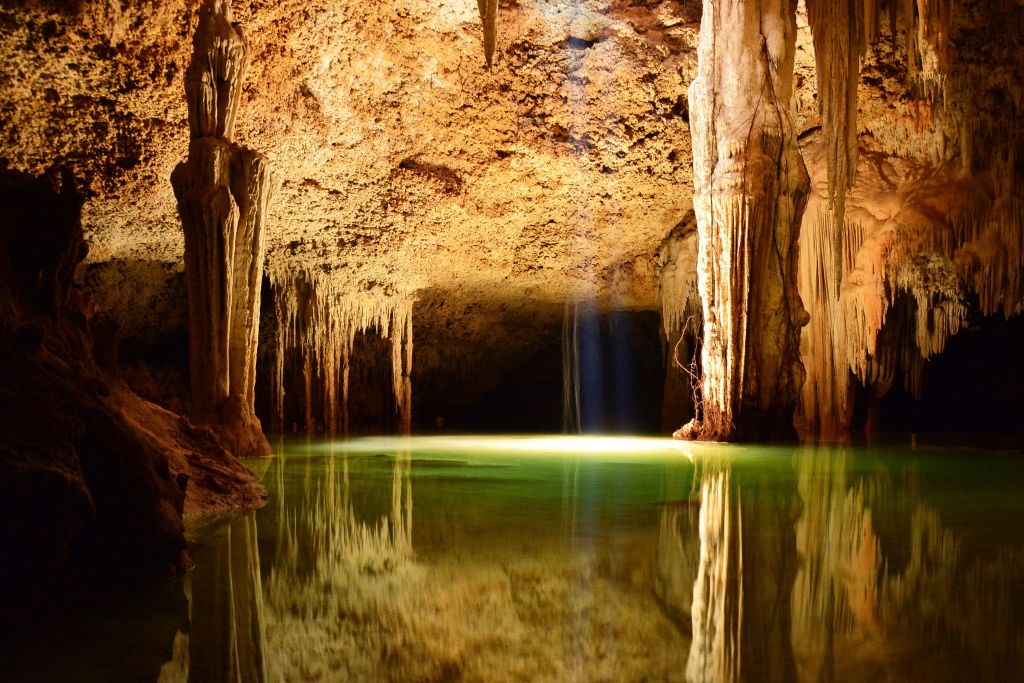 The water is so clean that you can even see the calloused corals carpeting the floor.  Due to its high mineral content, this water is used to produce Mexican cosmetics.

The Yucatan peninsula entices tourists with its natural wonders and archaeological memorials. A few months aren’t enough to study them all…

Perhaps, when the boys grow older we’ll return here so that they can appreciate nature’s incredible, exotic beauty and literally touch ancient history.