Perhaps, the most famous Mayan complex in Mexico is Chichen-Itza – a large city covering over 80 hectares. We couldn’t pass up the opportunity to visit what is recognized as one of the seven wonders of the world.

It is believed that the first Mayan settlement was founded right here in 455 AD. The city quickly developed and expanded, and by the end of the 9th Century it became a strong State, controlling almost all the northern Yucatan territories.

In the 10th Century it was taken over by the Toltecs, becoming the capital of these tribes. The influence of Toltec culture can be seen in the architecture and decor of the buildings that remain preserved to this day.

In 1178, Chichen-Itza was conquered by the unified Mayan troops under the command of Chief Hunak Keel. And despite the fact that the city was returned to the Mayan rule, it failed to return its old grandeur. The city gradually declined until it was completely deserted in 1194.

By the time the territory was conquered by Spaniards, all that remained of the once majestic city were empty, semi-destroyed buildings. Abandoned but not forgotten, Chichen-Itza was a sacred place for local tribes – a pilgrim destination. 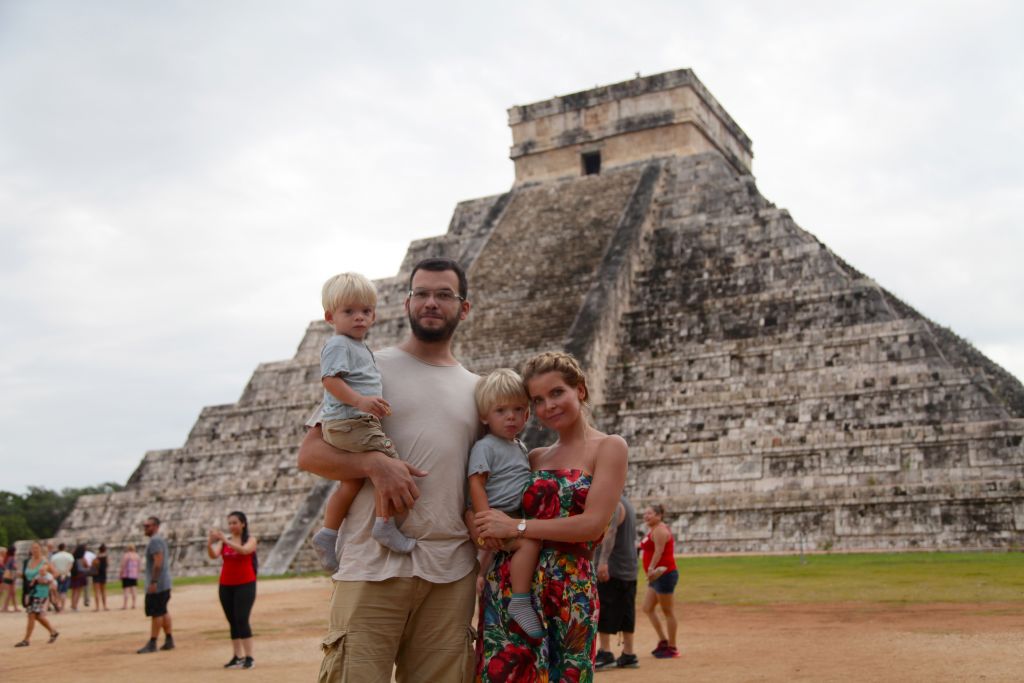 The most prominent structure in the complex is the Kukulkan pyramid, located in the center of the large area. Around 30m high, this structure has preserved its original appearance almost completely. The sanctuary at the top of the pyramid was once used for ritualistic sacrifices to god Kukulkan. 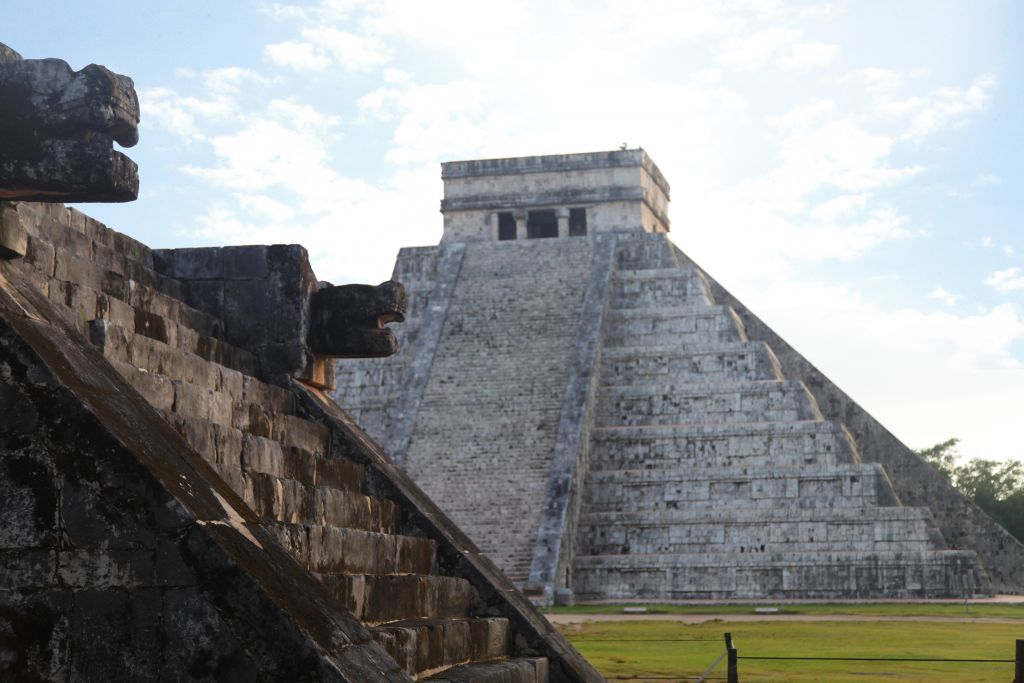 The pyramid is almost 100% symmetrical from all sides. The long staircase leading to the sanctuary’s entrance is adorned with stone balustrade on both sides, which look like snakes. Twice a year, during the spring and autumn equinox, the pyramid’s stepped sides cast a shadow on the balustrade, creating an interesting optical illusion – it looks like the snake comes to life and begins to move. If you want to catch a glimpse of the “Feathered snake” today, don’t worry, you won’t have to wait until the next equinox; a light show recreates it every evening. 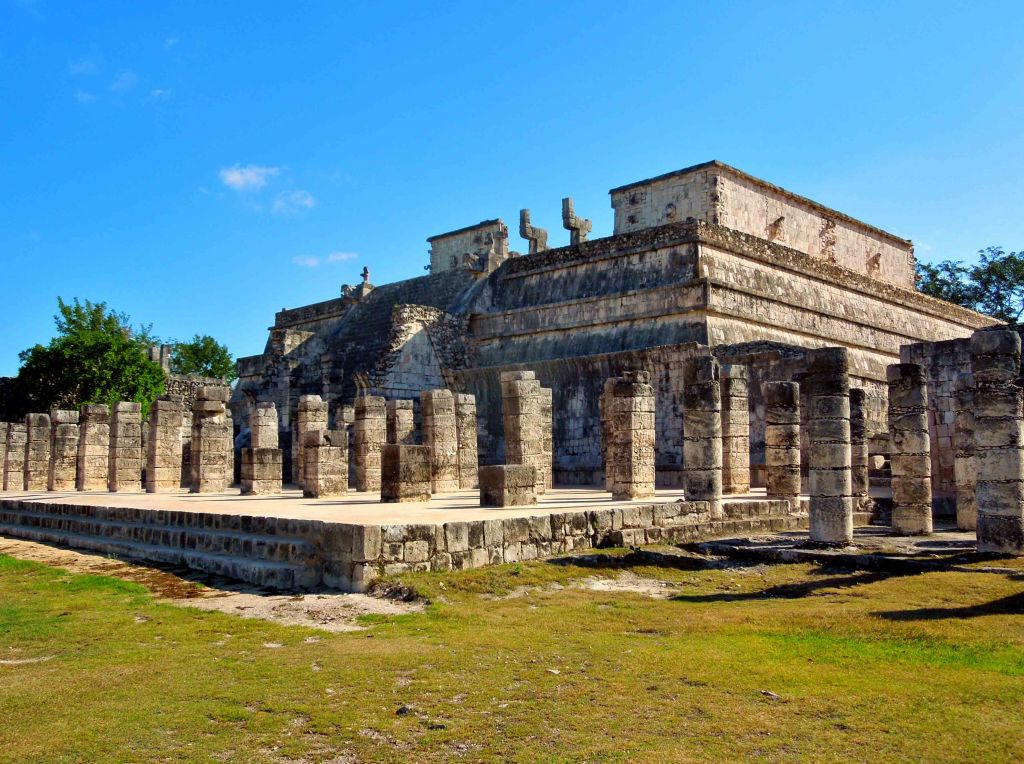 Chichen-Itza covered a large (according to the standards of that time) area. For example, the city had 7 fields for ball games, with the largest stadium being 135m long! 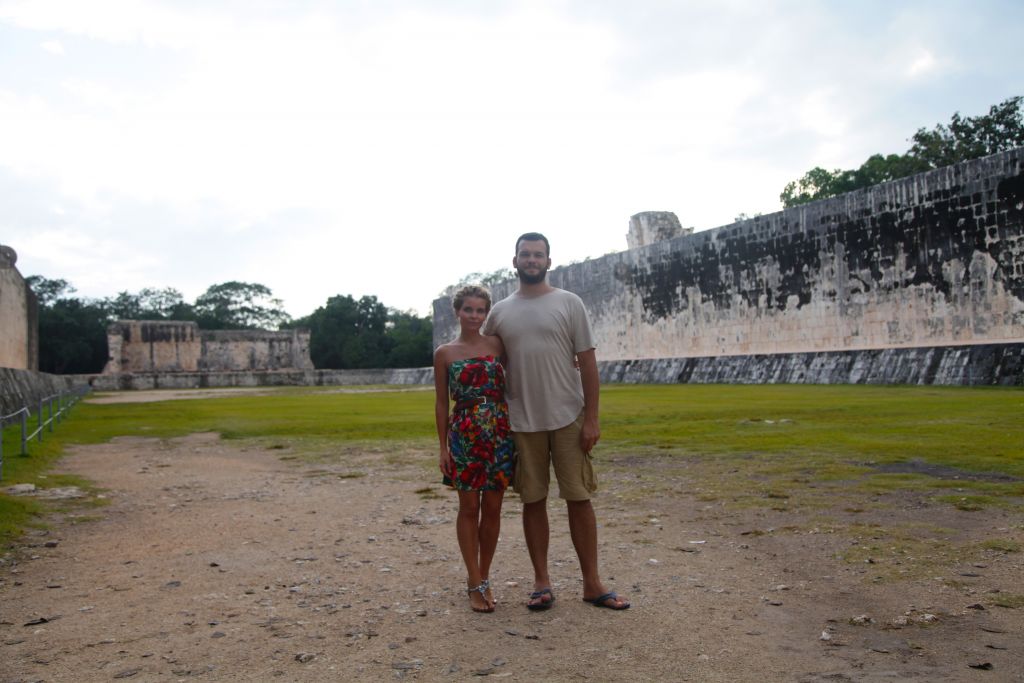 A group of a thousand columns is another fascinating part of this ancient city. At one point, this location served as a market, where locals could buy their products (the stalls would be set up between the columns). 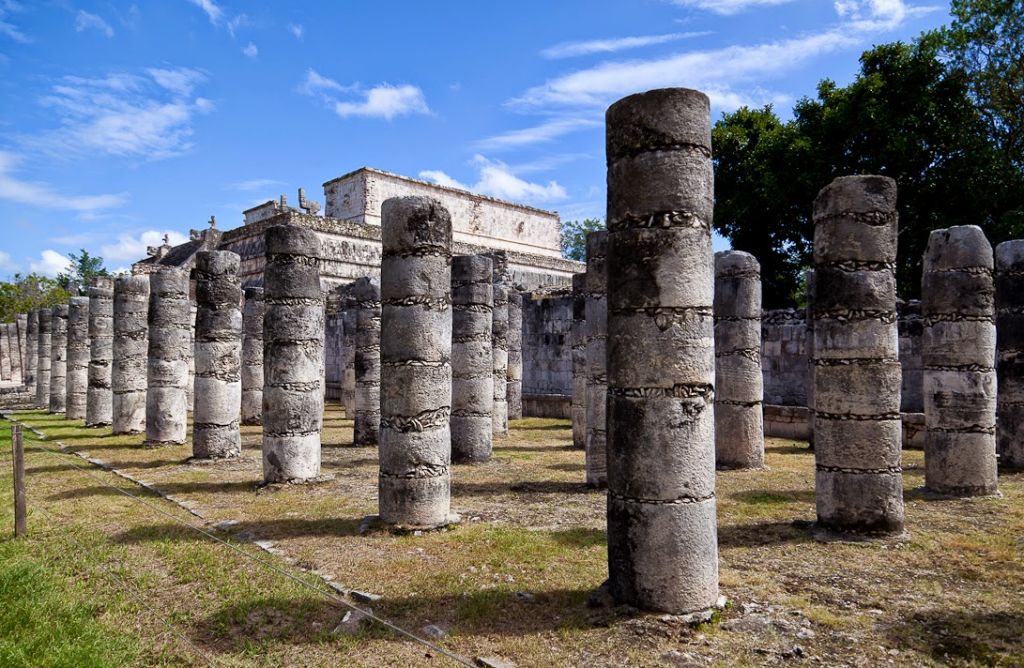 Karakol – an observatory with a round dome – looks just as impressive. 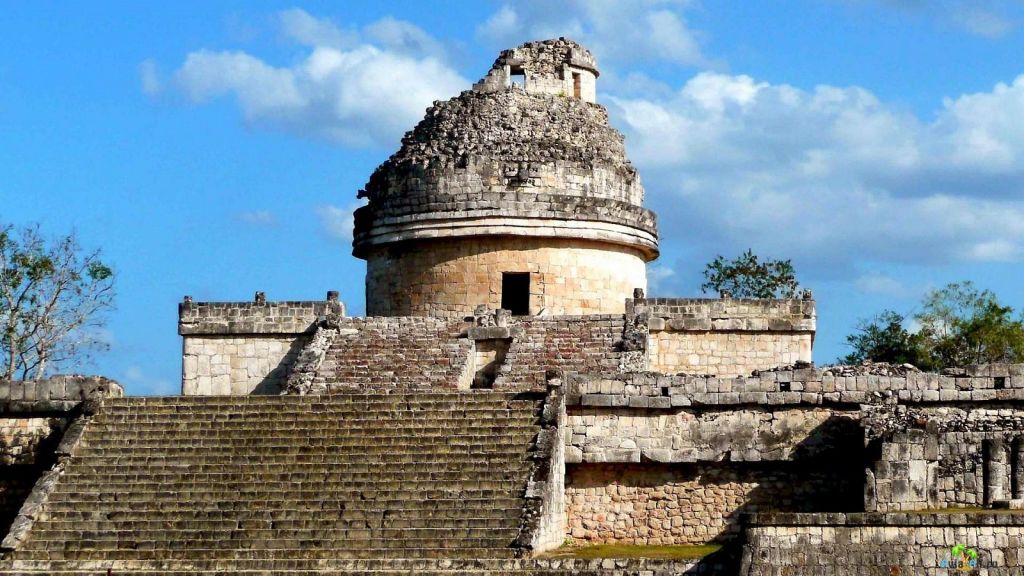 Ancient bas-reliefs and frescoes depicting the history of Mayan tribes, their religion and domestic life, still remain on the walls of many buildings.

The Sacred cenote is located in the northern part of the complex. From above it looks like a giant funnel 60m in diameter filled with green water. The tribes living in the city believed that this well was home of the rain god – Chaahk. During the drought, tribesmen would offer sacrifices to Chaahk: they would throw jewelry, gold, kitchen utensils, animals, and sometimes even people (archaeological excavations unraveled human bones at the bottom of the cenote, among other things).

Chichen-Itza is one of the most visited landmarks in Mexico, so there are always plenty of tourists here. But as the day comes to an end, the crowds of visitors slowly disperse. We stayed at the complex almost until closing time, when almost all the visitors had already gone. This gave us the opportunity to study the facilities in silence, with no rush, and the boys could play freely on the large grounds that were built a few hundred years ago.

By the way, all the facilities were open to visitors until 2006. Tourists were allowed to climb the pyramid and even view the inner rooms. But, sadly, the never-ending flow of people with a desire to literally get in touch with this ancient culture endangered the complex: the old building began to crumble. Nowadays the facilities can only be viewed from outside.

There are a few dozen cenotes of various size and type just outside Valladolid. And most of them are suitable for swimming. 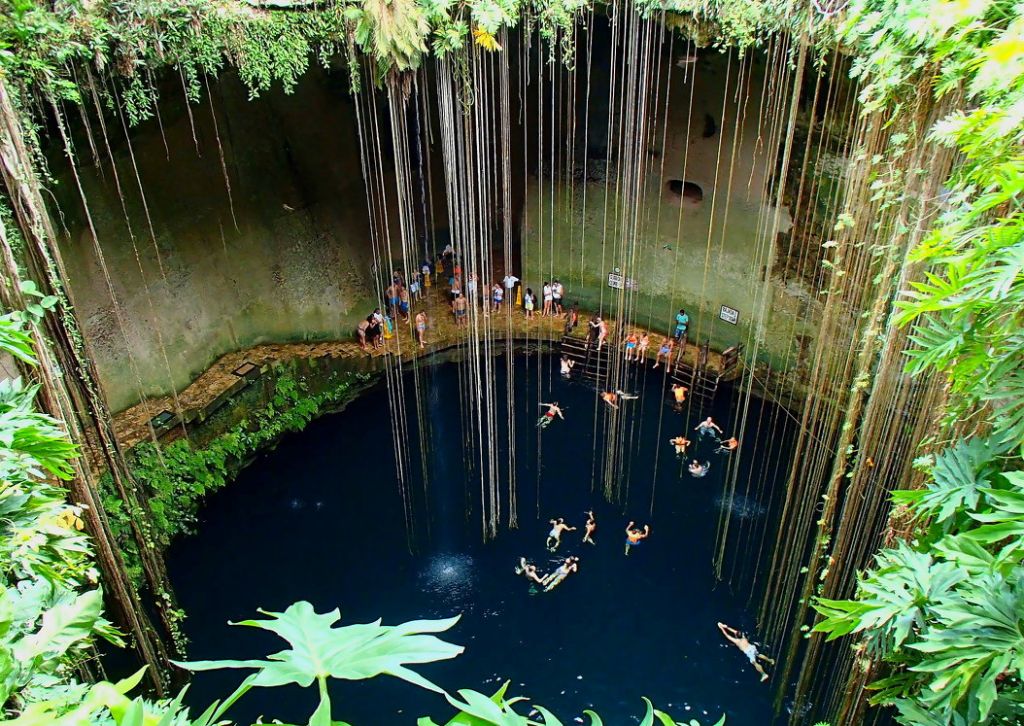 Perhaps, the most famous cenote is Ik Kil. In fact, the image of Ik Kil is often the one printed on post cards and covers of tourist booklets. There was a time when the cave roof had completely collapsed, leaving a deep opening, through which the light now enters the cenote.  If you want to go down to the emerald green waters, you have to first walk down the stone steps. 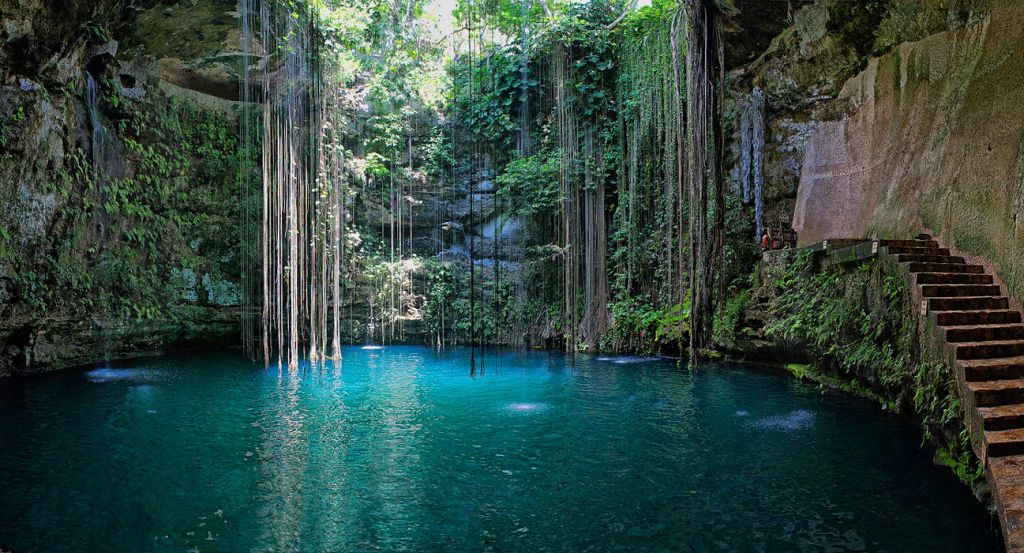 Limestone cave walls are overgrown with moss and lianas, while thin, long roots hang down from the holes in the “ceiling”, making the cave look out of this world.

Located 6km from Valladolid, Cenote Dzitnup is a peculiar place. Carved through the cliff, narrow passages lead the way down to a well with cool, clean water.

It’s a closed cenote, so the light enters only through a small crack in the cave’s “ceiling”, creating a mysterious – mystical, even! – atmosphere.

Colonies of bats thrive amid the quaint stalactites in the dusk of the underground grottos, with thousands of tiny fish swimming in the waters.

Another nearby cenote is Cenote Samula. This well is also hidden inside a cave, illuminated only by a single light beam. Fantastical designs on the cave walls resemble solidified lava, while the crystal clear water has an unusual bright-blue color.

Though not as famous as the others, Cenote Samaal is a very beautiful place. This open well with clean, cool water is equipped with a wooden stairwell. What is incredible about this particular cenote, is its own little waterfall – the water hitting the well look astonishing.

Around 30km from Valladolid lie the ruins of another Mayan city – Ek Balam. Its name, which translates as “Black Jaguar”, originates from the animal-god that, according to the legend, founded this settlement. 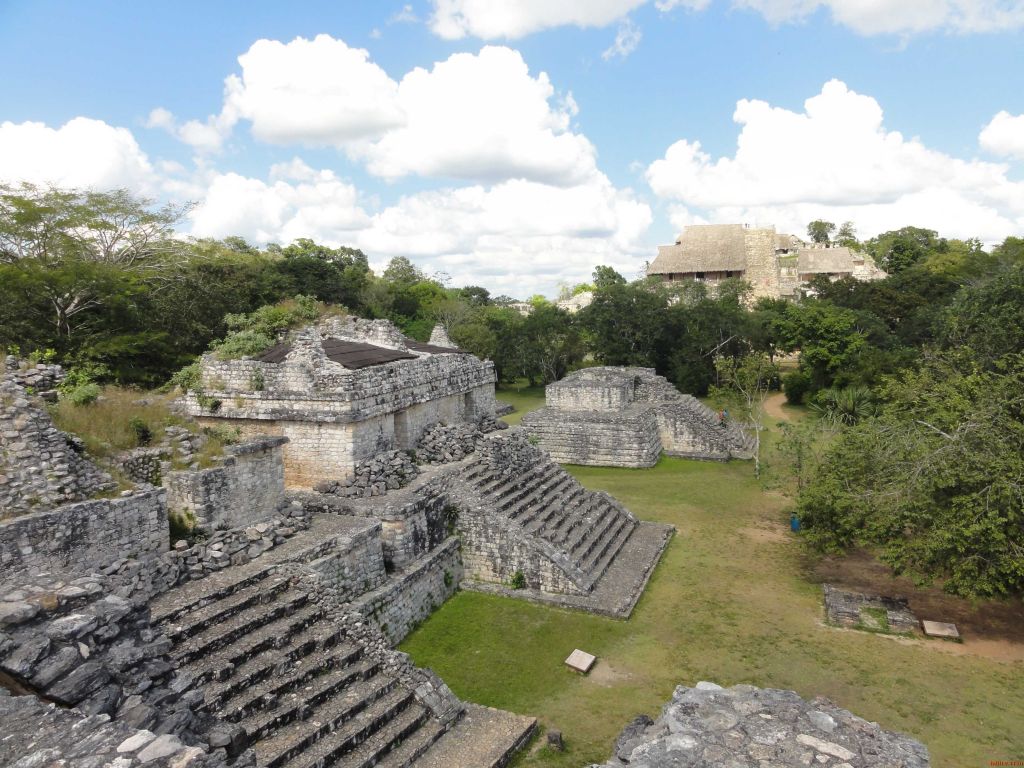 The first tribes migrated here back in the 3rd Century BC. Located in the heart of the jungle, the settlement was hidden away from potential enemies. The city expanded and gradually become the capital of the entire province.

Ek Balam declined in the 10th Century. According to historical records, its residents simply abandoned it, preferring to relocate to a more promising city – Chichen-Itza. A few centuries later the empty city was conquered and partially destroyed by Spaniards. Nature did the rest – the buildings sank deeper into the ground and were overgrown with more lianas every year.

Ek Balam isn’t as famous as the other Mayan cities in the area. The first excavations here didn’t start until 1980, and they’re still ongoing – the majority of the facilities are still underground or hidden in the impassable jungle thickets. This is why there are fewer tourists here; but this is even better – a place like this gives you the opportunity to feel the mysterious atmosphere of the ancient civilization. 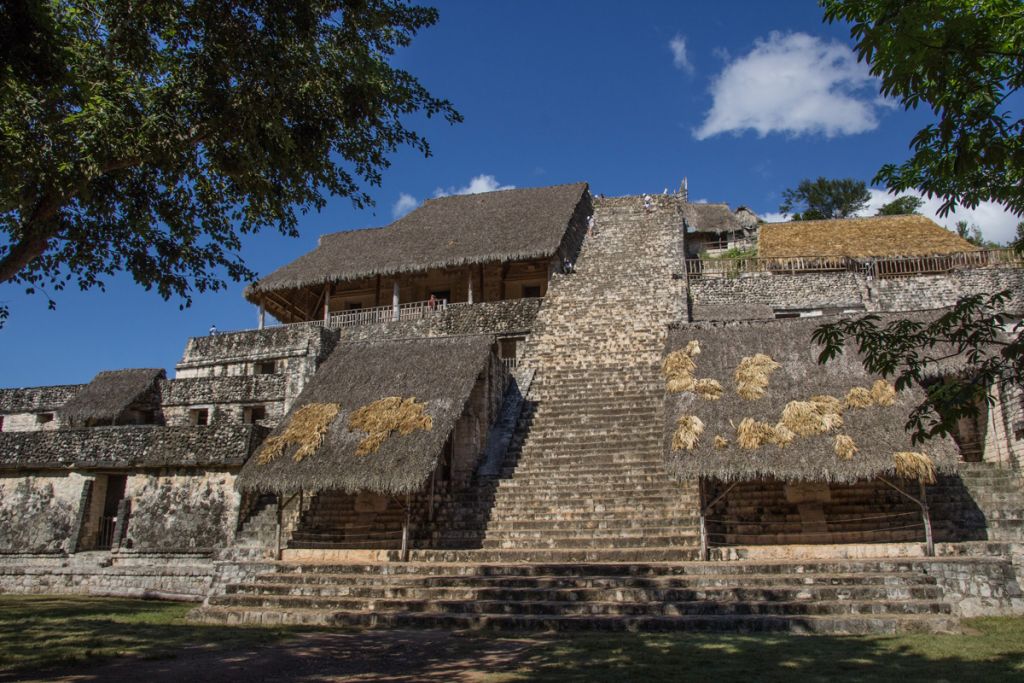 The most famous building in this complex is the Acropolis – a 30m tall building with a pyramid-shaped top. The top-floor entrance looks like an animal’s open mouth with large teeth. Until just before the 2nd millenium, it served as the burial vault of a local ruler – Ukit Kan Lek Tok. Before leaving Ek Balam, the residents filled the Acropolis with soil, which helped the frescoes and bas-reliefs, lavishly decorating the building walls, remain preserved to this day. 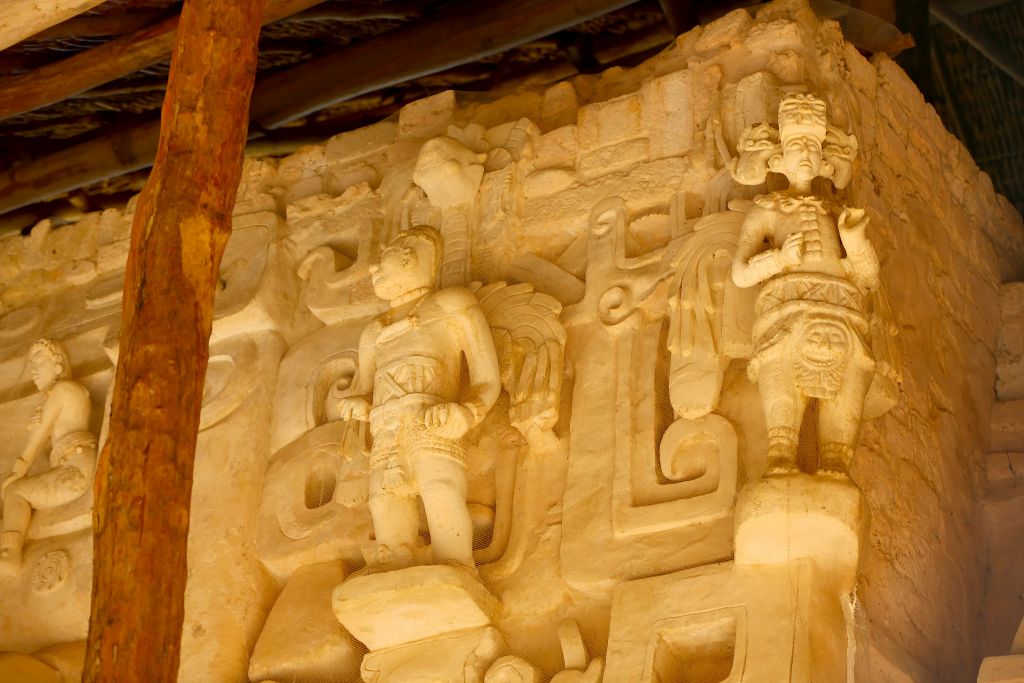 The city was surrounded by fortress walls from three sides, parts of which can still be seen today. The Oval palace is also well-preserved. It’s believed that the Mayan priests used it as an observatory. 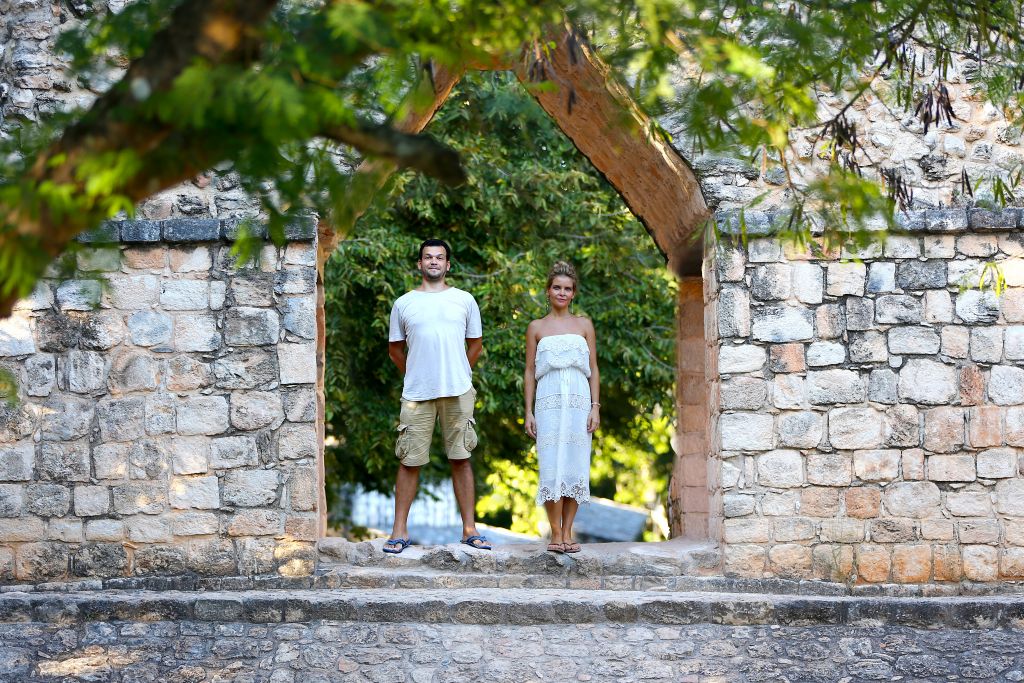