Souvlaki is a kebab from small pieces of meat (pork or chicken) that are, as a rule, cooked and served on wooden skewers. Souvlaki is one of the most popular traditional Cypriot recipes, and it can be tasted literally everywhere – from fast-food stalls to luxury fashionable restaurants. 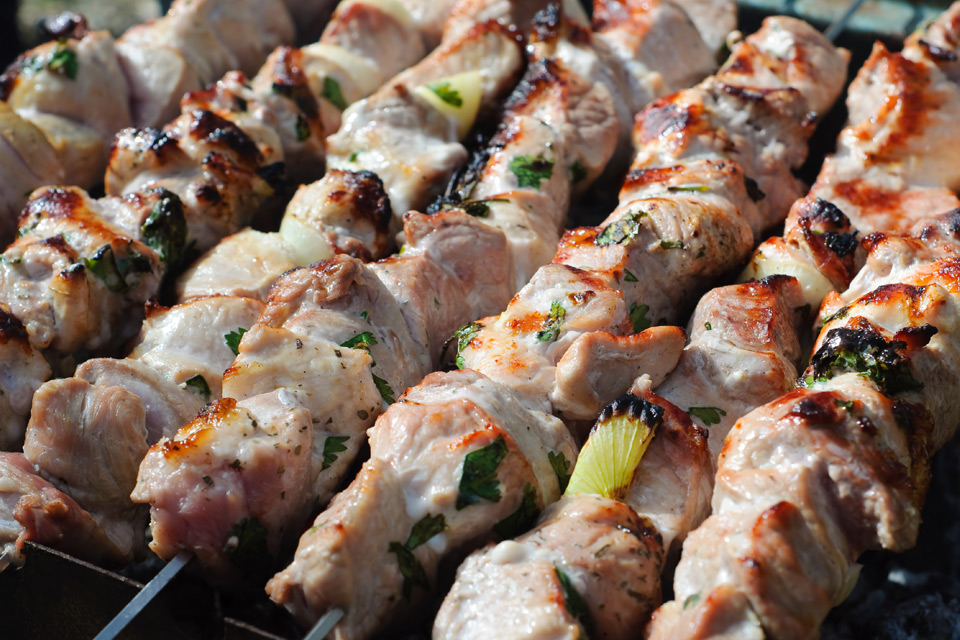 The type of a kebab that is much less common is souvla. While souvlaki is prepared from small pieces of pork or poultry, souvla is cooked from huge lamb chunks that are the size of a man’s fist. The pieces on the bone covered with a thin layer of fat are usually taken to prepare the dish. The fat melts first and creates sort of a bag in which the meat is steamed. After the fat is completely gone, the half-ready steamed meat is roasted on the outside. As a result, you get a kind of roasted ’n’ steamed meat that is inexpressibly delicious. 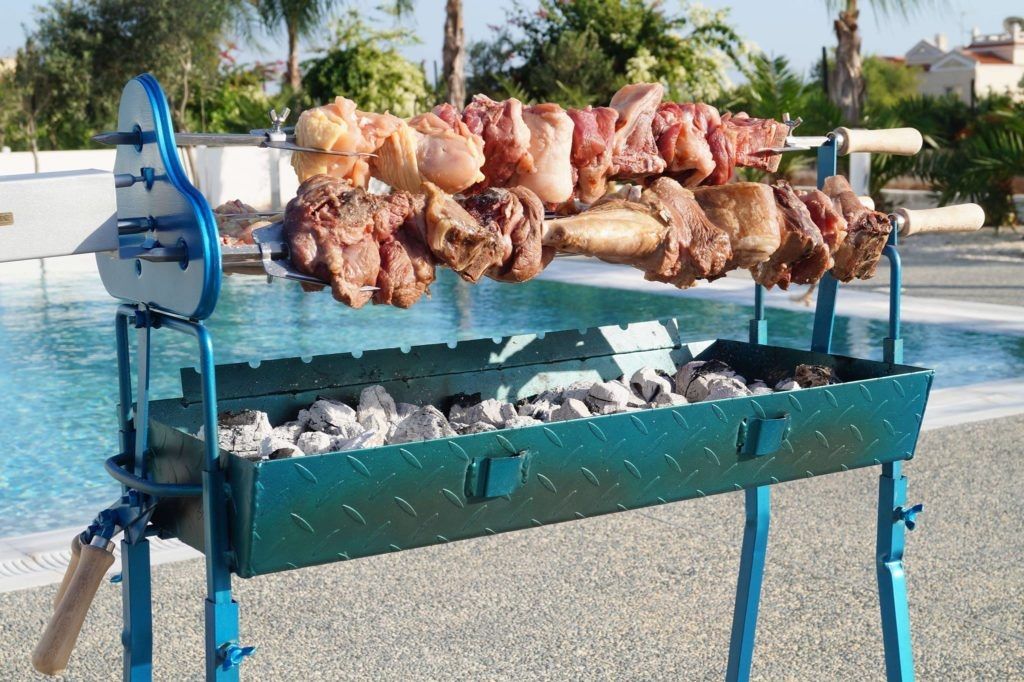 Souvla is rarely prepared in Cyprus, because it’s rather long and complicated to cook such meat. The dish is most often made and eaten on the weekend when families come together. For example, it’s often present at traditional family picnics in the open air that we told you about in one of our articles about the Troodos Mountains. 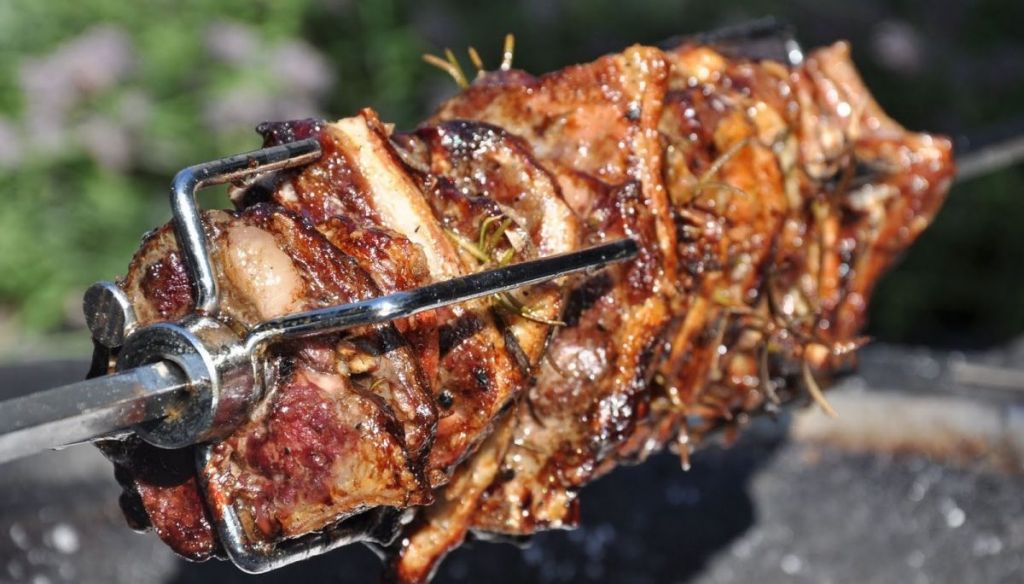 Besides souvlaki, there’s one more type of fast and tasty meat food in Cyprus – sheftalia. It’s meatballs from ground pork or ground pork with ground lamb seasoned with spices. The mix of ground meat and herbs is wrapped in caul fat – just like meat fillings are wrapped in cabbage leaves to make cabbage rolls – and grilled or charcoaled on skewers. It’s a popular and easy-to-cook dish. 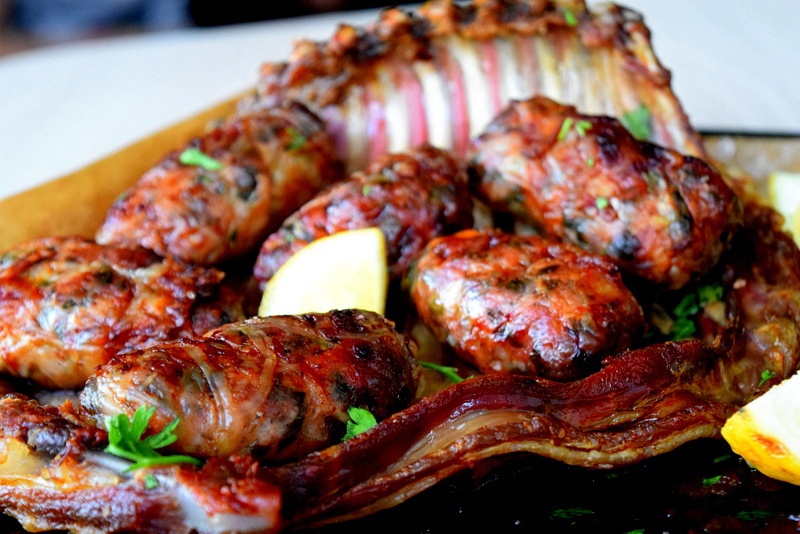 Many shops sell convenience sheftalia that only needs to be roasted, which is very convenient if you go on a picnic, for instance. Traditional sheftalia can be found almost in all restaurants. The restaurants and cafes also often offer a mix of souvlaki and sheftalia with a vegetable side dish.

Dolmades is a recipe rooted in Turkish cuisine. It’s meat rolled in vine leaves. Simply put, it’s dolma, that is ground meat with rice wrapped in vine leaves prepared in a special way. 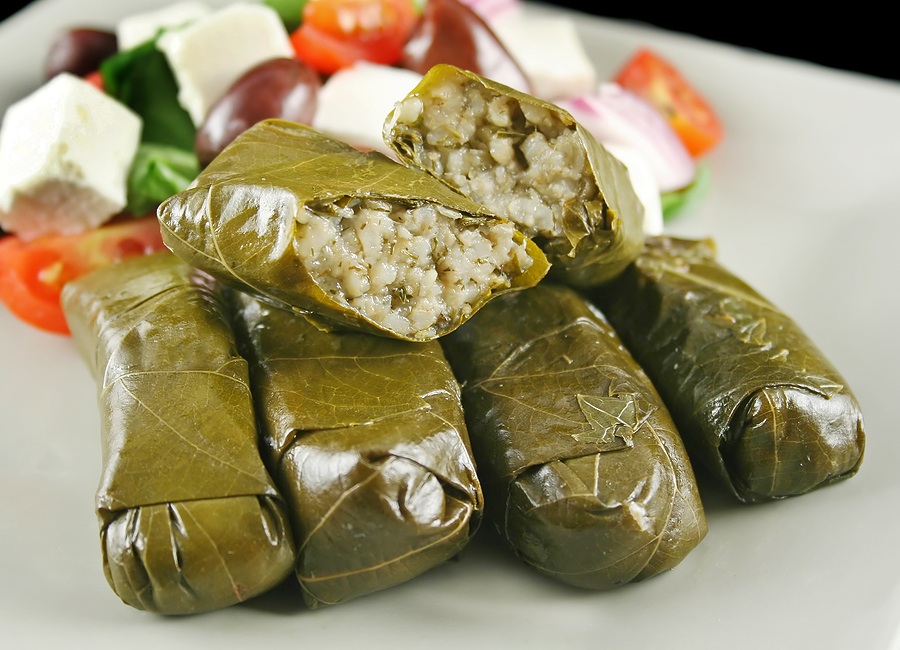 There are also a vegetarian variant of the dish, where ground meat is replaced with ground vegetables, and fish dolmades, where ground fish or just pieces of fish are wrapped in leaves.

The Cypriot dainty that most tourists will find quite peculiar is kefalakia. It’s a lamb’s head seasoned with sauce and baked. It’s certainly tasty but not everyone will dare to try the dish as heads are served as they are, that is with eyes, carefully laid on a side dish, e.g. pilaf.

Pilaf is crushed wheat (bulgur) mixed with fine vermicelli and spices. Cypriots love pilaf and are good at cooking it. It’s usually used as a side dish for meat dishes. We’d recommend trying it with sheep’s milk yogurt. 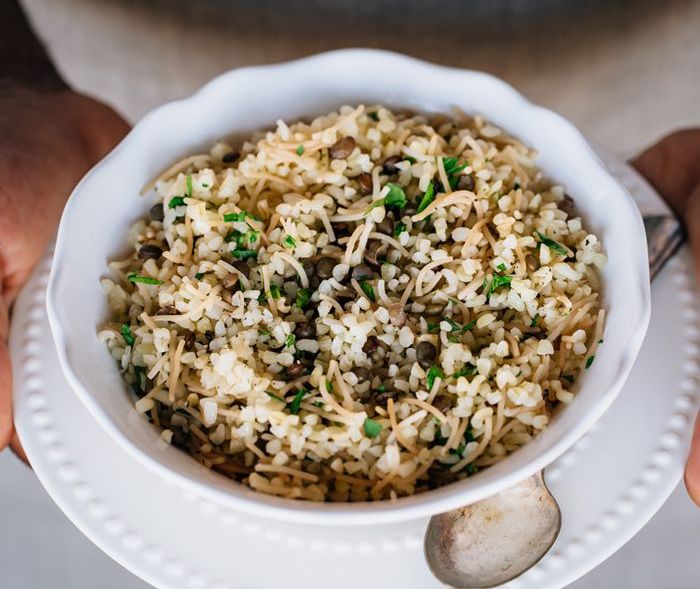 As we’ve already mentioned, fish is less popular among Cypriots than meat. It’s because fishing is not done along the whole coastline of the island, but concentrated only in several towns. Furthermore, the waters of Cyprus are not particularly rich in fish. The mountain areas of the island have lots of fish farms where trout and other freshwater fish are raised. The trout delivered to the riverside restaurants mostly originate from there. It’s always fresh and extremely tasty, but quite pricey. However, if you want to try really delicious trout, you’d better go to specialized fish taverns or restaurants. There are few of them on the island, and they are usually situated in the area where fish are raised and caught.

Seafood such as squid or octopus is very popular in Cyprus. There are myriads of octopuses here, and they can be caught right from the sea. They are usually cut into pieces, grilled, and served with a vegetable side dish and unleavened bread. 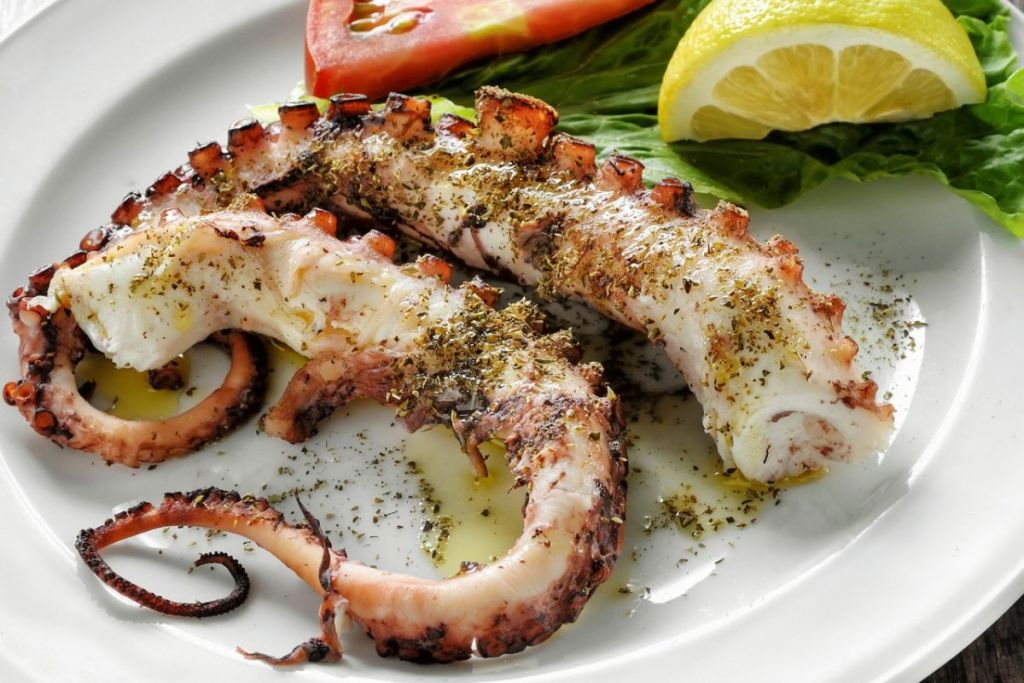 Lemon always serves as the main spice for the dish. Lemon is generally a universal product in Cyprus. It’s added to both fish and meat dishes. Many tourists visiting the island for the first time are truly surprised by that as lemon juice is used to season almost any food here just like Americans love adding ketchup to most dishes.

Moussaka is a Greek dish that is one of the favourite ones among Cypriots. The ingredients – eggplant, tomatoes, minced meat, and potato – are layered and generously seasoned with béchamel sauce after which the dish is baked. 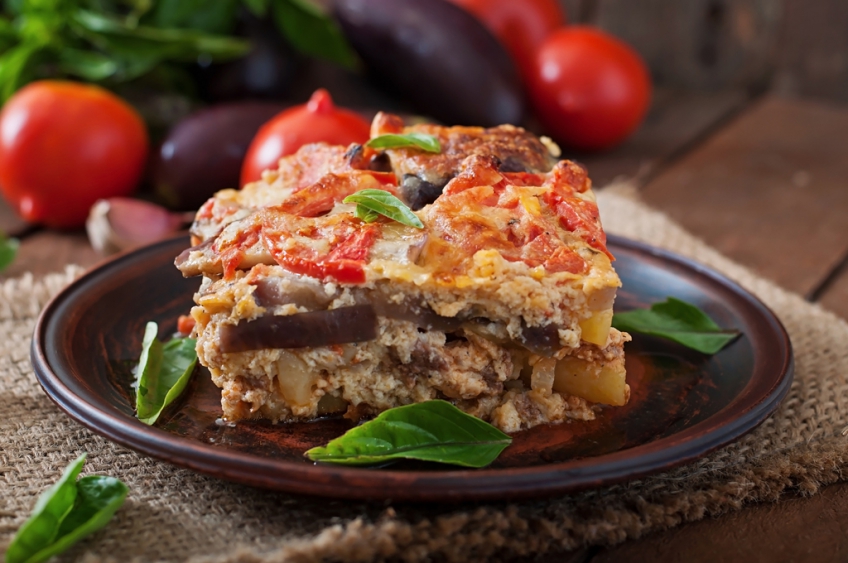 Moussaka may also include macaroni or be cooked without meat. You can play with it the way you like as the dish just can’t turn out to be not delicious.

Briam is a Cypriot, or rather Greek, variation of the popular vegetable dish called ratatouille. The vegetables – zucchini, eggplant, okra, potato, sweet peppers, tomatoes – are diced up and baked after being generously seasoned with olive oil, herbs, and garlic. The zing of the dish is feta that the dish is covered with. The cheese sprinkled with olive oil forms a golden brown crust over the vegetable mix. As a result, you get a very appetizing, tasty, and savoury casserole. 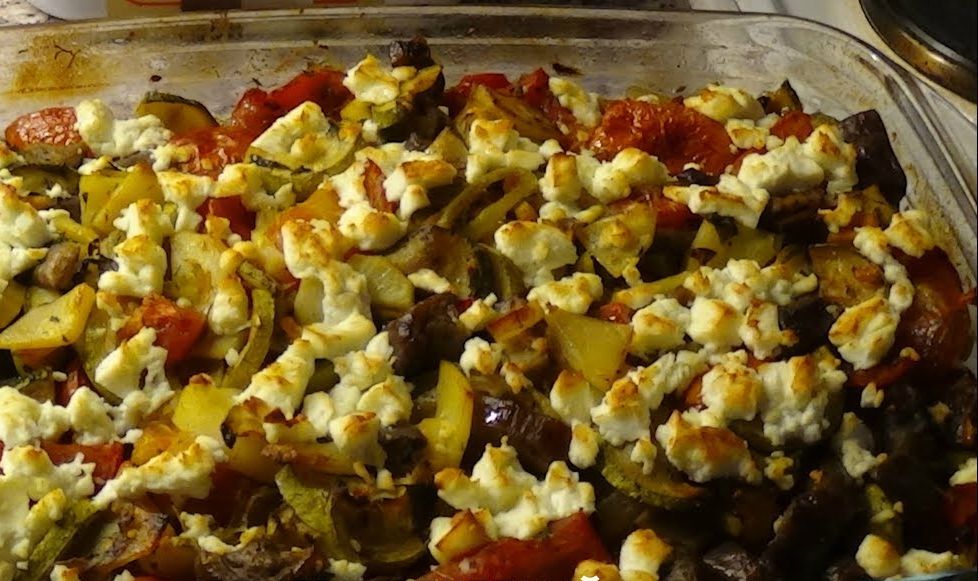 Briam is usually served as the main dish, but it can also be a great side dish complementing meat dishes.

A traditional Cypriot dish from meat and vegetables is called tavas. Both lamb and pork can be used to prepare it. Veal is also used, but rarely. Meat and vegetables (onions, potato, carrots, tomatoes) are baked in pots and served in the pots as well. 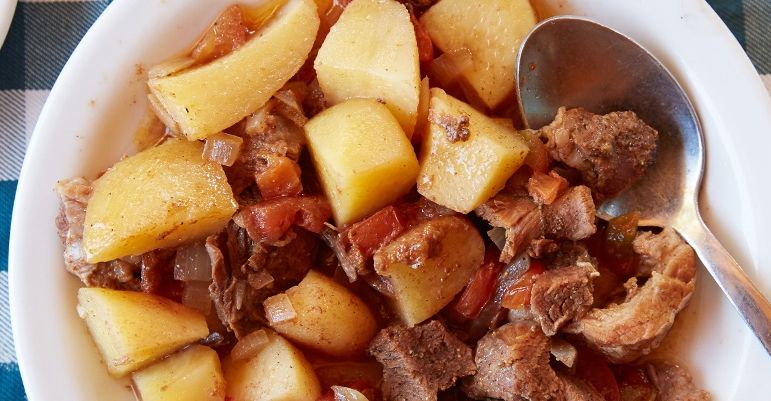 A unique mix of herbs makes tavas special. Apart from salt and pepper, cinnamon and caraway are added which provides the dish with a very interesting distinctive aroma.

One of the main snacks in Cyprus is surely olives that are grown in great amounts here.

There’s a great variety of different recipes from which two major ones can be singled out: black olives in plain brine and green crushed olives. The preparation according to the second recipe looks like that: green olives that are not fully ripe are taken, crushed, and soaked in water. Water absorbs bitterness of fruits. After that, olives are soaked in the marinade from garlic, coriander, lemon, and olive oil. It’s a very tasty and aromatic snack that olive lovers will find really delicious. 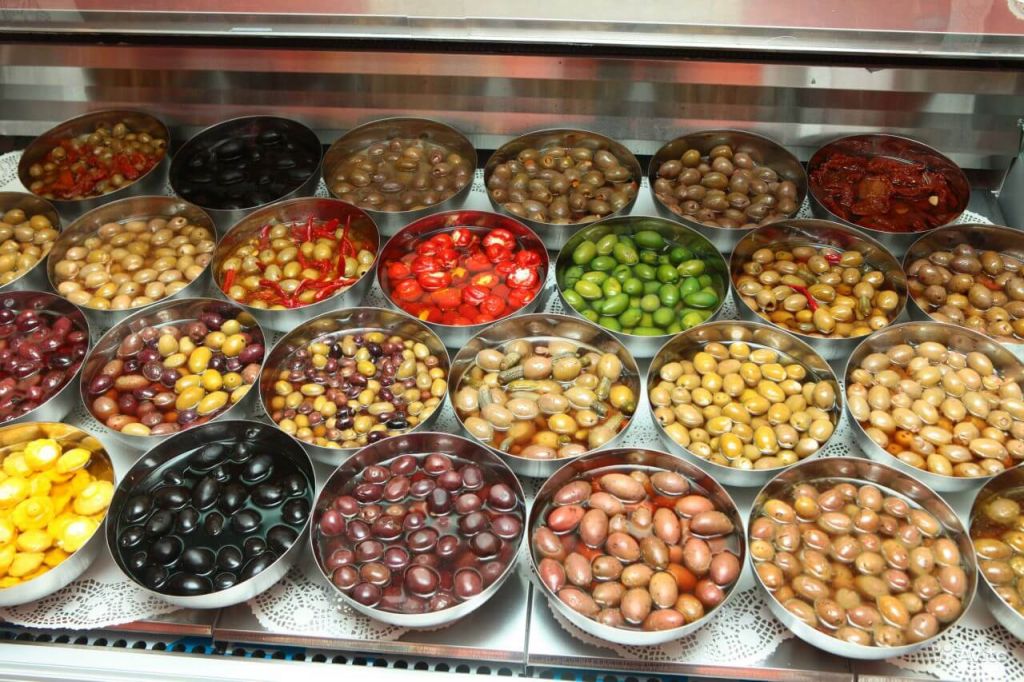 There are many other recipes of cooking olives in Cyprus. They can even be just baked in foil and served hot, but the two above-mentioned recipes are perhaps the most widespread.

There are lots of people who prefer Cypriot olives to Spanish and Greek ones because they are prepared according to the recipes letting you keep the taste and aroma as well as the juicy fleshy pulp of the fruits to the maximum.

The island residents love various appetizers such as mash or sauce very much. For example, hummus or tahini. Hummus is less popular while tahini is cooked much more frequently. The recipe of tahini came here from the Middle East. It’s mash made from sesame seeds, olive oil, lemon juice, and spices. 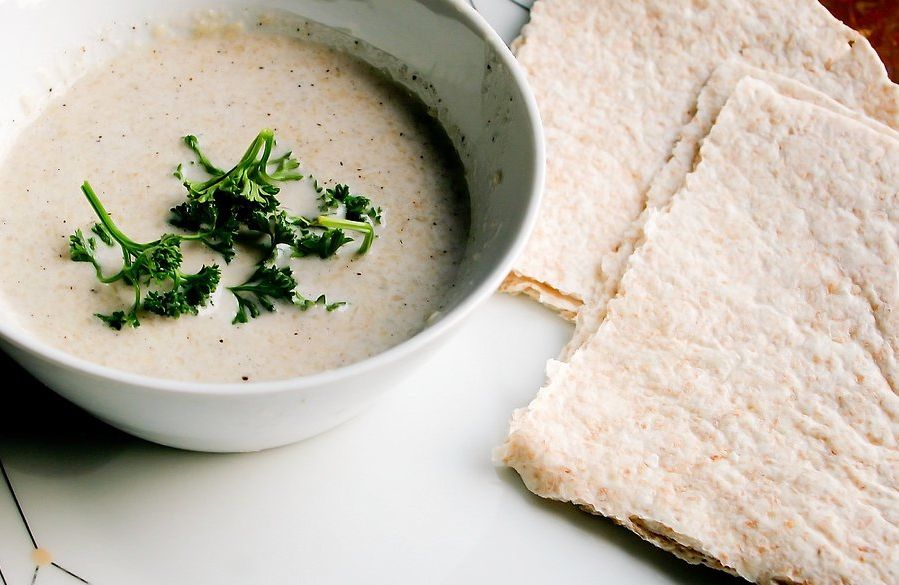 One of the dishes that Cypriots enjoy cooking is taramasalata. It’s ground roe of cod mixed with olive oil and lemon. Taramasalata is pale pink paste usually served with bread (you can spread it on a slice of bread or even just dip bread into the sauce). 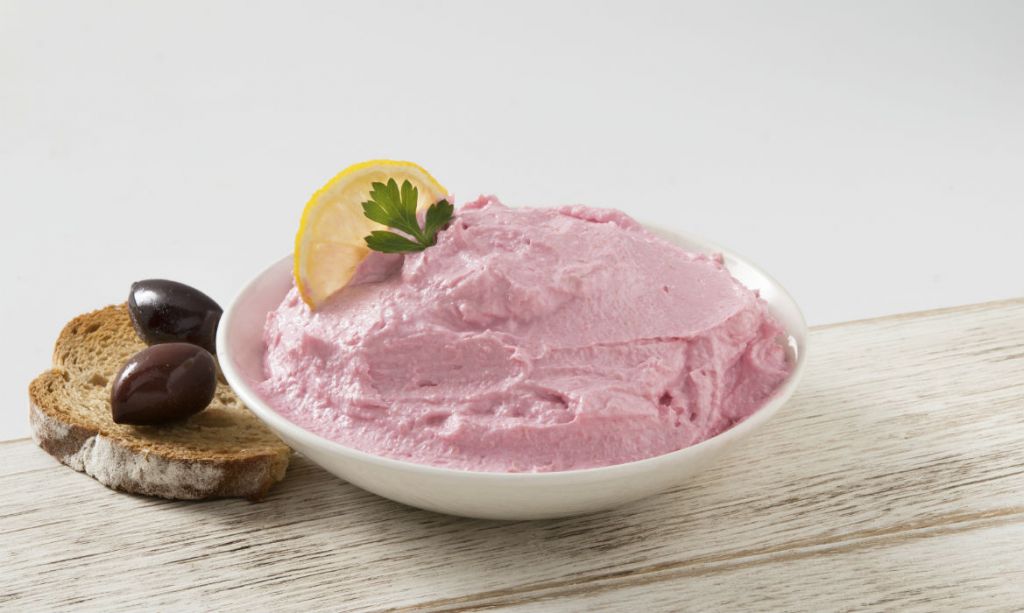 Another popular appetizer is melitzanosalata made from roasted eggplants.

The Greek spicy cheese sauce appetizer called tirokafteri has become quite popular in Cyprus lately. It’s prepared from feta mixed with oil, spices and certainly spicy green peppers that are the ones that give the dish an interesting spicy flavour. 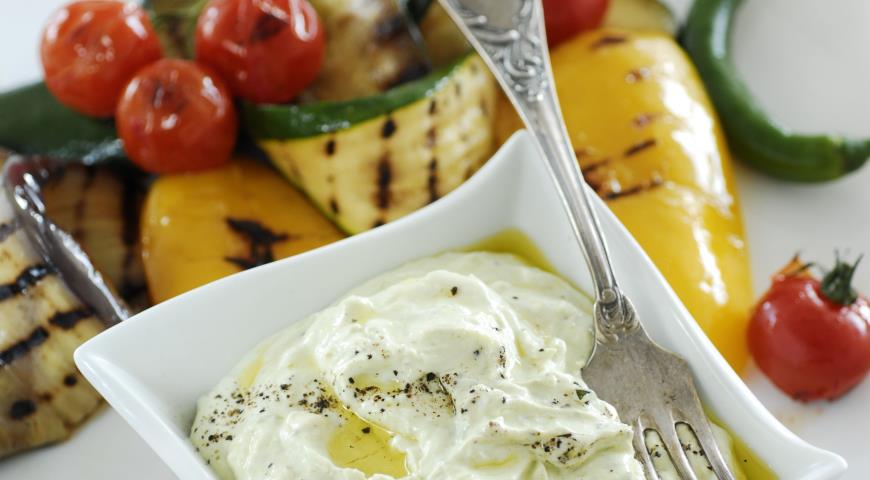 Tzatziki, a traditional Greek sauce made from yogurt, garlic, and cucumbers, is present almost at any dinner – be it celebratory or casual. 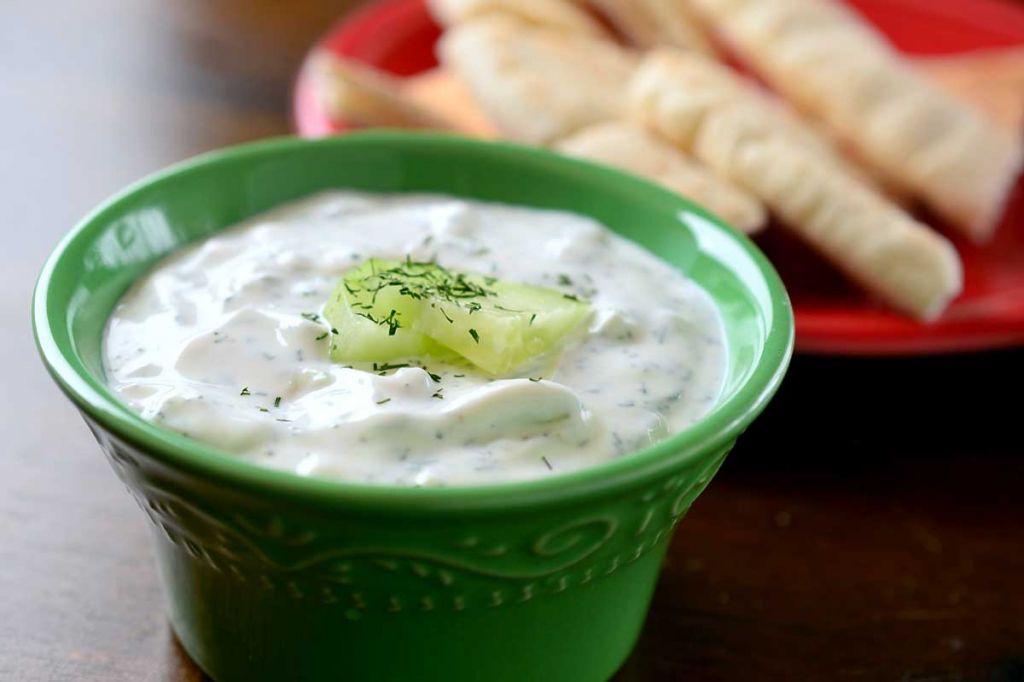 Yogurt is generally an indispensable part of the Cypriot culinary culture. It’s used to season vegetable salads and is a major ingredient of many dishes and sauces. It’s impossible to imagine a traditional Cypriot meal of any kind without yogurt.

Locals prefer yogurt from sheep’s or goat’s milk that is called “village yogurt”. It’s thick, very tasty and has a characteristic smell of fresh milk. Ordinary yogurt from cow’s milk is also used, and it’s well prepared in Cyprus both in private households and industrially.

In the following publication: Meze – a set of all the most delicious, Easter cakes and Cypriot strong drinks.