Almost all appetizers and sauces as well as the whole range of dishes of Cypriot cuisine are easy to taste all at once. You just need to go to a restaurant that offers good meze, a selection of small helpings of various dishes. “Good” meze is the one that consists of at least 20 dishes.

Meze is served in several courses. First, appetizers, sauces, and salads are served together with fresh aromatic bread. Then more “serious” dishes are served – fried halloumi cheese and local sausages (loukaniko). Last of all, meat dishes are brought – souvlaki (or, if you are lucky, souvla that is rarely seen in the menu of restaurants), kleftiko, afelia, sheftalia… that is the dishes that are proudly called traditional Cypriot food. 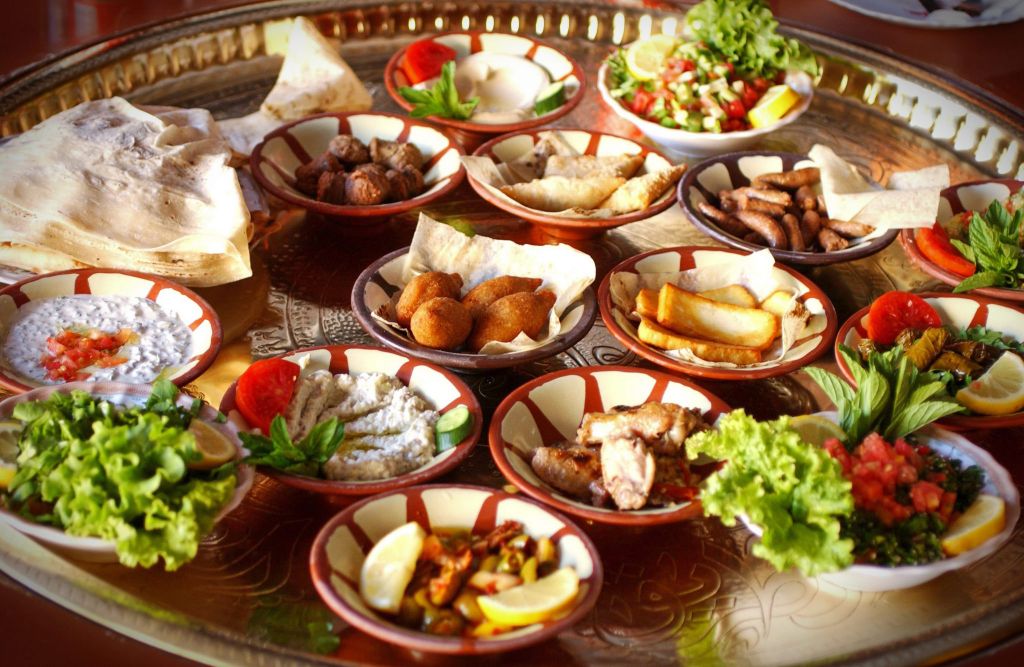 You can order fish meze instead of meat one. Then you will be served various dishes from fresh fish and seafood.

If you are interested in some certain dish that is not often cooked, – e.g. souvla or kleftiko – you can ask whether it’s included in the meze and is available at the moment before making an order.

Cypriot desserts include a great variety of dainties that originate from Arab, Turkish, and European cuisine.

Baklava is a good way to start talking about confection. There are a lot of types of it. It can be cooked as rolls or turnovers from sugared puff pastry. Crushed nuts with sugar and cinnamon are usually used as a filling. 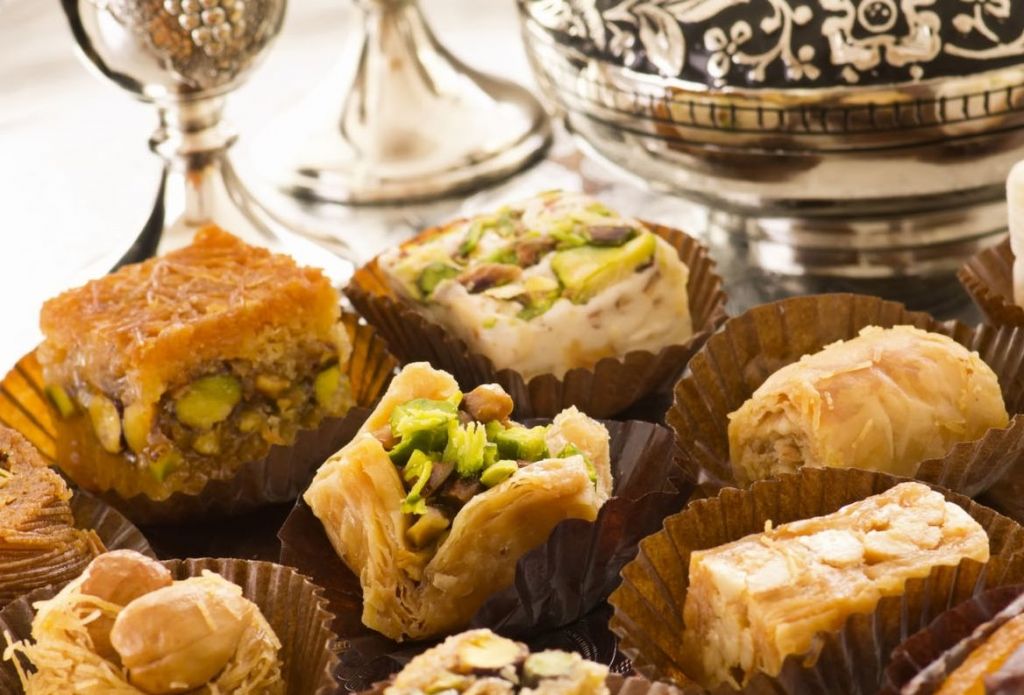 Another interesting treat that is rather rare in the cuisines of other countries is sugared walnuts. A whole nut that is young, green and has no shell and stone yet is taken and sugared. As a result, you get an extremely tasty snack.

Cypriots generally love sugaring different things – from berries and fruit to vegetables. Even zucchini and eggplants are soaked in sugar syrup, but the dainty is surely not to everyone’s taste. The peel of citrus fruits, of which there are many in Cyprus, is not thrown away but used for making a kind of succade. However, it’s not dried but served right in the syrup.

Lokum is a fruit or berry jelly covered in powdered sugar. It’s a famous Arab dessert that is very popular in Cyprus. 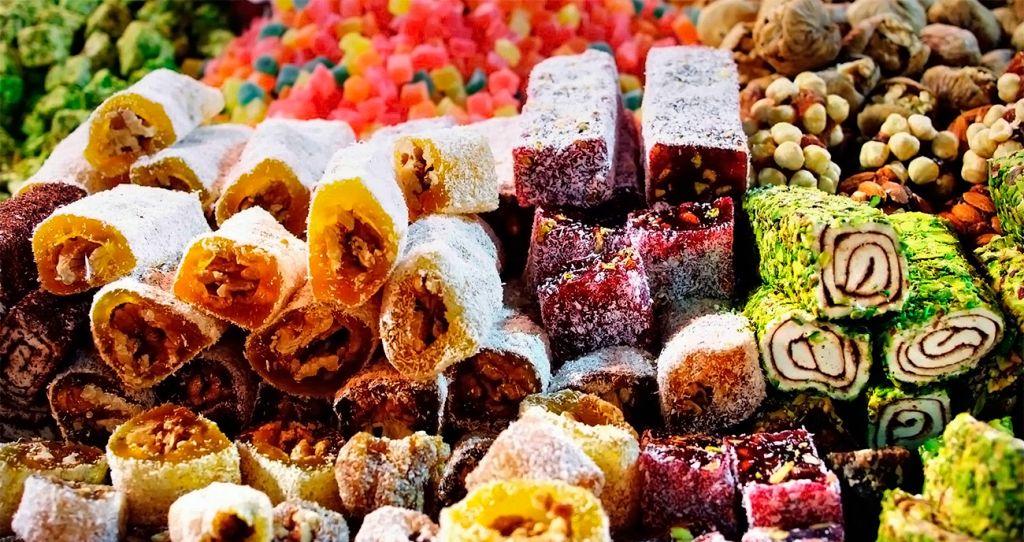 There’s one more special type of food that Cypriots love very much. It’s loukoumades (despite the similar name, it has nothing to do with lokum!). Loukoumades are small doughnuts. To cook them, pieces of dough are put into boiling syrup in which they are fried and inflate a bit turning into balls. While eating, people usually impale loukoumades with a skewer. When served, they are sprinkled with powdered sugar or chocolate crumbs and poured with honey or syrup. It’s very sweet, very hearty, and very delicious. 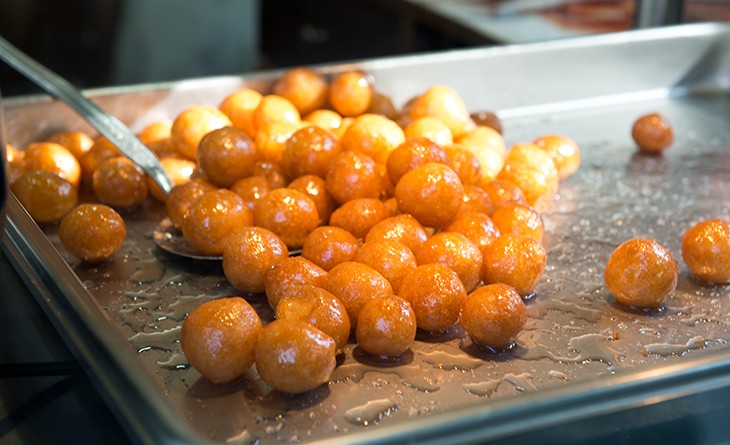 A fruit sweet dainty called soutzoukos is also very popular among Cypriots. Walnuts or almonds are strung onto a thread and immersed in thick syrup cooked from grape or pomegranate juice, sugar, and flour. The thread with nuts is lowered there and taken out, then lowered and taken out again, and the action is repeated many times. The syrup congeals quickly, more and more layers build up, and, in the end, you get a very tasty thing. In Georgia and other Caucasian countries, it’s known as churchkhela.

The production of soutzoukos is widespread in Cyprus, so they can be found in all shops. Curiously, despite the seemingly same recipe, soutzoukos always taste differently in different parts of the island! 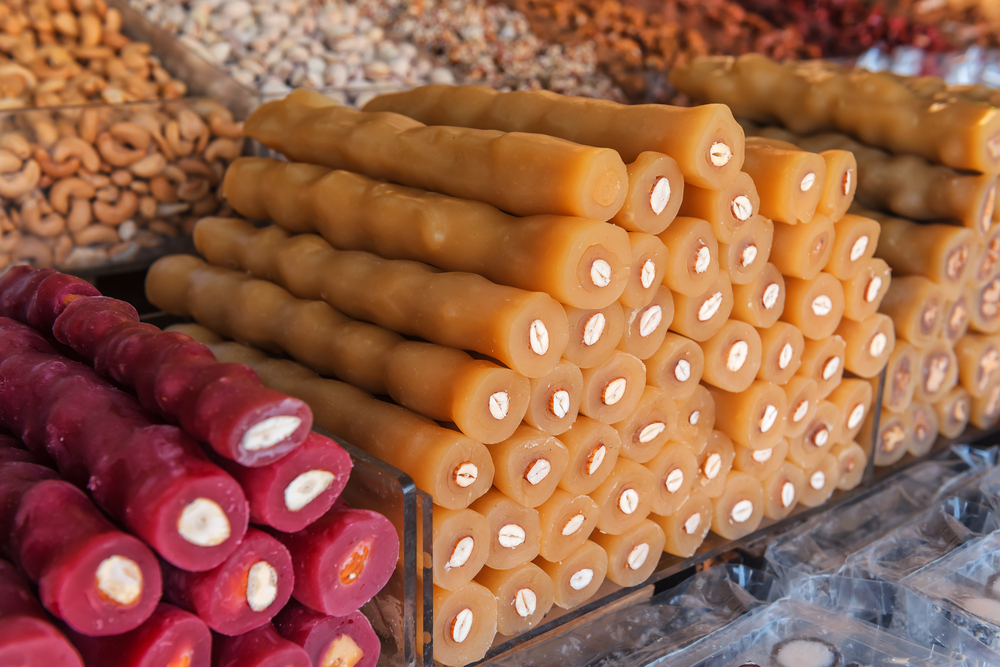 Soutzoukos is one of the major treats present at all fairs, markets, and on waterfronts. No celebration or event can do without a couple of stands with soutzoukos from different regions. And you can safely buy them everywhere, as they are always fresh and incredibly delicious.

We can’t help mentioning seasonal desserts as well. For example, it’s common to cook certain dainties for Christmas – pies and other pastries. A Christmas cake is usually cooked according to the old English recipe. It’s a flavourful mix from sweet dough, succade, and dried fruit. 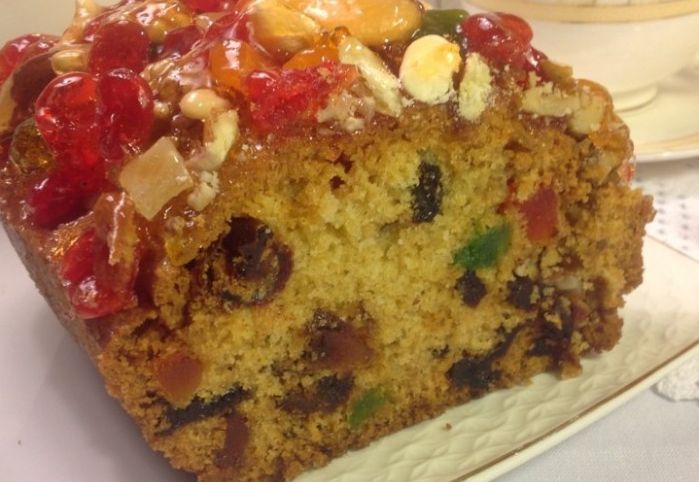 An interesting feature of the cake is that it needs to be soaked – the longer, the better. The cake is baked at least a week before Christmas, then kept in the fridge covered in foil and generously poured with syrup every day for soaking. The recipe of the syrup depends on personal tastes and preferences. It may be either a honey solution or a mixture of orange juice and cognac. After several days of the efforts, the cake gets so juicy, very calorific, and fabulously delicious.

The main Easter treat that can be found in any shop and that all families have as part of a festive meal is flaouna (flaounes). It’s a pastry with various fillings. A classic filling is a special hard cheese called flaouna sold in shops before Easter. Flaounes are a traditional pastry for Cypriots, just like simnel cake is commonly cooked in the UK, while no Easter in Eastern Europe can dispense with kulich.

There are a lot of recipes of flaounes. It can be salty or sweet. Raisins and mint can be added to it. If you wish to give flaounes an interesting unusual aroma, you can use special spices – ground cherry stones and powder from dried resin of a pistachio tree.

To get perfect flaounes, you should bake them in a traditional Cypriot wood-burning stove thanks to which the pastry absorbs a distinctive smoky aroma.  Flaounes is a unique recipe that is present only in Cypriot cuisine.

Now beverages! The first drink that we’d like to pay your attention to is lemonade. Classic lemonade is very popular in Cyprus and is made by almost all Cypriots. Lemon juice is mixed with sugar with a ratio of 1:1. Such a mix can be kept in the fridge for long. Before drinking, it’s diluted with water – plain or carbonated one – to your liking. As a result, there’s a delicious, healthy, and very refreshing drink. 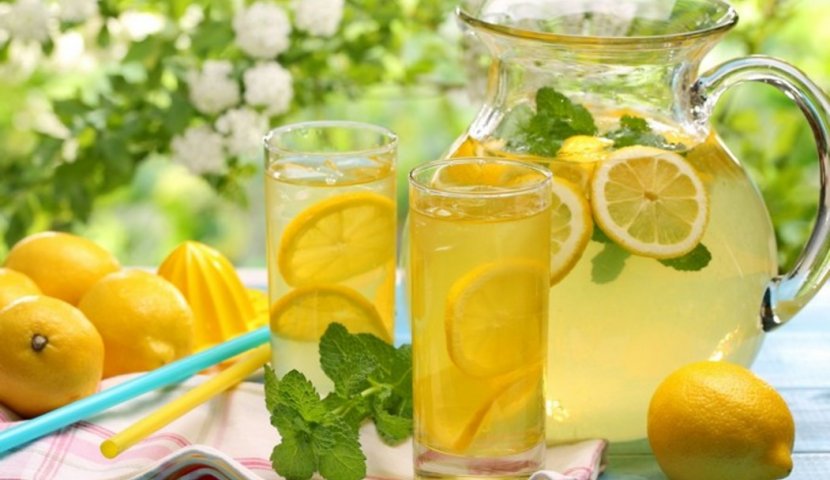 As for alcoholic drinks, wine is most popular in Cyprus. The island has a very rich history of winemaking. It’s a separate ancient culture. Some say that Cyprus was the first country in the Mediterranean to start making wine.

One of the popular grape varieties used for wine in Cyprus is Xynisteri. Dry white wine and lots of other drinks are made from it. Another trademark is Commandaria. It’s sweet wine with a distinctive flavour resembling Cahors. The locals rarely drink it, but foreigners just love it and usually bring Commandaria home as a Cypriot souvenir because the island is the only place where the wine is produced. 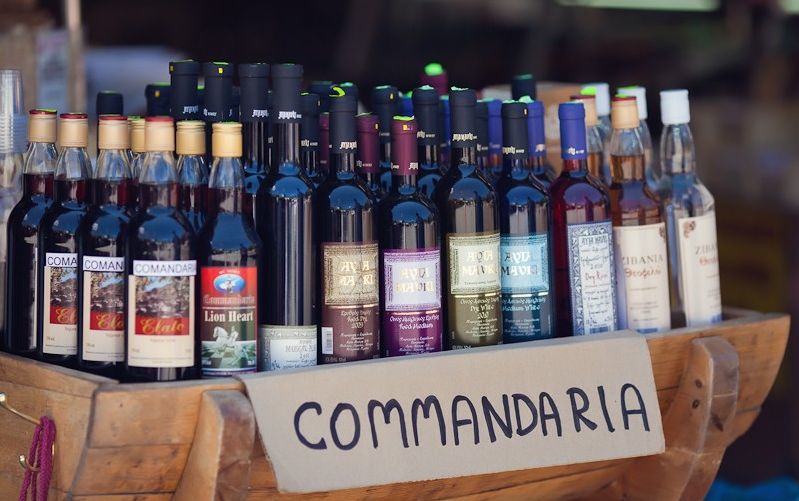 Commandaria has been made since the 12th century when the island was governed by the Templars. They earned huge amounts of money from the winemaking as the recipe turned out to be good and the wine quickly became popular in England and Europe.

Switching to other alcoholic drinks, there’s a famous Cypriot brandy called zivania – the stress is on the penultimate syllable. The beverage is produced according to a special technique. As a rule, it’s made from pomace left over from winemaking. Classic zivania should be made from either Xynisteri or Mavro grapes. The alcohol content may vary from 43 to 49%. We’ve seen the latter only in the shop of Kykkos Monastery, though, where extremely quality alcoholic drinks are produced. 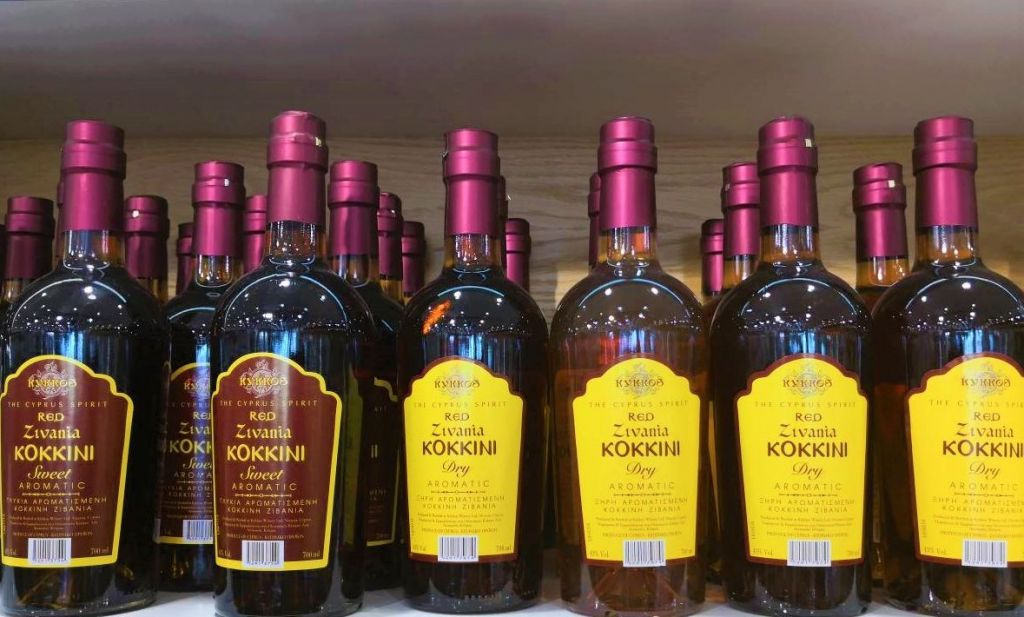 However, analysing the alcohol consumption on the island in general, you can see that no other liquor can outperform wine in popularity. 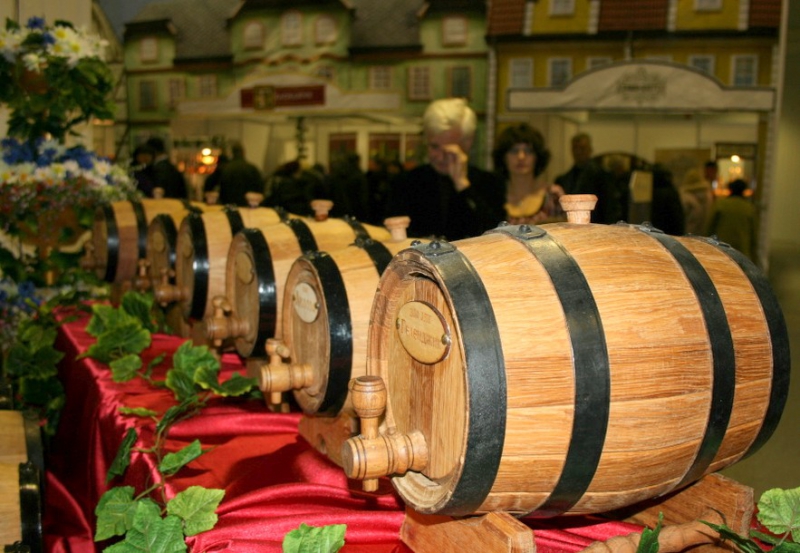 Annual wine festival in Limassol, where the best wineries of the island present their products.

Despite being similar to culinary traditions of Greece, Turkey, and England, Cypriot cuisine is quite an original culture. Any dish that can be tasted at restaurants all around the world has it unique flavour and colour in Cyprus. Let alone the recipes that are used solely by Cypriots! Each tourist visiting Cyprus should definitely get to know this part of the traditional cultural heritage in as much detail as possible.