After our children were born, we settled in Cyprus and didn’t leave it for as much as 18 months. During our living there, we managed to study the character, habits, lifestyle, and traditions of the islanders.

Greek Cyprus is a country with its own unique values and customs greatly revered by the natives. 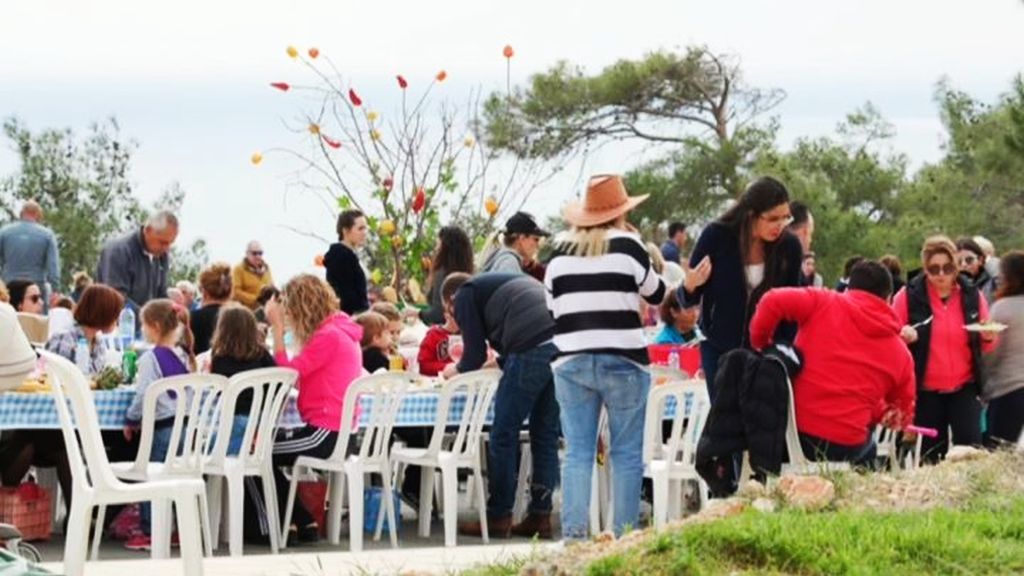 Cypriots love to gather for holidays with their families. For example, it is customary to celebrate the first day of fasting in the open air, with tables bursting with food. But only lean food.

Living enclosed on a small island affects the way locals think and perceive the world. We noticed that many Cypriots are very conservative and self-confident. They sincerely believe that they know answers to all questions. It seems like they consider their island to be the center of the universe. At first, we were slightly taken aback by such behavior and conceit, but then we got used to it.

Despite the above-mentioned sort of disdain towards the rest of the world, many parents try to send their children abroad, to Europe or the USA, for studies. Having left the island, young Cypriots realize that there’s a world beyond its borders. Some of them don’t even want to come back, and those who return seem to change greatly and adopt new features of character. They are friendlier, less conceited, and more open-minded as well as tolerant of others’ opinions, habits, and traditions.

When we came to the island for the first time, we were amazed that there are almost no “local” parents at playgrounds walking with children. The thing is, Cypriots prefer their children to do something useful that develops their mind instead of just lazing around outside. Thus, walks are replaced with educational clubs. And parents are ready to drive their children even to the other part of the island if their village/city has no suitable educational centers. 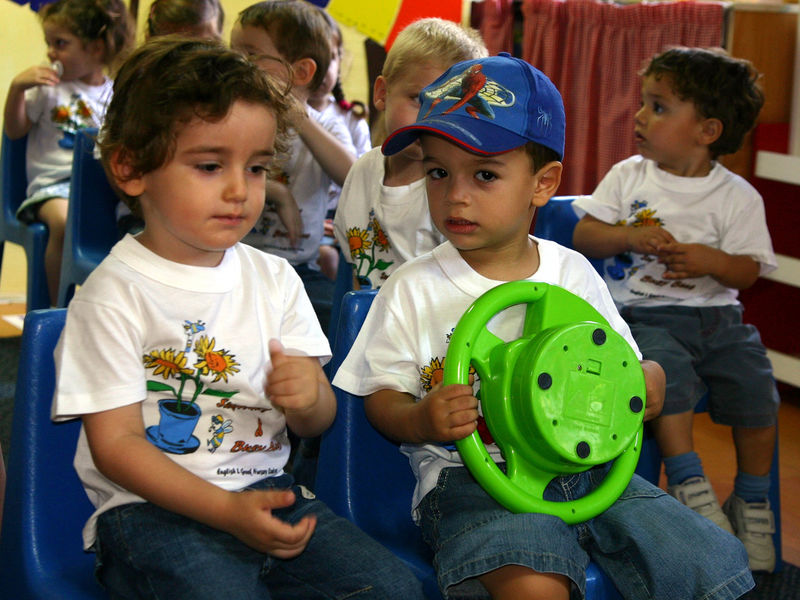 Even if children are allowed to go for a walk, they never walk alone. Their actions are carefully controlled by the parents. They can walk and play only near their house or visit their friends.

There’s a curious tradition in Cyprus. When a girl gets married, her parents must provide the new family with a house or a flat. Not an empty one, but fully-furnished, equipped with all necessary household appliances and nicely decorated. This tradition surely makes the newlyweds’ life much easier, but significantly complicates the life of the bride’s father, especially if he has several daughters. In this case, during many years, he has to earn and save money for several flats.

Why are we talking about dads only? The thing is, Cyprus is quite a patriarchal island. The women having accommodation are usually engaged in looking after children, cooking, cleaning up, and other household chores. They are classic housewives. While men are breadwinners. They work and bring home the bacon.

So, if a couple divorces, no division of property takes place. A woman and kids stay at the house/flat, while her ex-husband goes away and makes a fresh start. So, a woman doesn’t need to worry about accommodation. She and her children are always safe in this regard.

Local people almost don’t use the internet. With a small population, the significance of word of mouth and face-to-face communication, the locals don’t feel the need to develop it at all.

For example, there are very few online shops. And the shops operating offline don’t even bother to give their customers the opportunity to see on the internet what’s in stock before going to a shop. So, if you need to buy anything, – home appliances, furniture, clothes – you have to visit several shops to compare the quality and prices of goods onsite.

Some companies do have websites, but only few of them get regularly updated. When we were searching for a house, we studied a great deal of local real estate company websites and picked out a couple of offers. However, when we turned to these firms, we found out that many offers we liked were published several months or even years ago and were out-of-date. 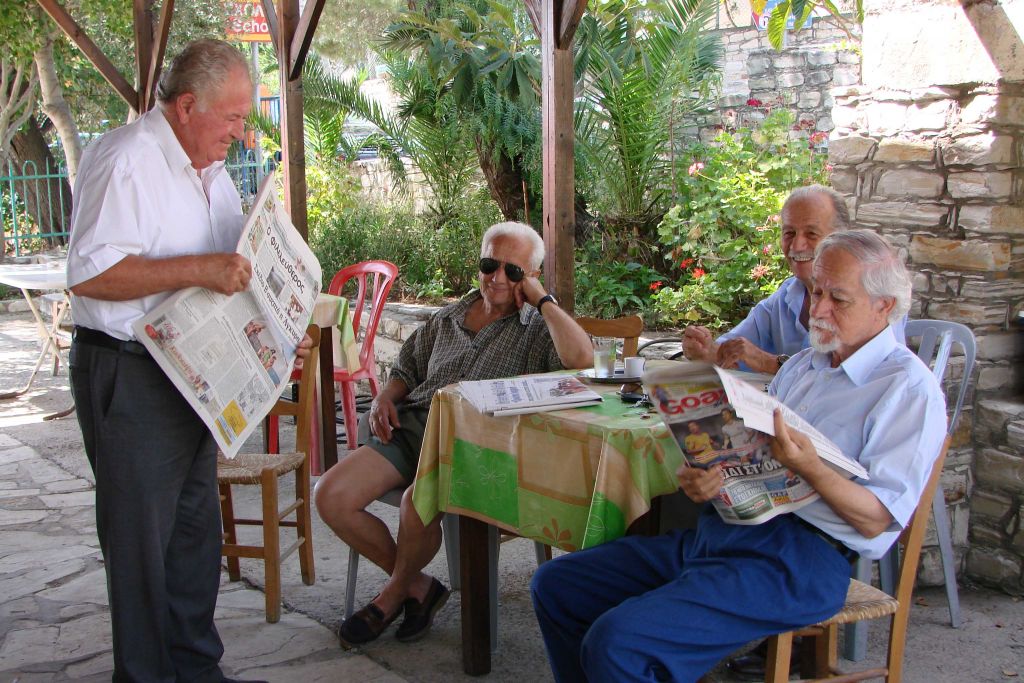 Food delivery also hasn’t managed to enter the internet yet. There are just no websites where you could study the menu and make an order. You can order food over the phone only. While we were living in Cyprus, we collected a great deal of food delivery flyers and ordered their meals quite often. It was surely sometimes inconvenient to talk over the phone, especially when our babies were sleeping in our arms or were crying loudly.

The quality and speed of local Internet connection, as a rule, leave much to be desired. Although free Wi-Fi is available almost everywhere, it’s usually very slow.

Many tourists are amazed at Cypriots’ indifference to the internet as more and more people across the world get used to staying online all the time.

The difference between the quality and price of connection in Cyprus and that in continental Europe is truly astonishing. For instance, we had to pay 72 euros a month to get the download speed of 25 mbps (the upload speed of 6 mbps). There’s cable internet in the city center though. It’s cheaper and faster.

One of Cypriots’ distinctive features is slowness. They do everything evenly, unhurriedly, and with dignity. Their demeanor and manner of speaking can be described as slow or even lazy in a way. 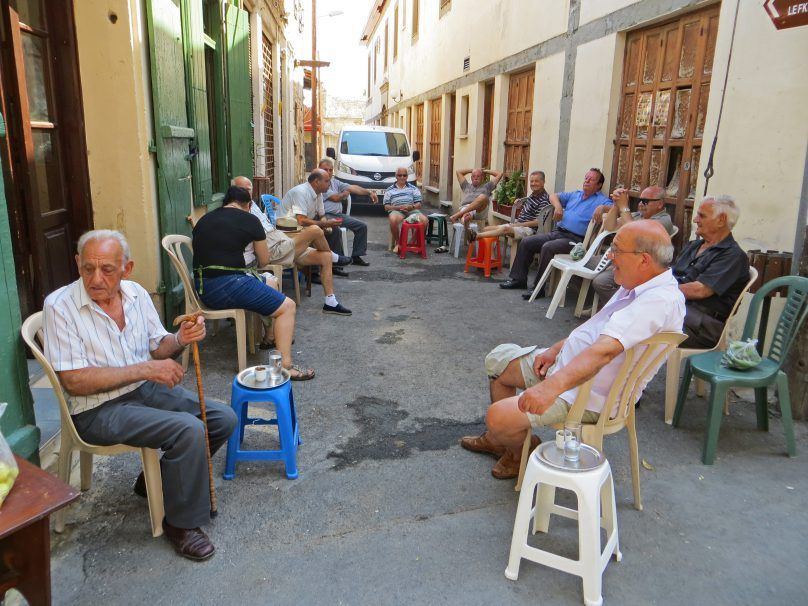 A leisurely conversation with a mug of coffee is the preferred pastime for many indigenous islanders, especially the elderly

Perhaps, the reason for this slowness is the permanent heat, when you don’t want to move without need (although sometimes it would be healthier to move more). And distances on the island, both inside cities and villages and between them, are rather small so Cypriots usually simply don’t need to hurry.

There are lots of street cats in Cyprus. They are tubby and fluffy. Locals constantly feed them. According to legend, cats once managed to save the island from a huge number of poisonous snakes whose population had grown during some particularly dry year. That’s probably one of the reasons why everyone loves and reveres cats so much here.

As for street dogs as well as pet ones, locals don’t like them and consider them to be “dirty” animals, which is typical of Muslim beliefs. Unfortunately, our doggy Lori had to experience this “dislike” once. 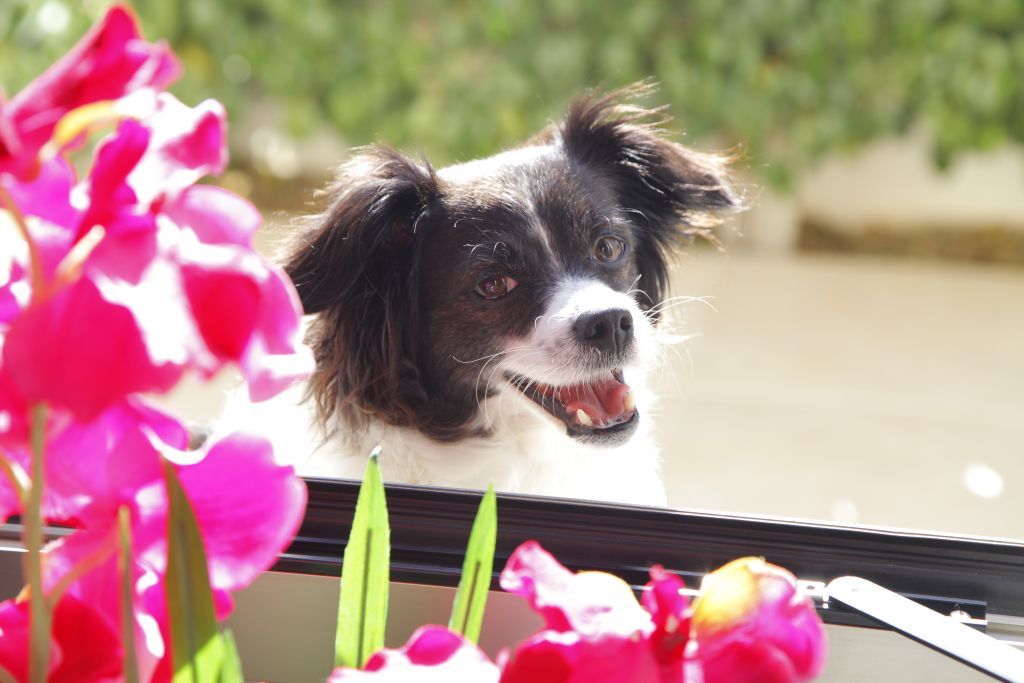 Friendly and playful, Lori is one of our family members

Lori often went for a walk with us and our babies. One day we were walking as usual, when suddenly our dog felt bad. She fell to the ground, her eyes started to roll up, she was foaming at the mouth…

We immediately began searching for the nearest open vet clinic on the internet. And, of course, the peculiarities of local internet played a cruel trick on us. Once we found an address, we grabbed Lori into our arms and rushed to the hospital. However, when we came there, we found that the clinic had been closed down long ago and the office was rented out. We were so desperate that we started to phone the number written in the announcement of the office rental. The person that answered didn’t have anything to do with the vet clinic. But, luckily, having listened to us, he explained to us how to get to an open vet hospital situated nearby. 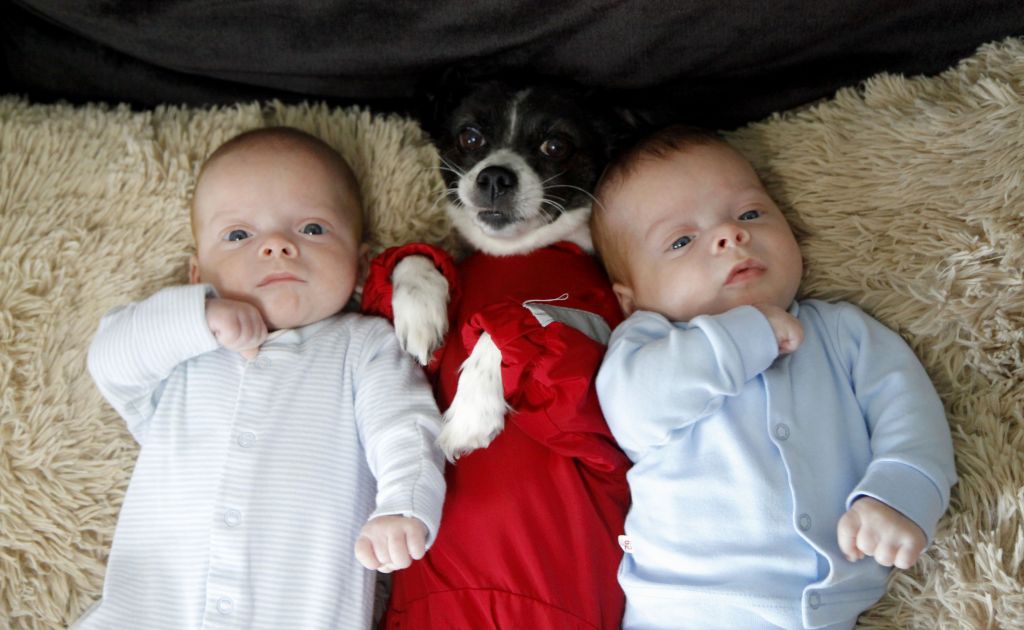 Lori is a wonderful little dog who adores our boys

We went there on foot. Our dog felt worse and worse. When we finally reached the clinic, vets told us that Lori was poisoned with something similar to rat poison. That’s how we discovered another habit of Cypriots’ – throwing food with rat poison around the streets, thus reducing the number of stray dogs.

Fortunately, vets managed to save Lori’s life. She came round quite quickly and felt perfect the following day.

The island of Cyprus is a popular tourist destination. It swarms with tourists from different countries all year round. Local citizens are always interested and curious to talk to foreigners. Getting acquainted with Cypriots, tourists are amazed at their exceptional hospitality. For example, they can invite new acquaintances to their home. They treat them generously and introduce them to their family. A startled guest feels special and surely believes that he/she found a cheerful loyal cordial Cypriot friend. 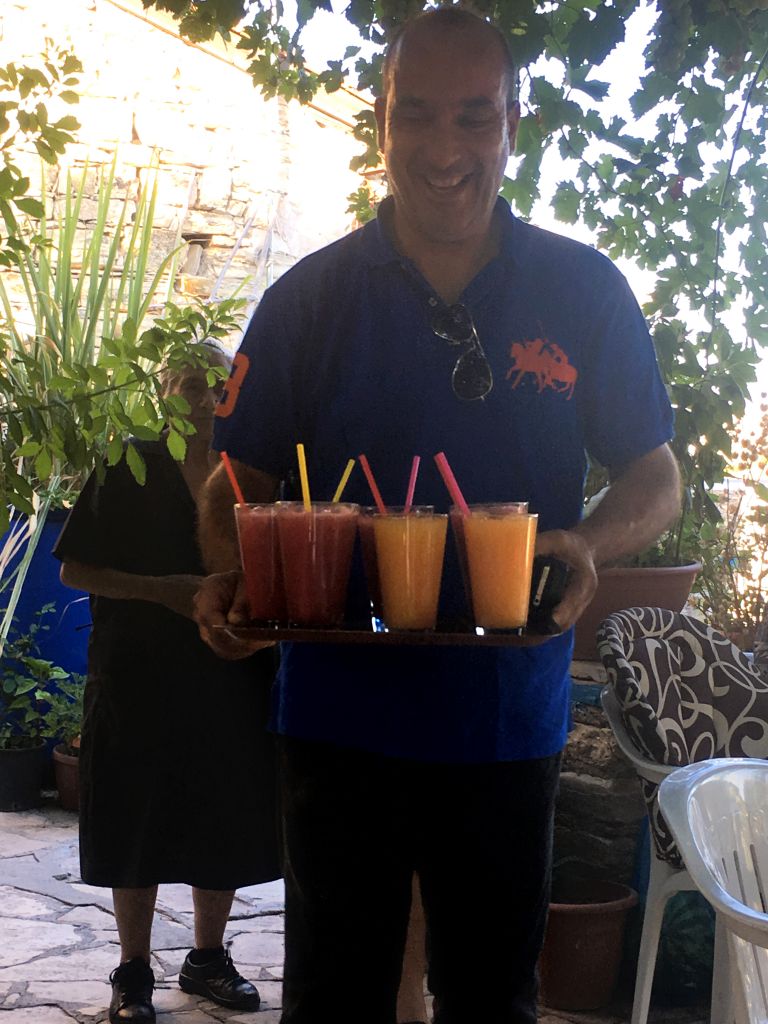 Cypriots are very hospitable, they always meet new people with joy and interest

However, when they meet for the second time, the Cypriot’s behavior often changes. They will still be friendly but a bit detached. So, the longer they communicate with one and the same person, the more detached they become, as they lose interest in them. These foreigners are replaced with others that, again, get surprised at Cypriots’ hospitality.

In conclusion, we’d like to point out that many Cypriots are friendly, smiley, and good-hearted.

For instance, when we were walking with our boys, many Cypriots came to us charmed by our kids, and we had a lovely conversation with them. Most locals know English so we rarely faced any difficulties with communication.

We and our friends celebrate the first birthday of our sons

In the following publication: how we prepared for departure from Cyprus.